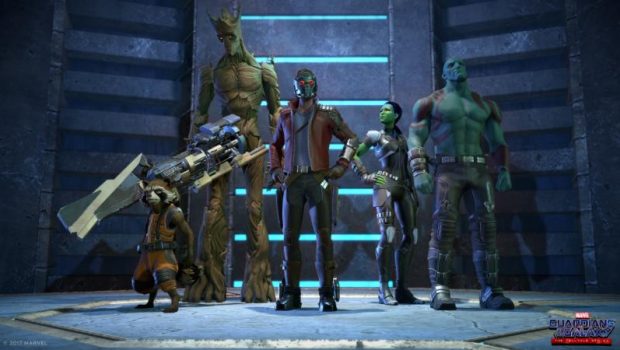 Marvel’s Guardians of the Galaxy: The Telltale Series – Season 1 Review

Summary: Telltale prove again that they can master any property they get their hands on.

Guardians of the Galaxy is the latest episodic adventure game on Telltale’s release slate to wrap up, so I thought I’d take a few hours to replay through the entire season and let you know just how this stacks up their previous releases.

It takes place with the Guardians already being an established name in the cosmic Marvel universe. They’re off doing their thing when they hear word that Thanos, the Mad Titan himself, has attacked the Nova Corps, looking for a mysterious artefact. When they arrive, they realise that Thanos is the least of their worries, as they are given chase by Kree leader Hala the Accuser. As the player you mainly control Star-Lord as you make the hard decisions and try to keep the team together long enough to survive, but briefly you may control the other members during flashbacks or action sequences.

This is Telltale’s first journey into the world of Marvel, and what better place to start than in space!

All the characters you loved in the original 2014 film and its sequel earlier this year are back. You’ve got Star-Lord, Gamora, Rocket, Drax, and of course Groot.

The first thing that stuck me about this game is that rather than taking the characters straight out of the films, much like the animated Guardians TV series has done, they went for the classic comic-book approach.

The designs for characters are more in line with the original comics. For example, Gamora has the classic yellow circles around her eyes, Drax’s tattoos are mainly on the shoulders, and Peter is a little bit older than he is in the films.

By no means is this a bad thing though. It was nice to see Telltale not relying on the cinematic franchise, and adds the possibilities of them creating their own little universe as well if they decide to adapt different characters.

The performances are also good, and start apart from their Hollywood counterparts. The standout performance is easily Rocket Raccoon, as played by the prolific Nolan North (Uncharted, Last of Us). He brings the right amount of anger to the roll, and if you’re familiar with the character from the comics this is very important. But on top of that, he does a great job at humanizing the character, probably even better then Bradley Cooper’s more comedic take in the films.

Talking about comedic takes on characters, Drax is fantastic. He’s played by Brandon Paul Eells, it’s his first major role in a videogame and he does an excellent job at bringing the laughs when needed.

Adam Harrington, you may know him as the lead in another Telltale series: The Wolf Among Us. He plays Groot, and proves that the character is much more than his one line of dialogue. Personally, I wasn’t a massive fan of Groot in the original film, although Baby Groot was perfect in any way. In the comics Groot really feels like the heart of the group, and they bring that across well here. There’s a moment near the end of the season where you get to control him for a scene, and it’s beautiful. You get the sense that Groot really does care about these people, and even though all he’s saying is “I Am Groot”, he’s also saying much more.

Alright, let’s talk about the two main members of the Guardians. Gamora and Star-Lord. We’ll start with Gamora. She’s played by Emily O’Brien, who is currently also playing a role in Telltale’s Batman: The Enemy Within. She’s pretty good! There are moments when I felt like O’Brien was trying to impersonate Zoe Saldana’s performance from the films, but near the end of the season she did make the character her own. Just small things like the way she talks about her training with Nebula, she’s good at putting in all the emotions.

Her performance however was also where I found my main major nit-pick in the game, and that is how the voiceovers are edited. They’ve cut out every breath! All of them, the characters never breath! Now, I work in radio and I know what if you’re editing an ad or a promo you cut out the breaths to make it feel snappier, so you can add more of the important stuff into package. But these are supposed to be characters. You are meant to believe everything they are saying, and that is hard to do when none of them are breathing! Okay, that’s my only nit-pick. Back to the review.

Peter Quill aka Star-Lord is played by Scott Porter (Injustice 2, Minecraft: Story Mode 2, Friday Night Lights). As I mentioned earlier, this is a slightly older take on the character. He’s been around, he’s seen things, but much like Gamora I felt like the voice acting didn’t reflect that.

I’m not saying that he’s not good, Porter does a great job at playing the character in the more emotional and darker moments. But when it comes down to the comedy… It does kind of feel like he’s just doing his best Chris Pratt.

I also feel like his scripting, especially near the start of the season, isn’t that good. There are many opportunities for the player to choose a more light-hearted approach for the dialogue, but I found myself going for the serious options. Not because I preferred this route for the character, but because the jokes were just so bad. They fixed this around Episode 3 though, and from then onwards the Quill jokes got better and better. He’s great in the final episode. One thing that people always bring when talking about Telltale games is if the decisions actually matter. Is this a Walking Dead situation, where the simplest dialogue choice could change the course of the entire season, or more of a Minecraft where nothing has any long-lasting effects.

This one is somewhere in the middle. There are few major decisions in the game that really do change how the final few episodes play out, and I really liked the scope of those moments. You feel responsible during the fallout of the more important decisions, and they were well done.

But in terms of character decisions and how you shape your relationships with the other Guardians it felt lacking. There are many moments when the game will ask you to side with either Rocket or Gamora, and rather than the decision feeling difficult to make in any way, it just felt tedious.

During the final episode as well, I felt like the choices I made didn’t matter that much. This is something that regularly happens in these types of games but usually they try to hide it in the storytelling, so it isn’t until you look up all the different endings online that you realise if your decisions were that important. They don’t even try to hide it here, and that is quite disappointing. If they do make a Season 2 though, they could easily fix this by bringing across some of the choices in this game and making them have real consequences.

Graphicly, I feel like this is the most consistent Telltale game to date, though to be fair I haven’t played Batman: The Enemy Within yet which is their most recent.

One thing I always notice with Telltale titles is that the first 10 minutes or so of each episode are quite glitchy and stilted. I only noticed that at the start of Episode 1, after that it was fine.

As I mentioned earlier, the character designs are great! I like that they are still going for the comic-book look. It doesn’t make the game head into that weird uncanny valley that a lot of these interactive stories can fall into.

The gameplay has also dramatically improved since their earlier titles.

There are moments when I wish the characters would walk a bit faster, but that’s just a very minor complaint.

They introduce a fun new mechanic with the puzzle element as well, in the form of Quill’s jetboots. You can fly up to new levels and do stuff. It’s not featured that heavily, and doesn’t dramatically change the game, but it’s a bit of fun.

Let’s wrap this up. All in all, this game was pretty good!

It’s got a few issues, mainly the voice overs in the early couple episodes, and a few of the decisions feeling a bit like filler, but this game succeeded in what it set out to do: Be a fun, funny action-filled adventure through space. If you love the comics, films or TV show, this is worth check it out.

It’s all the characters you love portrayed very well and you’re in for a blast.