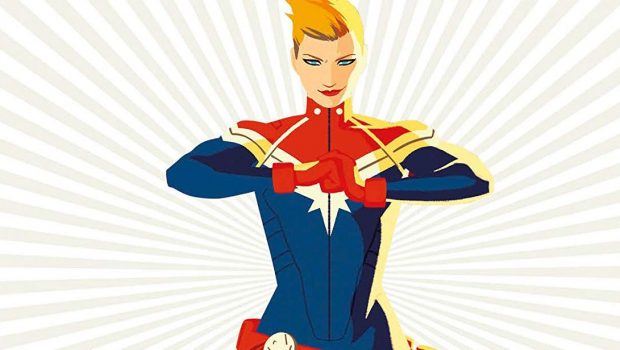 Summary: Marvel Fearless and Fantastic! Female Super Heroes Save the World is a true celebration of the diversity of the Marvel Comics Universe of female heroes!

Published by DK, this awesome book from Sam Maggs, Emma Grange and Ruth Amos is a true celebration of the amazing female superheroes from one of the best comic universes in the world… well universe, that of the Marvel Comics Universe… it’s exceptional!

Marvel Fearless and Fantastic! Female Super Heroes Save the World is beautifully presented and apart from the well-written text that gives the reader an insightful snapshot into these powerful female superheroes are the picture-perfect colourful illustrations which accompany their biographies and almost pop out of the page. At its core, Marvel Fearless and Fantastic! Female Super Heroes Save the World features over 50 amazing female superheroes from the Marvel Comics Universe such as the powerful Captain Marvel, or the lighting inspired Storm to Spider-Gwen who is one of the main characters in the new animated Spider-man which is out now.

The book even includes new characters such as Kamala Khan who is Ms Marvel and even Ironheart who took over from Iron Man. Needless to say, all these strong and intelligent superheroes collected in this book will definitely resonate with female readers of all ages and hopefully bring new readers to the world of comics. So while Marvel Fearless and Fantastic! Female Super Heroes Save the World may feel gender biased in terms of the characters showcased in this book, male fans of the Marvel Comics Universe will also enjoy the content as the writers give a great insight into these characters. Speaking of content, this book features a foreword by comic legend Kelly Thompson who wanted to be a comic book writer at an early age to her journey of writing of comics and how these characters inspired her. Following this is a short introduction about the potential origins of these characters and how the book is set into personality types that include Determined, Daring, Compassionate and Curious.

The first entry is on Captain Marvel who is Carol Danvers, a former United States Air Force Officer who was caught in the blast of alien device that bestowed on her powers beyond that of mortal man and woman. While the entry gives the origin on Captain Marvel, it even goes into some detail of previous superhero aliases such as Ms Marvel, Binary and even Warbird before Carol Danvers eventually adopted on her current name. Entries also feature a quote from the characters and who are their friends, allies and role models. Although short, it gives enough information for the reader to give them a good understanding on the character.

I’m totally going to be Tony Stark. Except for that weird facial hair.
– Ironheart (Riri Williams)

Another highlight of this book is that it doesn’t just focus on the main female characters of the Marvel Comics Universe that makes it an excellent introduction to those readers wanting to explore or know more about this universe. For example, there’s information on the hero Mockingbird (Dr Barbara Morse) to Misty Knight (Mercedes Knight) who is a private investigator and that with her bionic arm is able to generate magnetic fields, ice beams and even control other technology. I also like how new characters such as Ironheart (Riri Williams) are included who became Tony Stark’s protege and even became an Iron Woman. Now the artwork in this book… it’s amazing and ranges from traditional comic book based illustrations to paintings and every image in this book is stunning and successfully captures these characters to the core. I’v got a perfectly fine head. And I’ve got a more-than-fine brain.
– Gertrude Yorkes

Marvel Fearless and Fantastic! Female Super Heroes Save the World is a beautifully presented book that truly showcases the best superheroes from the Marvel Comics Universe. Not only is it insightful but provides the reader with the right amount of information to learn who these characters that is matched with equally stunning illustrations of these powerful female superheroes.