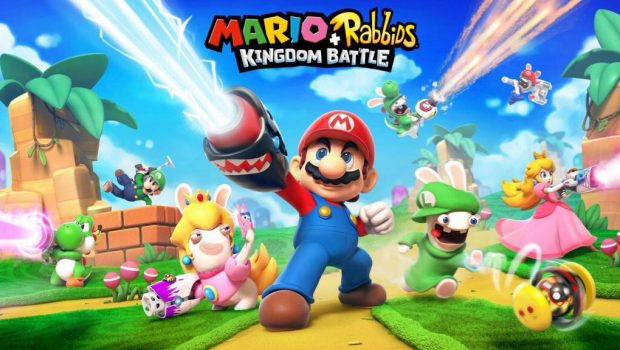 Summary: A strategy based game that's challenging and well-designed enough, it might just have you shrieking "BWAAAAH!"

Mario + Rabbids: Kingdom Battle was a title that nobody ever saw coming yet somehow, everyone knew about it months before an announcement. When the first leaked image of a Rabbid cosplaying as Princess Peach made the rounds it was safe to declare that nobody had asked for it and nobody wanted it. To merge a pure, time-honored series like Mario with the likes of characters best known for toilet humor and the attempted murder of Rayman seemed like a cardinal sin. Once the game was officially revealed at this year’s E3, the tables had turned. Kingdom Battle offers something new to the Mario series in the form of a turn-based strategy game focusing on armed combat- an idea so crazy for Mario that we now realize why it was necessary to include Rabbids (to make guns seem somehow less crazy). When a horde of Rabbids randomly wind up in a Mario superfan’s basement via a time travelling washing machine, they accidentally stumble on the SupaMerge, an experimental device that combines two objects together, and after merging themselves with Mario-related merchandise, somehow wind up warped into the Mushroom Kingdom for real, where chaos ensues. While a handful of Rabbids that landed in the Mushroom Kingdom come in peace, some of them are out to kill, and Mario has to stop the problem at its source, by going after the one Rabbid with the SupaMerge. Not without the help of Luigi, Princess Peach, Yoshi, and a cast of their Rabbid likenesses, of course.

The game is partially about exploring and solving puzzles, but the bulk of the gameplay is within the battle sequences where you must fight enemy Rabbids. You can only move a certain amount of spaces within each turn, but you can do so for every character in your team. The trick is to find a good point where you can launch an attack on a vulnerable enemy but still hide behind cover to reduce your chances of getting counter-attacked in the next turn. After unlocking the Skill Tree, you get access to a variety of different moves. You can pick between your main weapon or a sub weapon (though your sub weapon will take time to recharge) every turn for added depth. Each character also has their own special abilities, like Mario’s Hero Sight (letting him see when nearby enemies are on the move, and can shoot them down) or Rabbid Peach’s Heal. But you must be careful; it’s an even playing field- and your Rabbid rivals can do anything you can do, and often outnumber you.

Despite the Rabbid invasion, the game still feels like it belongs to Mario. Across four regions of the Mushroom Kingdom, Mario and his teammates explore the most realized incarnation of Mario’s world yet. The graphics are superb, for the most part, and there are no load screens between missions or areas. You have to give Ubisoft credit for giving the Mushroom Kingdom more life and feeling than any other Mario game to date. It tickled that part of me that’s longed for an open-world Mushroom Kingdom, even though each region is inherently linear. The accompanying music, provided by veteran composer Grant Kirkhope (whose repetoire consists of Banjo Kazooie and the recent Yooka Laylee), is as bouncy and fun as ever. Beginners be warned- this game might hold your hand throughout the opening hours but the difficulty level really sets in past the half-way mark. Losing a battle may only mean trying again, but in order to secure a win, you need to really concentrate. Plan moves ahead. Don’t expose yourself. A well-played battle can cost you half an hour’s play time, which adds handsomely to the game’s length. There’s plenty to do in the game, and you could be playing it for weeks to reach 100% completion, between the unlockables hidden throughout the world, the special missions, the challenge levels, and the admirable-but-hopeless pursuit to get a perfect score for every battle. It’s acceptable to have doubts about this game upon your first impressions, but give it a try and you’ll see that Mario + Rabbids: Kingdom Battle is a great game. While later levels can get a little bit exhausting you’ll find your dedication rewarded with a little hard work and effort. Just pretend you didn’t see the occasional poop joke and you’ll be fine.