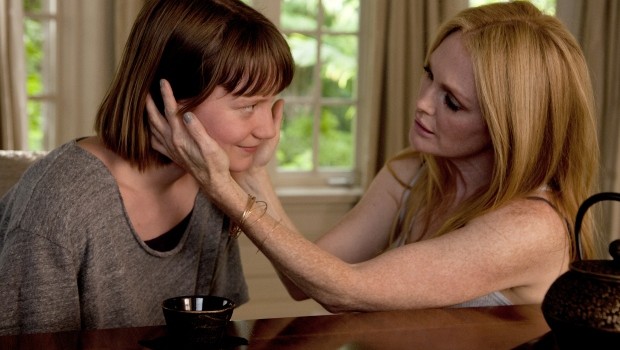 Maps To The Stars – Film Review

Maps To The Stars isn’t the leisurely stroll down Hollywood Boulevard that many may be expecting, but it is completely compelling with its intensity, valiance and dark satirical nature. David Cronenberg’s latest is a brilliant and in depth study of Hollywood as a culture and the personalities often found in it’s midst. The enticing, but incredibly evil screenplay is supported by superb performances by it’s cast, particularly Julianne Moore and Evan Bird. There is nothing nice about Maps To The Stars, but that is what makes it brilliant.

As a young woman, Agatha (Mia Wasikowska) alights the bus in Los Angeles and gets into a limo driven by aspiring actor, Jerome (Robert Pattinson). She appears to be just another hopeful that has come to Hollywood with stars in her eyes. However, Agatha is the estranged daughter of the high profile Weiss family who brought disgrace on the family many years earlier and was sent far away from her younger brother, Benjie (Evan Bird) who is a troubled teenager star not as concerned with his sister’s return as his mother, Christina (Olivia Williams) and father, Stafford (John Cusack). Stafford finds out about his daughter’s return to Los Angeles from one of his clients, actress Havana Segrand (Julianne Moore) who Agatha has started working for. Havana suffers with classic Hollywood problems of her own, fuelled by the spectre of her actress mother, Clarice Taggart (Sarah Gadon) who died in a fire when Havana was young.

Maps To The Stars paints an incredibly dark portrait of modern day Hollywood that doesn’t shy away from the ugly side of the industry that the power people work so hard to cover up. Despite having a confronting and evil personality which many will find too much to forgive, the film is awfully sure of itself and committed to it’s purpose and what it is representing. Maps To The Stars has been likened to films such as Sunset Blvd which are technically making fun of the industry that they are made in, but this modern day Hollywood tale doesn’t have a problem showing it’s audience the uncensored and often shocking world of debauchery the stars inhabit. Bruce Wagner’s screenplay is brutal and twisted, but brave and brilliant in the way it doesn’t give the audience the satisfaction of knowing exactly where it is going.

Although it is a satire and exaggerated for entertainment value, there are elements of the film which are intriguing case studies of the industry’s culture and certain Hollywood stereotypes. There are the little idiosyncrasies in the characters that those who are familiar with Hollywood types will recognise and other relatable cultural aspects of the town such as the minimal degrees of separation between everyone and the paranoia (and often truth) that everyone is only out for themselves. Maps To The Stars also shows how the world of excess that comes with fame and fortune can seem idyllic on the surface, but it is this excess that leads to the evil doings that are read about in the media and seen in the film. The more people have, the more they have to get in trouble with. The film seeks to answer the question that many ask after reading about celebrities in tabloids who go rogue, how do they go off the rails when they live such a charmed life? They have access to far more that they need and as a result, have far more that they can lose. The depth of character in Maps To The Stars is extraordinary. While the film is first and foremost a case study of Hollywood and it’s inhabitants, the characters also exhibit characteristics which are not mutually exclusive to that group of people. Havana Segrand, played flawlessly by Julianne Moore is an incredibly well crafted character whose characteristics represent those not only of such a Hollywood star, but also of a damaged person. Havana represents the child of Hollywood who has grown up in the shadow of her beautiful and talented mother. Now facing the reality of becoming a Hollywood “has been” and actively trying to avoid self-destructive behaviour (which doesn’t always work), she feels her mother’s ghost even more so. She see’s in the mysterious Agatha a chance to redeem herself in her mother’s eyes, due to the similarities between the girl and Clarice. Havana is an example of one who did not have the relationship with her parent that she would have and is continuously looking for a way to feel atoned. Moore is spectacular and makes the character of Havana one who is intriguing and, like many celebrities who are on the path the disaster, the audience cannot wait to see what she does next.

The Weiss family are an extremely troubled with many secrets which they try to keep hidden from the world as well as from themselves. Whether in the public eye or not, it is not uncommon for children to repeat their parents mistakes as they learn from them just by watching as they grow up. This is the case with Agatha and Benjie, but in particular Agatha who understands to an extent what is happening while Benjie is too young. Evan Bird is wonderful as Benjie Weiss. He is incredibly hard to like as he represents the spoiled and arrogant child star, but at the same time is fantastic to watch. He is the representation of the young star who truly misses out on being a child due in part to being introduced to alcohol and drugs at such a young age. Even though he is a character one loves to hate, he is sympathized with at certain moments in the film where he is on the verge of feeling real emotion, but stops himself in order to protect his persona even only in front of himself. Mia Wasikowska shows her superb acting range in Maps To The Stars as Agatha is many things. Although eighteen, she is still very much the little girl that her parents neglected. Her father says “I don’t know who she is anymore”, and Agatha feels much the same way about herself. Her identity is lost somewhere in her parents and brother’s identities, but she also looks to Clarice Taggart for clarification. She also tells herself and Jerome lies that make her feel better about herself and forget where she comes from. Agatha is an extremely twisted character who seems dangerous and psychotic, but also just very confused about who she really is.

Maps To The Stars is a rare film that delves deep into the world it exists in and tells an intriguing narrative at the same time. It’s confronting look at the world of excess that exists in Hollywood in the twenty-first century will not be to the liking of many, but will entertain those who appreciate the reasoning behind the madness.

Summary: Maps To The Stars is a rare film that delves deep into the world it exists in and tells an intriguing narrative at the same time.