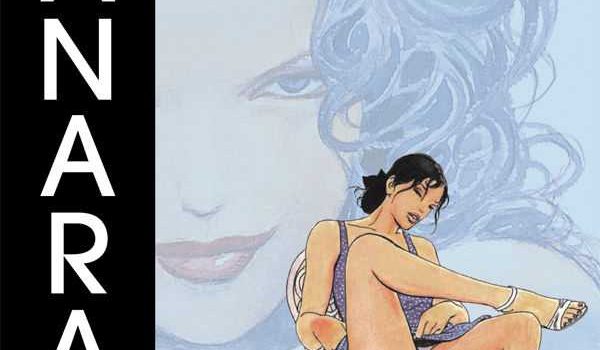 Summary: "Erotica" from a time past. Mind control or "liberation"?

The title of this book left little to the imagination… clearly it was going to be a bit racy. I was curious what a racy comic would be like… then I read it.

I honestly am not sure how to tackle this review. I’m sure there will be people who will jump to Manara’s defense and say it’s “freedom of speech” and “it’s art”… in some ways they are right… but it would also be right to say this collection objectifies women and arguably advocates treating them as merely sex toys for men to use how they wish. It’s important when looking at this book to read the foreword… it does give context for the stories… but it does not (despite perhaps trying to) excuse them. We are told that these stories came about at a time when Italy, specifically it’s women were becoming more sexually liberated… that the laws were changing in women’s favour (honour killings being criminalized)… but then it is almost implied that therefore these stories are about the liberation of women… if that was the case then surely the women would be the ones in control. The core concept in these stories (at least the main ones “click”) is an interesting one… the notion of an implant that can control someone’s “mood”… it could very easily be used in a science fiction story in perhaps a less erotic way. Unfortunately in Click the premise does tend to blur the lines between consent and rape… sure the main character can be heard asking people to “please” her… but her requests are only a result of being manipulated. There are some other elements of the story that touch on very sensitive topics and could potentially be upsetting to readers.

If nothing else Manara does have a lovely art style… the figures are clean and crisp. The lack of colour for the most part simply helps to prevent confusion and keeps the viewers attention where Manara wants it. This is listed as “graphic literature” but I can’t see it as anything other than pornography. I’m not against pornography by any stretch of the imagination… but I am uncomfortable with the notion of lack of consent and there is a lot in this collection that screams of lack of consent. At the time it was created I’m sure this was more socially acceptable but in today’s society I suspect this will be less frowned upon because of the graphic depictions of sexual acts… but rather the circumstances surrounding those acts. It is also claimed that “perhaps the box didn’t work”… which I suspect is an attempt at a “get out of jail free” card… the notion that “ah it was really just her inner desires coming out” defense.

The problem with that is the fact that the story begins with the main character unaware of the box, not in sight of anyone directing the box at her or in any other way aware of someone manipulating her… therefore the only reason why she would suddenly act the way she does must be some form of connection (it can’t even be said to be a placebo effect because for a placebo to work there still must be some awareness of a “treatment” being administered). I can’t really recommend this… If you are after sexual explicit comics and you are a male and have no issue with both forced and implied forced sexual acts then this is right up your alley… but I also hope that you don’t treat people the way the characters in this book treat others.