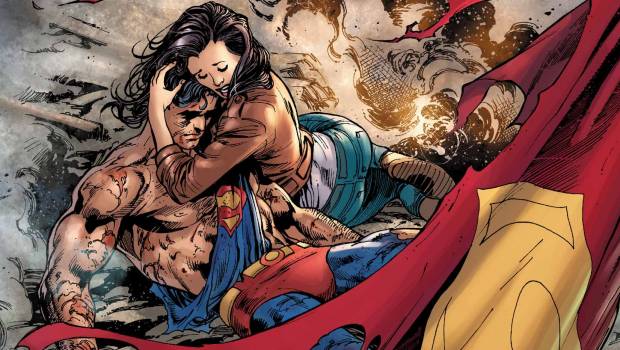 Summary: Part 5 of the Man of Steel Mini-Series

Things are starting to wrap up in the 6 part mini-series of Man of Steel by Brian Michael Bendis. So far this new adventure with Superman has been absolutely fantastic and makes me excited to read Action Comics and Superman. Working on those two titles will really give Bendis the chance to stretch his legs and show if he still has what it takes to produce some amazing stories and honestly from reading Man of Steel, he’s still got it. This issue has a lot of internal dialog of Superman talking to the reader as he pretty much gets his rear endhanded to him by Rogol. Superman gets Rogol off the Earth to prevent innocent bystanders from getting hurt, which was probably good too because you don’t want those people seeing you get beat down either. I mean,Rogol wrecks him pretty good and leaves him left in shambles on the moon. After being left on the Moon, Superman takes a moment to think about what happened back in the apartment when his Father Jor-El pops up to tell them he wants to take John. This is used to really show us what happened which is a cliffhanger they have been tugging on us with since the first issue. The story then pops back to Earth where the new Deputy Chief is trying to find the pattern between all the random arson cases back in Metropolis. This moment is cut short when the fire alarms go off for another fire that has sprung up. Unlike the previous times, Superman isn’t there to save the day. Supergirl shows up to save the day this time which makes her concerned for the well being of Superman. However, she isn’t the only one concerned about Superman as the Justice League also show up to voice their concerns. Supergirl comes to the realization that Superman would have taken Rogol off the planet to prevent casualties then shoots off like a rocket to the moon where she finds Superman all busted and broken. Back at the Hall of Justice, Superman is stabilized where he and the Justice League mull things over about why Rogol would be there and what his end game is. I will not really go into depth about what they discuss but Superman does gather his thoughts and runs off again after Rogol. Will he be successful this time? Well, that we won’t know yet as this story should wrap up in the last issue of this mini-series. This story has been amazing since the first issue and this one really just continues to build on that. Once again, the artists brought their A game and produced a beautiful comic. Some of my favorite pages being the parts of the story with Jor-El; it is just incredible work. The action in this issue just felt and looked beautiful. They actually made Superman getting his butt kicked a work of art. DC Comics and this team have delivered yet another amazing issue to this series and I give it 5 stars. This mini-series will be one for my collection and I think a must have for any fan of Superman. Go out there, get this issue and enjoy this amazing work and I hope to see you on the final review for issue 6 next week.