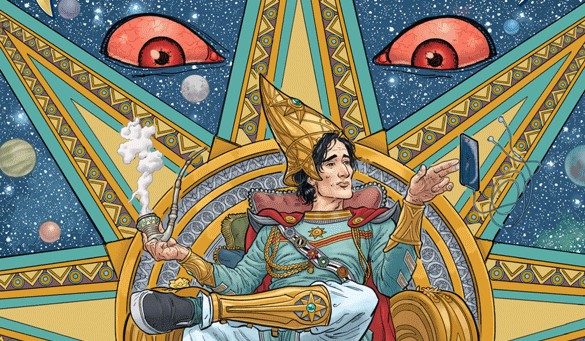 With his father dead, it’s up to Willy to step up and take his place at the new Maestro. Armed with the most powerful spell in creation, and a list of reforms that not only alter but annihilate the status-quo, Willy is set to make some drastic new changes, as he gives the high council of wizards the middle finger. Maestro #2 begins with Willy, now the new Maestro, paying his respects and “grieving” at a memorial he built for his father and the royal family. He then receives every ruler in his realm, welcoming them whilst accepting offerings in honour of his new leadership. People are here to bestow gifts upon him and thank him for his gracious new reforms – that focus on freedom, liberty and justice. Unfortunately, not everyone is as pleased to accept these new changes, especially the council of wizards, whom this directly effects. Their council is dissolved, and no longer will they squander the poor and reap the benefits from the suffering of others. It is the time for change and liberty, two empowering and positive changes, right? Not necessarily. Next to arrive for the greeting party is Lord Rygol, a tall and menacing pale elf, who looks like a bad egg if ever I’ve seen one. He is Willy’s old headmaster and a member of the high council, and he and Willy share a rather prickly past, involving punishment and torture. His arrival brings a smile to Willy’s face, not just because of the power shift, but because of the appearance of one of his apprentices, a young woman called Wren. A positively glowing reunion, that is also a bit of a double-edged sword. William in now the most powerful wizard in existence, wielding immense control and influence. No one is higher than he, and with his new position comes new enemies. I guess it doesn’t help that he squashed the council, changed the laws and instituted drastic new reforms – as well-intended as they are – rather abruptly and with a disregard as to who it would piss-off in the process. These reforms, funnily named the “Khaleesi reforms”, are all about freedom and liberty and freeing the supressed and downtrodden slaves that have been persecuted for generations. He has also changed the focus of magic, so as to help improve the lives of his people. All of this sounds wonderful and it has already improved the lives of many, however, it has also angered countless wizards and mages, thus creating a helluva lot of new enemies. The exact same problem that the Khaleesi encountered herself…an ironic twist. Enter, the evil mastermind himself, Lord Rygol, a sadistic imp, who looks a lot like an elf straight out of Lothlórien, a particular detail that doesn’t go unnoticed with Willy. This guy IS brutal, and definitely one to not be underestimated. Steve Skroce also introduces us to Willy’s love interest, Wren, who is an apprentice of Rygol’s. Their relationship is complicated, and reveals some rather unexpected plot developments. The art is alive with insanely wild and wonderful details. I really love how Skroce creates a diverse and eclectic visual experience with the turn of each page. Firstly, I have to say that some of his monster designs are beyond excellent, and the more grotesque they are, the better! To the hulking cactus wizard, to the worm infested Mardok, each of these characters, even the background ones, are wonderfully unique and detailed. I also love how Skroce doesn’t shy away from drawing gore and disturbingly grotesque scenes. Sinew, blood and guts aplenty in this story. If you’re going to die in this world, it isn’t going to be a clean and peaceful experience, but rather a hectic and gruesome event. I should also mention Skroce’s ability to capture the cheeky and somewhat arrogant expression on Willy’s face perfectly. His smug smile is perfection, and even rubs me up the wrong way, and I’m on his side! The colouring, by Dave Stewart is wonderfully bright and vivid and captures the sense of magic of this world. Maestros #2 is an entertaining chapter in this story. There were a lot of laugh-out-loud moments for me, and I particularly loved spotting all of the geeky references to pop culture that Willy makes. The plot thickens, as we are introduced to Lord Rygol, who heralds an even darker and more complex shift in the narrative. I’m looking forward to where this story will progress and how things will unfold for Willy. I recommend grabbing a copy and immersing yourself in this dark, twisted and downright funny tale.