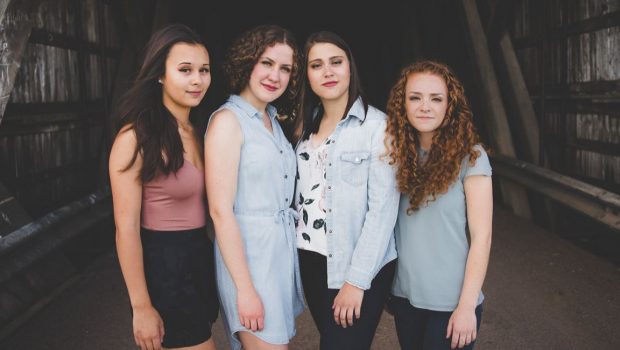 We catch-up with the awesome Lumber Jills before they captivate the attendees of Low Light with their amazing brand of Canadian music as they describe as “Old time” fiddle which is a blend of cultural influences.

Tell us how you came up with the name THE LUMBER JILLS?

We live in the Eastern Canadian province of New Brunswick and there are many forests. We are next to Quebec and just above the USA and bordered by The Atlantic ocean. The Lumber Jack is a trade long held in Canada and especially the eastern seaboard where we live and they were men who chopped trees with axes. (Stay with me here.) The lumbering camps were full of Irish, Scottish, French and English immigrants making their way in the new world and often the only bit from home they could bring was a fiddle to pass the cold long hard Canadian winters in camp. Fast forward to WWII and fiddle was huge in the dance halls. A man from New Brunswick had a cheeky dance hall band called Don Messer and the Lumber Jacks and they swept the nation on national public radio. They burned up the dance halls. We play that same old fashioned style of Canadianna fiddle. It was made for dancing. And so our name is an homage to those cold nights in camp for early immigrants and the joy of dance and what we call “old time” or “down east” fiddle. How did you meet and form the band?

We were all very young students of Stacey Read who wanted to inspire us with an end of year trip back in 2014, when we were teens. We were her oldest students so she took us to Ireland. It just grew from there. Stacey is our Artistic Director and she owns the New Brunswick Old Time Fiddle Company. Because of the success of The Lumber Jills there are now younger groups of women called The Junior Jills and The Little Jills who also tour more locally and share the love of  “Old Time” fiddle. Stacey’s longtime band-mate and friend owns and International booking agency (Garrison Hill Entertainment) and she started using her contacts to tour us. It happened really fast. Our organization, and all of us really work to teach the younger ladies the business of music, composition, touring and marketing. Most of all we really try to share the genre and ensure it’s continuance. It’s the lesser known style of fiddle but we are working hard to change that!

How would you describe your style of music?

“Old time” fiddle or “Down East” is a blend of cultural influences. It’s very popular in the Canadian provinces of Ontario, Quebec and New Brunswick. In Canada our earliest immigrants were Irish, Scottish, French and English but you definitely hear the influence of our indigenous peoples. It has more of a country swing feel to it and it’s very clean fiddling. There is great accuracy and not a tonne of ornamentation. It was created for dancing; barn dances, hall dances etc so quick, joyful and fast with a lot of feel in the music. Keeping folks on the floor was the whole reason for it.

We are very lucky to have elders and mentors in New Brunswick. While we certainly love Cape Breton fiddlers like Ashley MacIssac and Natalie MacMaster; their tradition is very different from ours. They are decidedly celtic / Scottish. So our inspirations are from our provinces like Ivan Hicks still performing at 70 years old and of course our teacher and director Stacey who writes and arranges for us and with us. There are others who paved the way in New Brunswick, like the late Matilda Murdoch and Ned Landry who both played until their late 90s. These were not wealthy renown people but those who kept their tunes close to the floor and made their talents available to everyone. They wrote a wealth of tunes. These are our influences. This is how we remain an authentic voice in folk music. We have a sense of place.

As a band, how has your style changed over the years?

Travel has been a great influence in our confidence. Our playing is definitely more confident and we take more technical risks. For instance we all started as competition players so think of like a spelling bee but for fiddlers. Not much emotion. Mac (piano) played a great deal in church too. So now we connect with folks more in a live setting. We feel a direct responsibility to these tunes and so we perform them in a way that Ned, Matilda and the others would approve of. We also are close as friends and we can sense each other’s playing more which really makes the stage a comfortable place for us. In the last year we’ve been incorporating our own compositions into the show as well so it’s really been an amazing environment to learn our craft – remember we were in high-school when this started! What are you most looking forward to playing at the National Celtic Festival punters in Port Arlington?

Australia is going to be overwhelming. Think how far away we are! From what we’ve read and seen online about The National Celtic Festival we believe it is going to be a completely immersive experience. We’ve heard the fans and attendees are the best anywhere and we can’t wait to represent Canada. The thing we are most looking forward to is to hear everyone’s stories. To hear about the tradition in Australia of fiddle, to hear the feedback from the audience and see what tunes resonate the most – will they be the same tunes we love best? Across continents do traditional music lovers speak the same language? It’s going to be fascinating and totally emotionally charged for sure.

Have you been warned about the weather?

Ha! We are Canadian so we are pretty resilient. Our Spring is still colder than your Fall so we shall see. Remember we sometimes get snow in Summer. True fact. We can handle rain, heat, snow, fog, wind but what we are very concerned about is the spiders. We hear more scary stuff about Australian insects than the weather. Please don’t judge us if we are screaming on a table somewhere. Like seriously how big do those things get?

Lastly how would you sum up the experience to attendees to the National Celtic Festival punters in Port Arlington?

The Lumber Jills is really about the sum of the parts. We are the embodiment of a deeply historical Canadian story of immigration, collaboration and tradition. For instance two of us are first language French speakers and two are English. The french where we live are called Acadian. Amelie and Janelle are direct descendants of the first french settlers that pre-date the confederation of Canada. New Brunswick is the only officially bilingual (French / English) province in Canada and so in our band we speak two languages. Machaela is more Scottish and Martha has a mix of all cultures. With that comes the traditions of step dance so the four of us all dance traditional step but our influences are all different from Irish, Scottish and Acadian. And then we sing in English and French. We also perform something called “Step Assis” which is french for seated step dance. All these things combine help us give you a real sense of what it is like in New Brunswick and that is our goal; to share our culture and history. We want you to clap, stomp, dance, sing and be part of our story and show. That is the ultimate goal for us. To be in this with the audience at National Celtic Festival. Thank you! Merci!

For information on Low Light, check out http://lowlightqueenscliff.com.au/index.php?option=com_content&view=article&id=1&Itemid=101