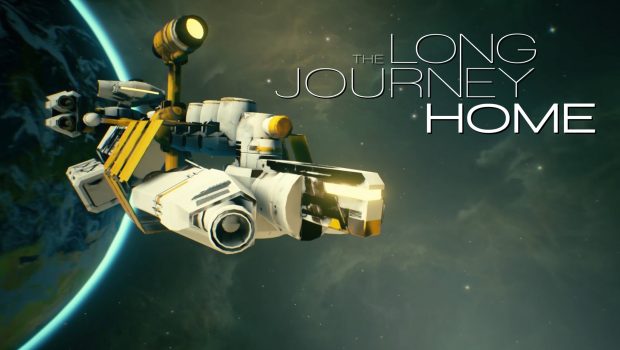 Summary: Space the final frontier... this is the attempt to return from that frontier.

Space exploration is a tricky thing… there are other species to contend with, hazardous planets and other dangers. Normally these things are experienced on the way out, The Long Journey Home starts with you having successfully (well that’s a relative expression) flung yourself via a new jump drive to the other side of the universe. But all is not lost, you have four crew members, a planetary lander and the will to survive and get home… the question is how. Some of the material that came with this game reminded me of the old manuals you used to get when you had to install games from discs (does anyone else remember those days). One comment stated something along the lines of “easy to play, tricky to master.” and upon my first few play throughs that was absolutely the case. Gravity can really kick your butt when on lander missions and even when performing a gravitational slingshot if you get your trajectory wrong you can find yourself heading straight to the center of a star. But after a few tries I started getting better… I was still suffering more than succeeding but there was a sense of achievement. Now as much as I enjoyed this sense of adapting to the steep learning curve… I was thrilled to fire up the game and learn that the developers had listened to the players concerns about just how tough this motley crew had it and they introduced a “story” mode… essentially this drops the danger factor right down, it’s still there but it doesn’t feel quite so futile when you start your trip back. The overall game is kind of a mash up of a few different games, the developers even state “if you’ve played lunar lander or similar games then the resources collection missions will be familiar”… that is true… but now there are added weather effects and gravity is far more harsh. Special interaction often reminded me of Star Control (1 or 2) with some interesting conversations. Combat is also similar to Star Control in the sense that it’s a top down view and essentially involves making passes of your enemy, firing a broadside whenever possible. There are also random encounters (well the whole thing is procedurally generated so…) alien artifacts, brothels, slave traders, pirates… there is so much to explore in this game that you may end up forgetting you are supposed to be heading back to earth and instead just go wandering. Before each game you are asked to supply a seed code… basically you just punch in whatever letters or number combination you want and the game takes it from there… My most fun so far has come from seeding based on “Prometheus”… I’ve used Nostromo, LV426 and other familiar combinations.

Each play through is going to be different and it’s simple enough that it makes for a good pick up and play title. It also has one of the nicest notes I’ve seen on a game recently, when you go to quite it tells you “your game will be saved”… to often these days (especially with console ports etc) you can’t be too sure if you’re at a point that will be saved or if when you return you will find yourself some way back in your journey… so it’s a small but nice element.

A good fun game that has a lot of replay value.