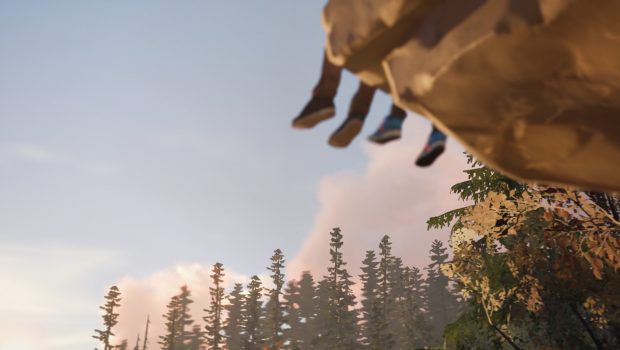 Summary: Delivers a heavy dose of truth through beautiful narrative.

Aristotle claimed that art imitates life and that, through art, we better ourselves. Our exposure to art allows us to gain new knowledge and perspectives and to undergo catharsis—to process our emotions without the need for direct exposure to tragedy and its associated consequences. But Aristotle also believed that distance was required—for a degree of untruth to be present—if people were to truly connect with, and benefit from, art.

Life is Strange 2 purports to be a fictional narrative about two brothers on a road trip, but it is steeped in unfortunate truths. Sean (16) and Daniel (9) Diaz are young Americans. However, because they had the ill fortune of being born the sons of an immigrant and because their skin happens to be brown, the Diaz brothers are treated as though they do not belong. They are Others in a land that seems openly hostile to them, for no reason other than their own existence. The prologue ends—and the brothers’ road trip begins—when their father is shot and killed by a white police officer responding to a minor altercation between children. The officer prematurely draws his weapon and subsequently murders an unarmed brown man who was in no way being aggressive. This is not fiction; it is mimesis: an imitation of reality. Unarmed men—and children—of colour are exposed to police brutality and racial profiling on a regular basis. Innocent people are hurt or killed by those wearing badges—who, coincidentally, rarely face repercussions.

The Diaz brothers, born and raised in the United States, are told by an antagonistic neighbour to go back to their ‘own country’. Later, the brothers are accused of stealing—despite no evidence—and then assaulted, kidnapped, and imprisoned. The captor threatens to ‘call ICE’ to see if Sean is even a citizen. The language is not fiction: it could, and does, just as easily come out of the mouths of people—not just in the United States, but in other countries (including Australia) also. These actions are not fiction: people of colour—citizens or not—are routinely harassed, ostracised, threatened, beaten, and arrested without purpose or just cause. In fact, the most unrealistic aspect of Life is Strange 2 is not that Daniel has supernatural powers but that the boys are able, despite the various forces at work against them, to remain together, free (at least temporarily) from the clutches of the government. They are not forced into separate foster families or imprisoned on an island detention centre, not forced to represent themselves at citizenship hearings or murdered by a police officer.

Near the end of the episode, Sean stands beside a plaque commemorating the destruction of Arcadia Bay—the setting of the first Life is Strange as he surveys the devastation. The scene is solemn, but its true power lies in the juxtaposition. Such a prominent disaster is, of course, an event for which we should express our Thoughts and Prayers™, but there is no monument to remembering the everyday disaster that is systemic racism. For the Diaz brothers—and many like them—this is merely their harsh reality. And while we should certainly care about the climate change allegory present within this scene, more important is the notion that Sean and Daniel Diaz are simply two of many children facing an unfair and unjust world. The fiction of Life is Strange 2 is steeped in cold, unpleasant truth. If the more accurate maxim lies not with Aristotle, but instead with Oscar Wilde’s ‘life imitates art’, then Life is Strange 2 demonstrates our possible pathways. We can be explicit aggressors like Hank Stamper, whose prejudice runs so deep he can justify physically assaulting a 9-year-old. We can be passive enablers like Doris Stamper, who shows no malice but stands silent while injustice is done around her.

Or we can do the right thing, like Brody Holloway, who treats the Diaz brothers like actual humans, listens to their fears and needs, and then helps them. If we can learn anything from Life is Strange 2, it is that—no matter where our road in life takes us—we can afford to be kinder to the people around us.