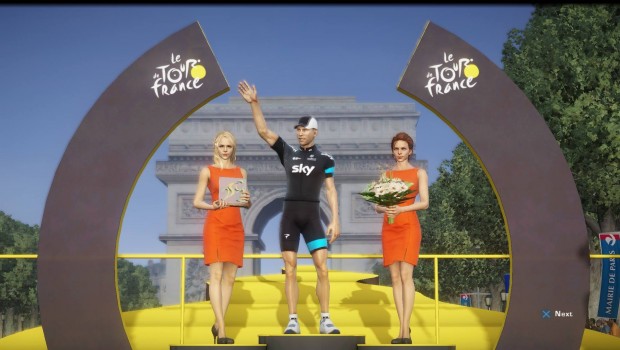 Summary: Not quite the ride of your life

Le Tour de France—the actual cycling event—is about riding bikes really fast around mostly-France in order to win a variety of strange-coloured jerseys. Cycling is a team sport, and success in the most gruelling and prestigious cycling event in the world requires excellent teamwork and unparalleled understanding of strategy. I know absolutely nothing about cycling. After playing Le Tour de France 2014, I now understand a little bit about cycling. I’m still no expert, but success in this game requires you to pick up a few things. However, my tour de force required a lot of trial and error. Le Tour de France 2014 is not for the uninitiated; the rules, modes, and tips sections bombard you too many technical terms and not enough useful information. (The handful of typos don’t help.) Expect to feel overwhelmed.

Fortunately, racing is a relatively simple affair. Speed is controlled using the R2 button, and the L1 button changes between high- and low-gear ratios. High-gear ratios require more effort but allow for greater speed; knowing when to step up the pace is an important part of race strategy. As cycling is a team sport, Le Tour de France gives you access to the Team Comm: hitting the Circle button brings up information on your teammates—and puts your rider into Auto mode—where you can adjust strategies, deliver instructions, or take control of another rider. Le Tour de France feels like a more-complicated cycling version of a car racing game. Being in front is not enough to win. You have to make considerations for player fatigue, what jerseys your riders are after, the layout of the race, where your competitors are, which of your riders is suited to what terrain. If you’re not familiar with racing strategies, the game will be difficult; fortunately, picking up these strategies is fairly intuitive.

Auto mode is a contentious inclusion. Allowing players to access Team Comm without pausing the game is user-friendly and helps maintain a sense of urgency and race atmosphere. Auto mode is also really useful during periods of little action; instead of manually cycling alongside the peloton—or main pack of cyclists—just hit Circle and coast along until you’re ready to make a breakaway. But it can also be exploited: my most effective trick was to fly towards each corner and tap Circle just as I passed the apex. The game autocorrects your trajectory without diminishing speed, allowing you to tackle tight downhill bends at an impossible speed. Despite having three game modes—Tour de France, Pro Team, and Versus—there is little variety to the gameplay. Tour de France puts you in the shoes of a real-life racing team and tasks you with meeting a series of objectives—generally winning a stage or jersey with a specific rider—over the course of the Tour. The other modes are exactly the same with a single twist: Pro Team allows you to create your own team (sort of) while Versus allows you to play couch co-op—though online multiplayer is strangely absent.

The Pro Team mode is a hollow imitation of the in-depth sim mode available in sibling-title Pro Cycling Manager 2014, the “PC version” of this game. Pro Cycling Manager allows you to negotiate rider contracts, get and treat injuries, research better equipment, and a host of other features. Pro Team mode allows you to “create” a team by picking one of four uniforms and then race the Tour ad nauseam in weird Groundhog Day style. Your cyclists never age. They never injure. Once you buy them, they’re yours. Don’t try to “sim” a race; the fast-forward function will never see your cyclists at the front. And then, at the finale of every single tour in every single season, the commentator will inform you that it is the “final sprint of the 2014 Tour de France!” I struggle to call Le Tour de France 2014 an “authentic experience”. The 21-stages are, to the best of my knowledge, faithfully recreated and the prominent teams are represented. Cycling through the gorgeous French countryside is a joy, and the actual race mechanics are easy to learn, but hard to master as they should be. But it all begins to fall apart when you catch a glimpse of six identical spectators in a row, or give three teammates instructions mid-race and the same voice responds for all three. Watching the same bland dude wearing different team colours stand up to accept the various trophies and jerseys at the post-Tour award ceremony is unfulfilling.

Ultimately, the game feels unfinished. The actual racing is crisp and cycling buffs will find a lot of depth and complexity to work with, despite the lack of online multiplayer. But the sheer lack of content is disappointing, and the shadow of a simulation mode hints at what could have been: an exciting, definitive cycling game. Le Tour de France 2014 is not that game. But it can be good fun and cycling fans might find it to their liking.