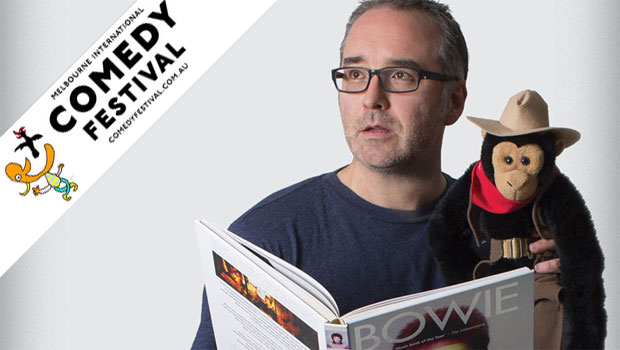 Welcome to Impulse Gamer Justin, so besides your live comedy, what else have you been up to?

I’ve moved to Sydney and I’m working behind the scenes on the Rove McManus and Sam Frost Breakfast Radio Show which includes writing sketches and coming up with ideas with Rove.

Nice! So is there any dirt on either Sam or Rove?

Okay then, what about some dirt on you?

What dirt can I give you? Where can we start? Maybe the lack of sleep at the Adelaide Fringe? <Laugh> I tell you what, doing breakfast radio, doing solo shows and then doing late shows and getting in at 2 in the morning and saying “well there’s my opportunity to let my hair down” … it doesn’t lead to the best choices so that’s about as exciting as it’s been for me lately <laugh>.

So how did you get involved in their new radio show Justin?

I’ve been friends with Rove for 20-years now where we first met at the Adelaide Fringe in 1996. We’ve been pals for a long time and he called me at the end of last year and said “do want to move up to Sydney and help me out with this radio show?” so I said yes. I’ve been living in Melbourne for 13-years now and it felt like a time for a new adventure so I just came up. You’ve been collecting Comedy Awards over the years from the various festivals around Australia, are there any whispers of new awards coming your way?

I don’t think so and I kind of feel that when it comes to awards, I think there is a point where you are popular and people say “what’s this shiny thing, we should give them an award” and then after you’ve been around for a while, people are like “oh… he’s back” <laugh>. Awards are good but I think that the award people are looking for different types of shows now.

Let’s talk about your new show, Hoot! So what is Hoot about?

Basically it’s about moving from Melbourne to Sydney and everything that entails. It’s a big shock to the system and I’ll tell you here and now… this is an expensive city! I knew it intellectually before but now I know it emotionally. It is an expensive town and with the amount of money you’re spending on rent in Sydney, you could buy a house in Melbourne. If I was living in Adelaide I could buy a townhouse and if I was living in Hobart… I could probably buy Hobart! <laugh>… it’s expensive!

So Hoot is all about the adventure of moving up to Sydney but also it goes into my childhood such as being raised by a single mum and the last third is about being a David Bowie fan. Five days before I opened at the Perth Fringe, David Bowie died so I looked at the show I prepared and thought, I don’t know if that represents where I’m at so I had to put this show together instead. It was a fly by the seat of your pants thing but to be honest, it’s been rewarding and a lot of fun so far.

Tell us about the Alvy Singer reference Justin, “A relationship, I think, is like a shark. You know? It has to constantly move forward or it dies. And I think what we got on our hands is a dead shark.”

It’s about relationships needing to keep moving forward or if it doesn’t, that’s where you have the dead shark. I talk about that in the show and how I’ve been in Melbourne for 13-years and started feeling like living there was coming to an end.

I felt like it was time to move on and that the relationship with Melbourne wasn’t progressing or moving forward and the Alvy Singer quote is referencing that. Even where you live can be like a relationship especially if you’re in an industry like mine, because you need to progress or you start becoming stagnant. It’s also why I gave the Sydney the role of the dice so to speak.

So coming back to Melbourne again, what are you most looking forward to at the Melbourne International Comedy Festival?

It’s going to be fun to be back in Melbourne again, even though I only got the offer from Rove and moved to Sydney in November last year. I’m sure a lot has changed in that time but I’m sure I’ll come to stuff that’s still 100% the same. I guess I’m looking forward to seeing how I’ve changed and what perspective that brings to me. The weird thing about going to the airport now is that I immediately go to the flight heading towards Melbourne <laugh>. I then have to go “wait a minute”, I think I might be supposed to be going in another direction!

How do you keep your comedy fresh?

There are a couple of layers to that answer. First of all, you have to remain engaged with your life in what’s happening around you and how your life is progressing. If you stop examining your life, that’s when ideas start to dry up and in the modern world, things are constantly changing.

You need to explore new ideas that you are being confronted with and then look at the ideas you don’t feel comfortable with which is where a lot of people fail in everyday life. They should be saying “why don’t I like that” instead of “I don’t like that”. This makes me feel as it’s all about living and examining your life which helps me write new material. As soon as you stop examining your life, how are you going to make your way forward? Your partner in crime is Adam Richards in The Shelf, how different is that to your solo show?

With The Shelf, I still do the stand-up stuff with myself but when it comes to the hosting of the show, it is more like a live podcast. Invariably it’s Adam and I but then there’s usually a Wil Anderson or a Celia Pacquola and like a podcast, it’s done in chunks and we just feed off each other.

The important thing is that when someone is talking, you need to listen. This sounds like a really simple thing to do but you’d be surprised at how many don’t <laugh>. There’s nothing worse than saying something and you can see that the other person is thinking about what they want to say next which is usually not matched up with what you were talking about… Wait a minute, weren’t we talking about oranges and you’ve gone to pears? <laugh>. So that’s the key, you have to be engaged with the person you’re performing with and really listen to what they have to say.

How many seasons of the The Shelf are you doing this year Justin?

It’s the night when I confess why I’ve left you behind Melbourne and cheated on you with Sydney <laugh>.