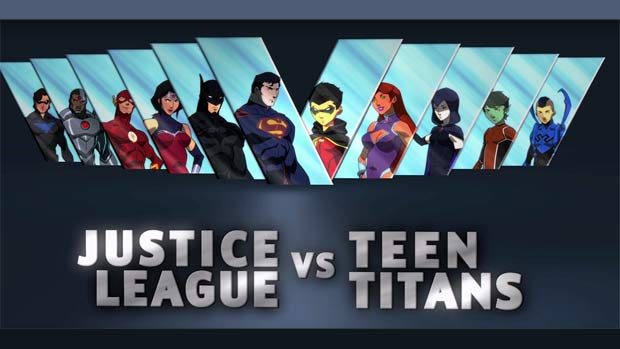 Summary: Justice League vs Teen Titans successfully pays homage to the DC Comics Universe and pits town great teams against each other!

Two of DC Comics greatest teams come together for the first time on Blu-ray and DVD in Justice League vs Teen Titans that is written by Bryan Q. Miller (Smallville) and directed by Sam Liu (Batman: Blood). So when the world’s premier defenders become possessed by the demonic magic of Trigon, it’s up to the Teen Titans to not only save the world but also liberate their older mentors, the Justice League in this comicbook action blockbuster. Set in the same ‘universe’ as Justice League War, the writer does an excellent job at introducing the Teen Titans as Robin (Damian Wayne, voiced by Stuart Allen) who is the son of Batman (Jason O’Mara) is forced to join the Teen Titans by Bruce Wayne in order to hone his skills. It is here where this holier than thou Robin meets the other Titans which include their leader Starfire (Kari Wahlgren), Beast Boy (Brandon Soo Hoo), Raven (Taissa Farmiga) and Blue Beetle (Jake T. Austin) who eventually become a strong team along the way. Starfire is also of a similar age of the original Robin who is now the adult Nightwing (Sean Maher) and helps keep the team focused.

The villain of the story is Trigon (Jon Bernthal), a powerful demon who is actually the father of Raven and this magical heroine explains her involvement with this demonic entity which is clarified quite well to the viewer. However the union between demon and human was to help Trigon take over Earth through the child which failed when Raven was taken to Azarath. On the other hand, Trigon is not one to give up and now that Raven is older, he has come searching for his wayward daughter and forcibly enlists the aid of the Justice League to help with original plan of becoming the overseer of Earth. So as the Titans learn to work together as a team, they take on the Justice League which results in some spectacular battles plus great one-liners as they attempt to free the possessed members of the league.

However things go awry and although the Justice League are returned to their former selves, Raven is forced to bring her father to Earth which results in an awesome team up between both teams. In relation to the other Justice League members, we also see Superman (Jerry O’Connell), Wonder Woman (Rosario Dawson), The Flash (Christopher Gorham) and Cyborg (Shemar Moore). It should also be noted that in relation to the comics, this series is based in the controversial New-52 continuity which saw the previous history of the comics wiped and basically rebooted. This means that many of the characters have modified or even new costumes and they are a bit rougher around the edges because they just started their superhero careers.

In this modified continuity, Cyborg was never a member of the Titans but rather a founding member of the Justice League but in this film, the writer cleverly makes him the first member of the league to be freed which does add him as a pseudo member of the Titans for part of the film. Furthermore, the characterisation of the Titans has parallels to various cartoon series and comics with Beast Boy used as the humour, while Robin is the more edgy hero but there’s some great dynamics between all the characters. Voice acting is also quite strong and really helps in bringing these characters to life.

Justice League vs Teen Titans is one of the better films in this new continuity which boasts a decent story and fun characterisation that really pays homage to the diverse history of both these teams and adds something unique and fun into the mix at the same time. It’s also well animated and presented on Blu-ray with some fun extras that dives into the colourful world of DC Comics. It’s just a shame that the live-action DC films can’t follow the more carefree nature of the animated ones.