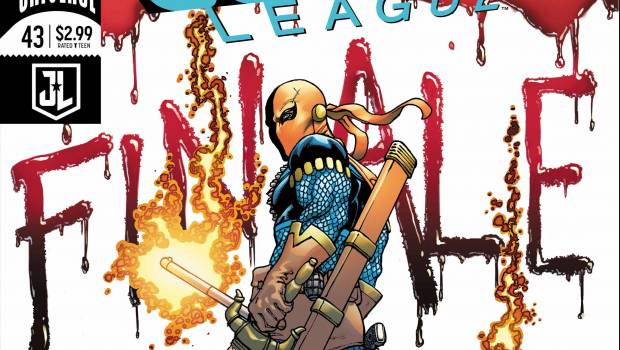 Summary: The conclusion to a story best left forgotten.

As we come to a close on the current the Justice League run, Christopher Priest gives us this anti-climatic ending to his mediocre run with the Justice League. Since this is the finale to the No Justice story arc, I will be making reference to the past issues so if you haven’t read this story are… save yourself some time and pass this one up.

So where our story currently sits: the Watchtower has been crashed to the earth by a crazed fan, the Heroes are in a no win situation in a third world country, and Wonder Woman is fighting for her life. Now I would like to start right there. Our great Amazon hero was brought down by a bullet fragment that bounced off of Superman’s chest. Now apparently Superman with his super speed and hearing didn’t even hear or see a young kid pick up a rifle and fire at him, nor did he do anything to stop or catch the bullets. So a tiny fragment has brought down Wonder Woman, a demi-God know for her speed herself and being able to deflect bullets. I know some people will argue that they were preoccupied having their heads up their own rears this story arc Justice, but I’m still having a hard time accepting that this could happen. However, it has happened so Wonder Woman is hanging on to dear life. Now the Flash asks Superman “Do we even know if a human doctor can save her?” I get that Wonder Woman is an Amazon, and she does have powers…But Priest wants to try to convince me that a human doctor that has probably dealt with hundreds of bullet shot victims could, oh I don’t know… REMOVE A BULLET AND STOP SOME BLEEDING?!  Nah, those PHD’s mean nothing right? Let’s take a gamble and take her to Raven. Sure okay, but I digress. This isn’t a review for the previous issue but I had hopes this issue would be able to redeem what has been a rather mediocre story so far. So while Raven must do what she can to save Wonder Woman, the rest of our heroes are left to clean up the mess that has been made in East Africa. Unbeknownst to the readers at the time, a plan has been hatched to possibly scare away the rebels and save the refugees that are currently in some dire straits.  As I was reading, I kept thinking to myself that there is NO WAY any of this could be actually happening! None whatsoever! It was so unbelievable I actually caught myself breezing through this issue in disbelief. Now all of this was later shown to be a ruse, that apparently worked, but I couldn’t fathom this actually work at all. The issue wraps everything up in a little bow and goes back to some little minor stories in this series that have lingered around way to long. Those being Superman’s lunch offer to Simon Baz, and the ridiculous kiss between Batman and Jessica Cruz. There is also a little moment between some of the characters about continuing on as the League because they are all in their feels with one another.  There is also a moment where Selina Kyle admits “the Real Housewives is on.” The idea that Selina is sitting around at Wayne Manor while watching the Real Housewives literally made me roll my eyes. It is like Priest just knows she’s a woman and just went to Google and looked up “Drama shows featuring women.”  This issue was so cringe worth and so out of character for the Justice League that hurt to read. My final thoughts for this issue is mostly that I’m glad it’s over.  I get that Christopher Priest wanted to bring the heroes “Down to earth” and mix in a little work place drama, but when I think of Justice League I always think of the over the top, action packed stories that show us what our heroes are really made of. I also understand what he wanted to do; I just do not feel like it was executed very well. One thing I will give this issue is that it had some amazing art! Pete Woods really gave these pages some color and life, sadly the only thing this issue had going for it. I’m giving this issue 2 out of 5 stars. If you haven’t read anything from this story arc I would say give it a hard pass and wait for the new Justice League series coming out soon.