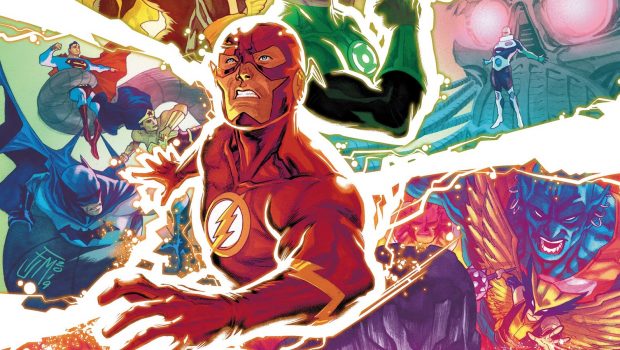 Summary: Justice League #31 is an intriguing read and the story has only begun... and what's going on with the "Society"?

It really is fascinating to watch Barry and John try to figure out why they have never heard of the Justice Society. Doomsday Clock’s delays have seriously screwed with people’s ability to place this Justice League story in continuity. With the Society’s return, I think this takes place after Doomsday Clock, which means Manhattan sets the Lantern closer to Alan again, which sets everything into motion, but due to shenanigans, the Society and League will still have not met until now in the new timeline.

But I digress. Apparently, the LOD has beat the League to the points in the past and the future and have tried to conquer Earth before they arrived. It’s really fun watching Kamandi converse with Superman. As far as I know, that’s never actually happened. With Diana, Clark, and Bruce trapped in the future, John and Wally stuck in the past, and Jon dead, the present is defended by Mera, Starman, Hawkgirl, and her son (who I can’t remember the name of). Oh and Jarro is there as well. The Monitor and Forger attempt to open a portal to Luthor. After introducing themselves for the 1st (!) time and realizing that times been screwed with, the Society and the League decide to team up.  In the future, the Trinity and Kamandi discover that Brainiac has locked up entire segments of hypertime in his ship. (You can clearly see a glimpse of New-52 Earth-2 Power Girl in one tube, so I’m wondering of this is Snyder’s plan for the Society and the League eventually getting their memories back.

The issue ends in the past where the heroes realize that it’s Pearl harbor day, the Trinity lands in front of the Justice Legion A, who is unfortunately controlled by Brainiac, and The Anti-Monitor has a new ally… AQUAMAN!

Snyder’s story is barely half done, so we have quite a long way to go before the heroes win. I’m more intrigued with what is going on with the Society, but I guess that’ll have to wait! BRITAIN’S GREATEST HEROES BAND TOGETHER ON THE UNION #1 VARIANT COVERS! →