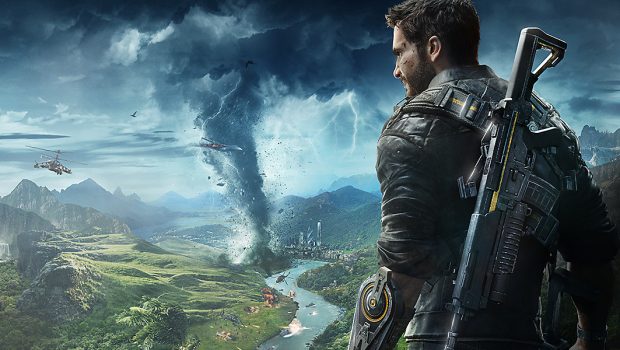 Summary: A new entry in the Just Cause saga spells hours of fun for gamers if not anything really new for fans of the series.

Rico Rodriguez is back in this next instalment of over the top action game Just Cause. Made famous for just how much fun destroying things and people were in the series, I was really looking forward to seeing just what would take place in this new game by Avalanche Games. Being a fan of the series heightened my expectations even more so, plus trailer footage looked soooo good.

Ominous start to a review isn’t it?

The question you are now asking is, well was it any good? The short answer is yes. However you might have noted that I didn’t pop an exclamation in behind the yes. So it’s a yes but not a resounding one. The reasons for that are pretty simple and the main one is that Avalanche has done so much with the series, especially Just Cause 3, that I didn’t really feel that anything new was brought to the table. In fact I would still contend that 3 is the better game. Having brought the review down a bit let me now as Drake would say, Elevate.

For those who haven’t played any of the games before, I can say to you, add 10% to my score because boy oh boy you are in for some fun. Rico is a non stop can of whup ass and you can pretty much blow up anything you see on the island of Solis where this game is located. The story behind this title revolves around the Dictator of Solis, who you actually won’t see much of having created a weather control system which Rico has to discover more about and take out. Add to that a rebellion that he gets involved with and you have at least 20 hours of destruction ahead of you. The idea behind the game is that even though it is free roaming, the story does have a habit of keeping you in check. You liberate areas as has been done before here and in games like FarCry or Assassins by completing tasks and destroying things but the game will make you complete quite specific tasks on top of that to progress and take advantage of the unlocks you can get if you do so.

Solis is an expansive island, home to pretty much all climates thanks to the weather control system they have in place so players will have fun in both snow and surf, and if the mood takes you, you can hit the slopes then the beach if you are inclined to wingsuit your way down a treacherous mountain. I really enjoyed that part of the game, and do take my hat off to Avalanche for making the wingsuit challenging to use but well worth the payoff if you do take the time. Plus for you trophy hounds it will pop one if you do get busy with it. The areas you explore are well designed and some of you will like just mixing it up in skirmishes with rebels and the army. Any weapon you see you can pick up and use, along with any vehicle that you can either drive, fly or ride on top of. I liked this part of the game. If I set a way point and then got onto a moving vehicle, they would quite obligingly seem to try to get me to that point. It was pretty cool and let me focus on gunfights whilst still getting where I needed to.

Explosions and destruction in the game are rewarding and you will blow up everything just to see what happens. Fireballs happen baby! Just to give you an idea, anything marked red just about will blow up and I do wish that they had let me do just a bit more. You will most likely have the most fun with the basic loadouts in the game; your parachute, wingsuit and a couple of guns. And of course your grapple.

The grapple hook is an awesome way to get around Solis and Avalanche has made sure you can use it to best effect. There are different modes to the hook most of which you won’t use until the game makes you but my favourite was firing a grapple into one item, then the other end into another more explosive item and letting the two get to know each other as they swung into contact. It’s good dumb fun.

Rico is a bullet sponge and recovers so quickly from damage you would almost have to be trying to not get through the game. The focus is just on having fun and blowing stuff up along the way; a ride I happily bought a ticket for. The environments beg for destruction and gamers will have a ball doing so. The threat of the weather control is a little underused and despite ominous loading screens, it is not as bad as you think. Rico can withstand hits from lightning and other elemental forces quite happily. It’s just not that big a part of the game. Other than some of the buildings in the villages, the game is a visual treat and the audio is immersive and on point. In terms of value, the sheer destructive nature of the game will see you playing it for quite some time.

I had a lot of fun with Just Cause 4 and I’m sure you will too. If you have played number 3 don’t expect a lot more but if you haven’t then you are going to love this. I recommend giving it a shot as a title that will see hours of play over the summer holidays.