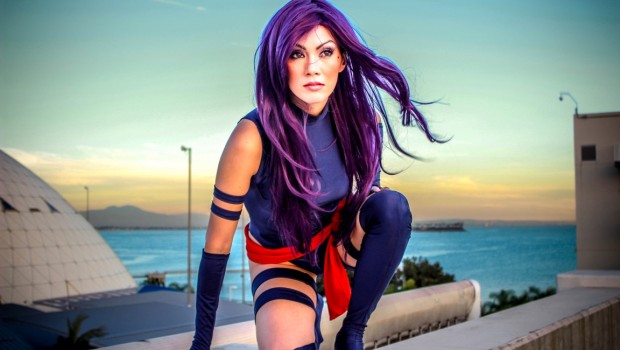 You describe yourself as a Cosplayer, Actor and Gamer, which one is your favourite and why?

Well since you are making me pick, probably Gamer because I don’t have to get all dressed up and I can sit a home and game all day. LOL! As much fun as it is to get all dressed up, it does take quite a bit of work to cosplay and act. With gaming, I can just sit in my pajamas all day and play. You’ve cosplayed Psylocke, an Elven Huntress and even Link, tell us how you became involved in Cosplay and why do you think you’re drawn to it?

I became involved in Cosplay when I was living in Japan, and saw all these people dressed up as crazy anime characters. I had my friends explain to me what they were doing. Once they did, I was pretty much hooked. I always loved Halloween when I was little, and dressing up to me was better than getting candy. Plus being an actor I love the chance of playing different roles. To me cosplay is just an extension of that, dressing up and playing a different character each time is why I’m drawn to it so much. What was the most challenging costume to create?

My most challenging cosplay to make to date was probably Yoko Littner. I though she would be easy because she doesn’t wear very much but it’s a very detail oriented costume. So I spent a lot of effort and money into getting the details of it down. I had to completely transform a pair of boots into her super cool giant zippered, flame colored red and white boots. Totally worth the effort though because it’s definitely one of the costumes I’m most proud of. If you had an unlimited budget, which character would you cosplay and why?

Probably Sylvanas Windrunner, but I would want proper metal armor. I use to spend hours playing WoW, and I just loved her costume. (Also I’m a big fan of elves) Then I would hire the best cosplay photographer and photoshop expert to create the coolest images. Cost doesn’t end once the costume is finished, if you want proper photos and effects that also should be factored into budget of a cosplay.

Big Trouble in Little China was a 1986 cult hit, what made you cosplay a character from this film?

It is one of my most favorite movies of all time!! It’s so quotable, and I wanted to do my favorite character which is Jack Burton. Kurt Russell is hilarious in the film. The whole time during the photoshoot I was just saying quotes from the movie. Which I believe answers the next question: What did you think of the film? Amazing, hilarious, brilliant, totally 80’s, one of Kurt Russell’s best… shall I go on? LOL. What about the downsides to Cosplay?

I feel the biggest downside to cosplay is all the judgement that is thrown around. Who’s cosplay is better than others. I really don’t like that. I shouldn’t matter if you are a beginner, or expert, body type, gender, or race. That person dressed up as a character they love. Point is they dressed up, just talk to them about it, people really appreciate that, tell them how nice it looks on them. Yes, we all have our favors but keep it to yourself, you don’t need to go to social media and knock people down or tell them who their favorite cosplayer is. We are all doing this because we love it. I think we should encourage, and not judge. You’ve just come back from the Long Beach Comic-Con, what where your highlights?

All the local cosplayers and their costumes. There were a lot of great costumes as well as people who were dressing up just to be funny. Plus there was a motorized R2-D2 that I kinda always freak out about. I want one of my own. Haha! I love all the local shop owners too. I can always find really cool one of a kind stuff there.

You’ve also starred in a variety of movies and television shows, what has been your highlight?

My highlight as been starring and being associate producer in the upcoming film, ‘Excess Baggage’ It was my first time being behind the scenes for a project like that, and it was a whole new experience. It was great to learn about what it takes to make a film and what goes on behind the camera. I actually had a really great time doing that and would be interested in doing it again if the right project came along.

Do you have any more films or series to shoot this year?

As for 2014, I have pretty much wrapped filming. I’m still working on post production for ‘Excess Baggage’ the film. But for acting, I don’t have anything coming up. Doesn’t mean that can’t change tomorrow, but no major projects scheduled as of now.

You’ve described yourself as a gamer, what is your all-time favourite game and why?

Probably the original Tomb Raider. It was the first game I played with a female as the lead character, and she was smart, tough, and sexy. She was, and still is, a bad ass character. Game play and story line was always fun to me. I’ve played all the Tomb Raiders, including the new one, which I loved! What are you most recently playing?

I just bought Borderlands: The Pre-Sequel and Destiny.

What game are you most looking forward too?

Well, it was Borderlands, but now I’m looking for forward to Far Cry 4 and the next Dead Island. It’s set in California, so that will be fun for me to play. Tell us what gaming consoles or PC mega-systems you own?

I own a Wii (original) PS3, and and Xbox 360, plus I still have my PS2 hooked up for some of my older games I like to play. My original Nintendo and Super Nintendo I think my brother managed to steal those and take them with him. I’ll get them back though…… Have you bad any bouts of controller rage this year?

No, I’m a pretty calm gamer, I do get frustrated from time to time, and might swear a bit (or a lot). The last game I got frustrated badly at was probably ‘Batman: Arkham City’ What’s the coolest yet geekiest thing that you own?

Hmm, I’m not sure. Could be my Tardis Throw Blanket? Or maybe my R2D2 carry on luggage? I have a few things I think are cool, it’s hard to pick just one. Lastly, what super power do you so desperately crave for?

Telekinesis. Who wouldn’t want to influence and manipulate things with your mind. It’s always been my favorite super power. With that said, we’ve heard that you’ve been trained in swordplay and stage combat fighting, what’s it like fighting with real weapons?

It’s so cool! Makes you feel like a real badass to handle a weapon, and do your own stunts. Also dangerous, safety is the most important thing. I have a small scar on my right knee from me being careless with my Elven Huntress weapon. The Elven Huntress weapon. I don’t even think there is a name for it. TJ Cencula had it created specifically for the character. Its a bladed staff that can shoot arrows and can also be taken apart into two short swords to fight duel handed. It’s the coolest weapon ever!