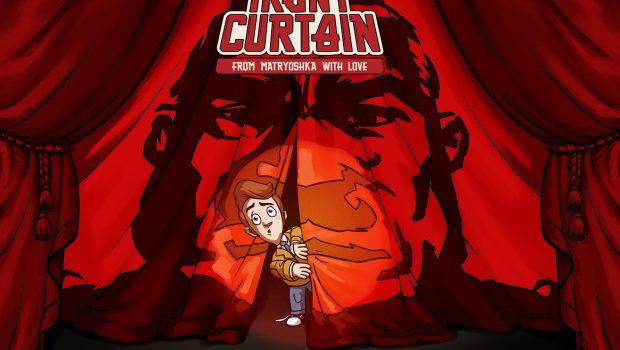 A young, naïve and somewhat confused writer named Evan, is living and working in the ‘states. He makes his affinity for Communism, and his love of the leader of Matryoshka known in a very public assembly. This is only the start of a series of whirlwind events and a very big learning curve for Evan or Ivan as his comrades will call him.

The game follows Evan as he gets unwittingly entangled into the world of Matryoshkin espionage, and through his adventure behind the Iron or dare we say the Irony Curtain, he slowly gets exposed to the truths about the country he admires so much and the leader he so reveres. Even in the cold face of the less desirable aspects of Communism, he naively and gleefully continues to admire the Leader and remains on mission to serve him.

Irony Curtain is a not-too-subtle parody of the Cold War USSR era countries and the perils of communism. It’s a point and click story-telling RPG and at each stage there is a joke upon a joke upon a joke. This game is hilarious. Brilliant script writing, brilliant artwork that compliments the story-telling and draws you in as it entices you to keep playing. You will need to solve problems and play fetch in order to progress, but unlike many games where you have to solve problems, the problems are part of the story telling. For example, many of the problems are due to the situation in Matryoshka and are fitting to the characteristics of the people and their circumstances. Each problem you are presented is more immersive to the satirical storytelling, rather than just giving you an arbitrary roadblock to overcome.

Of course, you will make many mistakes and trial and error trying to solve the problems you encounter, but when you do Evan has a hilarious quip or cheeky thing to say; and at times he breaks the 4th wall and makes slight comments about the fact he is a part of the game.

Right or left click doesn’t make any difference, you simply click on where you want to go and Evan will walk there, or close as possible to it. Interaction with everything and everyone allows you to look, and if appropriate, touch, action or pickup. You then have an inventory of items that you can bring up using the mouse wheel or by moving the cursor to the top of the screen. Items in the inventory can be looked at and sometimes manipulated or combined to make other objects.

This interaction follows suit with a lot of point and click games and therefor requires very little introduction or learning, even if you were new to the genre, you won’t find it difficult.

Thanks to the latest game update, there is no more saving or loading of games, you simply just click and play and you can’t do anything wrong.

A wonderful feature of the game is the in-built help system that is integrated into the storytelling. So much so that at times its part of the game entirely and you will have a conversation with a person on a telephone or radio, or perhaps even a wise fortune telling women. Each one of these information zones are indicated by a yellow light bulb. If you do engage the system you will find interesting dialog and helpful hints, and they are just that, hints, but (almost) never the entire answer. Don’t expect everything to be handed to you though. Information, just a phone call away. Bathroom off limits without authorisation!

Often, you will know what you have to do, but knowing you have to get from A to D doesn’t always explain steps B and C. So much so, that you can get a little frustrated, but rest assured the answer is always right there in front of you, eventually.

There are some annoying parts in the latter half of the game where for whatever reason, you just can’t seem to pick up or interact with items, even though you should be able to. This is likely a bug, and even though it seems you can’t do something, you just need to stand in exactly the right spot. Try double clicking as close to the item or location as possible then keep trying until it works. You will know for sure if this is the case because it will be obvious that you do need to interact and doing so will have no effect, no comment from Evan and in most cases no movement either.

One other problem encountered is when you release a friend from his prison cell. This is done at a control panel and you have the option to close the door again by clicking on a button. Doing so, causes a continued interaction with some missing NPC’s located outside the building and this interaction stops you placing a ladder against a statue. These are the sort of things that updates are likely to fix, but the game and indeed its story can be continued, it’s just a little annoying.

This game is a cartoon animated, highly detailed masterpiece. The scenery is quite detailed with superb animated effects, fantastic lighting and sets a very immersive tone. The voice acting especially is absolutely wonderful for each and every character, including the children. The accents seem to be realistic for a fictitious USSR country, there is a commonality shared amongst them even in the children.

The musical score is complimentary to the story telling and does what it is designed to do, sets the mood. It can also be turned down too, personal preference.

There are a series of fixed cinematic animations between each chapter and throughout the game, and these are superb and thrilling. In fact it is a great change of pace and provides a much needed break, especially if you were to be “binge-playing”; it’s also a kind of a reward for your progress and really compliments the story-telling.

This game has some course language and sexual references in the form of some innuendo; it is suitable for anyone 13 and up. If you are a fan of point-and-click RPG, hilarious storytelling, or you would like to try a point and click for the first time, then you really can’t go passed this game. It is brilliantly written, carefully designed and put together; and most of all, seriously brilliant satire.

Summary: A young, naïve writer named Evan, makes his affinity for Communism and the leader of Matryoshka known in a very public assembly. This is only the start of a series of whirlwind events and a very big learning curve for Evan or Ivan as his comrades call him.