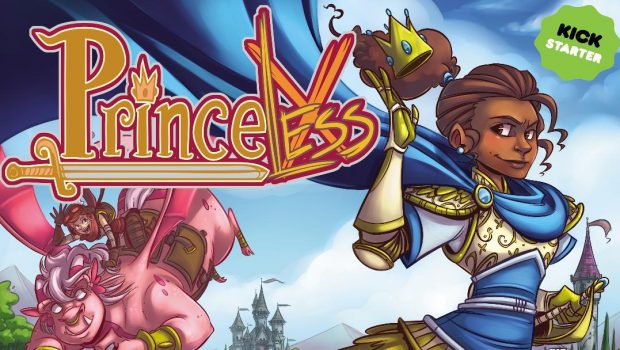 Interview with Jeremy Whitley, who is crowdfunding the award-winning PRINCELESS!

How did you get involved with Marvel?

Jeremy Whitley: It actually came pretty directly out of my creator owned work on Princeless. I approached editors at Marvel looking for work and provided them with copies of Princeless and examples of my work and the sort of thing I’d like to do at Marvel. I started off working on a few short stories for anthologies centered around events and poured my heart and soul into those stories. Then after I’d racked up a few of those, I got the opportunity to write a few bigger one-shot stories and then the chance to pitch my idea for Unstoppable Wasp.

What have you enjoyed the most about writing The Unstoppable Wasp with them?

I really love the freedom I’ve had to work within the Marvel framework. It’s a world that I’ve grown up with and that I absolutely adore, so getting the chance to not only play in that world but add to it has been a phenomenal opportunity. There are always little places where I get told “no” but I feel like if I can justify stories and characters, Marvel is open to telling the kind of stories I want to tell. I feel like with Unstoppable Wasp we’ve had an opportunity to tell stories that are meaningful to people in the same way my creator owned work has always been driven to tell stories I think are important.

How would you describe Nadia Van Dyne of the Unstoppable Wasp and what do you like the most about her?

I love that she’s optimistic. She has every reason in the world not to be: from her traumatic past, to her bipolar disorder, to finding out about her father’s death and checkered past. Nadia has every reason to expect the worst of the world, but she refuses to do so. She makes the choice to make a difference even when it’s hard. I admire that in real people and I admire it in her.

When writing beloved properties like Rainbow Brite and My Little Pony, how do you go about capturing the nostalgia of the original work while also making it your own?

Jeremy Whitley: I try to think about what really matters about the original property. What the message is, what makes the characters who they are, and what are the elements that really attracted young fans at the height of its popularity. Then rather than trying to appeal to the nostalgia of it all, I try to see those things through a modern lens. Sure, Rainbow Brite is a story about color and hope and friendship, but that doesn’t mean it can’t be an epic fantasy adventure. Honestly, that’s what’s made the “Friendship is Magic” reboot of My Little Pony so successful; it’s taking the message of the original and placing it in an appealing modern context that tells a story for this generation.

What can you tell us about the Princeless spin-off series, Princeless: Raven The Pirate Princess?

Jeremy Whitley: Raven: Pirate Princess follows Raven after she leaves the pages of Princeless Book 3. It’s full of adventure, revenge, and romance. If the idea of a pirate ship full of queer young female heroes on a quest for revenge is something that interests you, this will absolutely be right up your alley. Our mission was to tell a traditional fantasy adventure story, complete with the heroic romance aspect – just without the male characters, seeing as we’re on a boat full of women. We’re onto our third year of the series now and it’s a ton of fun. Why do you feel it’s important to explore LGBT+ themes in comic books like Princeless and Raven The Pirate Princess?

Jeremy Whitley: Because Princeless is about representation and telling stories where people of all races, sexualities, and identities can be included in the fun. We want kids reading this series to feel represented and to feel like they have heroes who look and feel like them. Fantasy stories aimed at kids often include heterosexual crushes and romances. Just because our heroine has crushes and romances on other girls rather than boys doesn’t mean we should leave that part of the story out.

In addition to Raven: The Pirate Princess, you worked on Sea of Thieves. What can you tell us about your love of pirates and what these series can offer for fans of pirate adventures?

Jeremy Whitley: I think pirates appeal to me for a lot of the same reasons that stories about knights and fantasy and post-apocalyptic wastelands do. When you’re on the high seas on a pirate ship, you’re already outside the law, so you have to make your own rules to survive. In a lot of interesting ways, historical pirates have been progressive as far as being accepting of different types of people and supporting those who are injured or disabled over the course of the work. When you put a group of characters on a boat in the middle of the ocean, miles from law and land, it’s like creating a tiny little world all its own. We titled an issue of Raven “On a pirate ship, every episode is a bottle episode,” and it’s true. Everybody carries everything from their lives with them and they have to live constantly within a few feet of other people. It heightens drama, especially when you consider that most of the time they’re on the run from the law as well.

For people who have never heard of Princeless before, what would be the one thing you would want to tell them about the series?

Jeremy Whitley: Princeless is the story that I wanted my daughter to have, but couldn’t find. It’s a story about a princess who isn’t willing to wait around to be saved, but decides to save herself and others like her. It’s a big, fun, adventure story – but one where the princess gets to be the hero and learn the heroic lessons.

Who is the perfect audience for Princeless?

Jeremy Whitley: Honestly? I hope everybody can get something from reading it, as I’ve always been the type of parent that likes to enjoy things with my kids. I think ideally it’s meant for middle grades and especially young female readers. But really it’s for anybody who’s tired of stories where the boys get to have all the fun while the girls sit around and watch.

The multiple award-winning Princeless is currently going into its ninth volume. After so much time, why was it decided to take the series to Kickstarter? And why specifically focus on volume three?

Jeremy Whitley: Well, we’ve been doing this for a while and we’ve learned a lot. One of those things that we’ve learned is kids are hard on physical comics. We’ve heard from parents, but much more specifically from librarians, that hardcovers are a thing they not only want, but need. Kids love to read books to death (my daughter has been through a few of her favorite graphic novels a dozen times) and softcovers and single issues wear down. Libraries and collections need hardcovers. So rather than do the bare minimum and put the same pages inside a cardboard cover, we wanted to produce nice, deluxe hardcovers. And while single issues can subsist on pre-orders from the comics market to produce something the size of a hardcover, it takes quite a bit more money up front, and that’s where the Kickstarter comes in. It will help us produce a solid hardcover that we can share with readers, libraries, and everyone else.

Volume three of Princeless is where we introduced Raven, who would become the star of her own spin-off series, Raven: Pirate Princess. Raven was a breakout star when this volume first came out and continues to be a huge part of the Princeless universe. I think the most important thing about her is that she’s a young gay female Asian character – a rarity in fiction at all, but especially for series aimed at younger readers. Raven is all the things that Adrienne is – determined, smart, heroic – but she’s also romantically interested in women. I think her presence makes this book one of the most important of the series and also one of the most fun to read. Who doesn’t like a queer pirate rogue?

Thank you for your time, Jeremy! Readers, you can back the PRINCELESS Kickstarter when you click on the link below!

Check out the Kickstarter here!