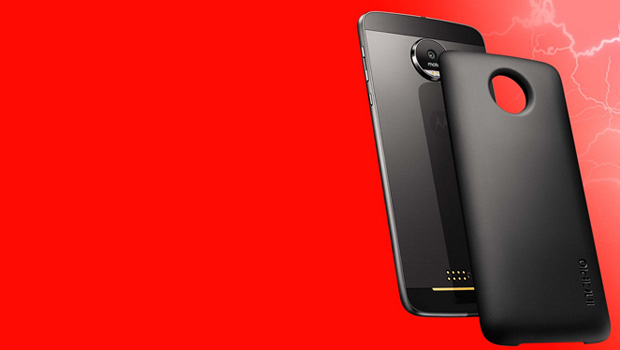 The Incipio OffGrid Power Pack is part of the “Moto Mods” from Motorola which have been designed to easily improve the functionality of the Moto Z by just clipping in an external device. You basically remove the back cover on your Moto Z which protects the connection from the elements, clip it in and you’re ready to continue playing with no further user input. In essence, the Incipio OffGrid Power Pack offers owners of the Moto Z an additional battery boost of 2220mAh which really amps the power needed to charge this phone and is great for people like travellers or even gamers who need that extra boost. In terms of design, the Incipio OffGrid Power Pack boasts a slim design that matches the looks of your Moto Z and only adds an additional 79g to the weight of your phone and gives up to 20 hours of additional battery life. It’s also quite a small piece of technology that measures at 152.7 x 73.5 x 6.2mm. When connected to your Moto Z, the phone will prompt the user how you want the Incipio OffGrid Power Pack to charge your phone. These include Default which tries to keep your Moto Z at 100% battery life but the charge runs out faster or Efficiency Mode which keeps your smartphone at 80% and makes the Moto Mod battery last longer. I did find that the second option was definitely more efficient. You’ll also notice that the battery icon has a new plus symbol on it which indicates your Moto Z is being charged. By accessing the Moto Mods app, it will also display the charge left in battery attachment. The Incipio OffGrid Power Pack is a very clever design that easily allows you to charge your Moto Z battery without any clunky accessories (e.g. portable power pack) and more importantly, it gives you up to 20 hours of additional battery life. So with a recommended retail price of around $119AUD (May 2017), it may be more expensive then a portable power pack but when it comes to installation, it’s pretty much non-existence and still allows you to use your smartphone with only a touch more weight and bulk.