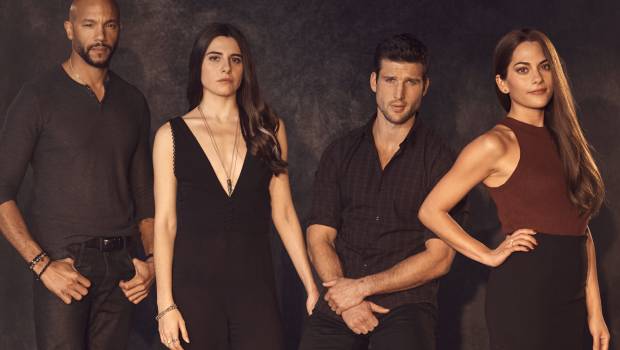 Summary: Imposters Season One on Blu-ray is a fun series with some very dark moments

Imposters is a new drama comedy on Blu-ray that is created by Adam Brooks and Paul Adelstein and is about the shady world of “con-artists” and the repercussions that this causes for both those conners and their targeted victims. Interestingly, Imposters has two parallel stories running throughout the season which does creating a compelling and at times amusing narrative. In the first episode, we are introduced to Ezra Bloom (Rob Heaps) who has just married the love of his life, however when he returns home one day, he discovers that his new “wife” Ava Bloom (Inbar Lavi) has swindled him out of all his worldly assets. To rub salt into the wound, all that she has left behind is a video message and some concerning information about his father.

With his heart-broken and his soulmate a farce, Ezra’s life continues into a downward spiral until one day, he meets another man who was also been played by his “wife” which sparks a catalyst in our down trodden man to find this woman with his new team of pseudo detectives who have also been wronged. The other story revolves around the beautiful femme-fatale Maddie who is played perfectly by Israeli actress Inbar Lavi and is definitely the standout actor in this series due to her chameleon like abilities and strong acting. Maddie does not work alone and works with two other con-artists who each play different roles in their scams, however all work for a mysterious man known as the “Doctor”.

Needless to say, this does cause an internal conflict for Maddie of emotions and questions of mortality as they can continue to swindle those innocents around them, particularly with the link to her “husband” Ezra. Given all the stock standard crime drama on television in this day and age, Imposters is quite a fresh series and a breath of fresh air with the main characters well cast, particularly Inbar Lavi. In the end, Imposters poses an interesting premise and although there’s plenty of predictable and clichéd moments in this formulaic series, it’s still a fun watch with interesting protagonists and some clever stories.  Given that, this series is definitely aimed at the older viewer, particularly with its mature content and while one story is more comedic (e.g. Ezra), the flip side is slightly darker.