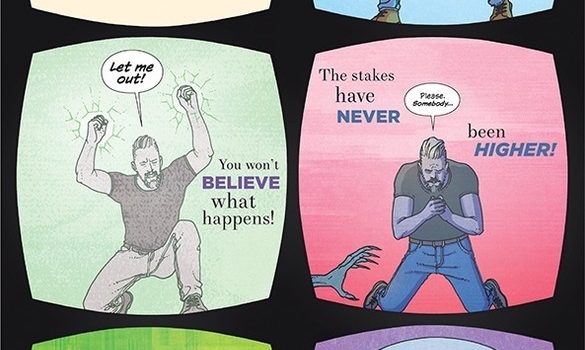 Summary: This is a book that hits its marks in all areas. The art and story are spine chilling and truly entertaining.

The third part of the Hopscotch Melange story like the previous issues has a completely different feel from the last.  If you’ve been a steady reader of this series you’re aware that this is part of the appeal.  If you’re new to the series, you’ve got the golden opportunity of finding a book that every issue is a great jumping on point.  Think a comic book version of Tales from the Darkside, but in lieu of the Cryptkeeper we have the sinister Ice Cream Man.

This book has a delightfully creepy feel to it.  This is part of what makes this horror themed book work so well.  Morazzo and O’Halloran craft the look of this book along the lines of reality television shows.  From full panels to television shaped confessional type scenes.  The artwork places certain scenes that slowly make the book have a creepier and scarier feel – starting with creepy and slowly moving to terrifying.  The way that certain characters appear to move, for example the mannequins in the first sequence, really set the stage for making this a truly unsettling feeling issue.

The bright colour schemes used throughout this issue make the content seem even more unsettling, as they effectively lull the reader into a false sense of security.  The bright and cheery programs that we let into our homes are twisted by Martin Morazzo’s art work to bring Prince’s story to gruesome life.  This book artistically take what a reader would commonly expect from a story and completely turns it on its head.

The issue begins with Will Parsons doing a reality TV confessional.  He talks about how long he’s been there, and how he’s confused that one minute he was watching a show with his family, and the next he was in the show.  One twist though is that there is nothing human about the rest of the cast.  They’re all mannequins.  After losing and escaping the mannequins that escort him off stage, Will is thrust into macabre show after macabre show.  Each gets worse for Will and as the issue progresses one wonders how long his psyche can hold out.

Several variations of popular reality shows are used, and Prince uses as many of the common tropes of reality shows to bring this horrific story to life.  A few fascinating twists occur throughout the issue, from an encounter with his uncle, whom we discover meets an untimely end, to the reveal that the issue isn’t just a bizarre hellscape of lethal reality shows, but that each of the smaller shows are contained with one overall show that stars all of Will’s family.

This is a truly fascinating issue.  The way that the art melds beautifully with the writing makes a finished product that is far greater than the sum of its parts.  The effective use of various Reality TV tropes adds to the authenticity of the story, and the way that Will is both written and drawn shows us a man that is going from being confused to frightened to absolutely paralyzed in fear.  It’s also nice to see how the art goes all in to present the horrible scenes in the various shows as bright and cheerful, with the other participants showing various levels of interest from confusion to excitement.  Reading this book could easily be adapted to a film, as it’s pacing would be perfect for this.

This is a book that hits its marks in all areas.  The art and story are spine chilling and truly entertaining! 5 out of 5 stars!