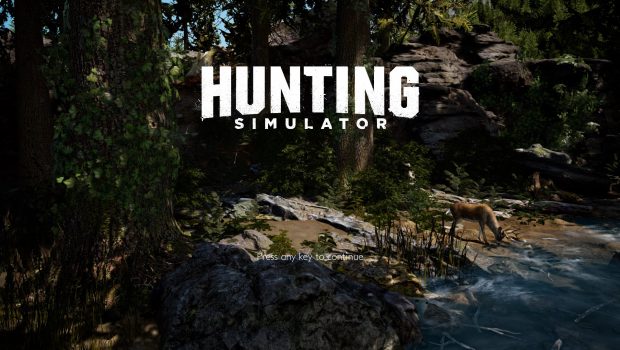 There are plenty of hunting games out there in the gaming world and there have been plenty of hunting games in the history of gaming (who can forget duck hunt for NES?). Typically the games aim for a degree of realism but splashed with more fun than accuracy, Hunting Simulator aims (see what I did there?) to be more realistic than it’s competitors… but it somewhat misses it’s mark.

Visually the game is quite striking, using the Unreal 4 Engine the forests and desert plains look suitably realistic. I did however find a familiar problem occurred. Much like a game I reviewed a few months ago (which I believe was also using the Unreal 4 Engine), I found that the global lighting had a bit of an issue… depending on where I was and where the sun was, the world ahead of me could seem like night had fallen… but tilting my head just a little bit down or in another direction would suddenly make it awash with light again. I can only assume that it’s a miscalculation in either the game engine or perhaps the drivers (I am using a Nvidia card) but it does make for some very frustrating hunting when you know realistically you should be able to see just fine… but if you are looking in slightly the wrong direction the world practically goes dark. There is also a slight issue with making a hunting game more realistic visually. As the game starts you are treated to an image of what appears to be a mother deer with it’s baby… instantly images of Bambi flash in your mind and you wonder what sort of monster you are to be playing a game in which you kill Bambi’s mother (or even Bambi for that matter… and Thumper and any thing else that stays still long enough in the woods). The actual in game creatures though are generally not as obviously “cute” or at least at the distance you tend to fire at them, you don’t tend to notice so much.

The audio I was a little unsure of too. When you finally get your prey in your sights and pull your trigger you hear a dull thud. It reminds me of the sound that seems to happen when CSI type people test fire a gun into a water tank. I’m not a gun person though, I’m not a fan of guns in general so I’ve not heard many in person (I think I’ve only heard a shotgun and air rifles… so not really extensive)… my thoughts were that they were generally quite full of bass and sometimes had a bit of a cracking sound to them… Hunting Simulator doesn’t really conform to my thoughts of what a gun sounds like… but as I said, that may just be my limited knowledge. Another element that puts the Simulator of the title in question is the actual tracking of the animals. As with many games the tracks to be found are typically droppings and foot prints… however, to find them all you generally have to do is either scan the horizon with your scope or binoculars and suddenly a white diamond hovers over the landscape to tell you where you need to look. Upon finding one of these diamonds up close and “examining” it, it will tell you what animal, which direction and how long ago it was there (which are all fine… and within reason are what a decent tracker could probably figure out)… but to really highlight this, the game then lays down some glowing orange tracks to send you on your way. It’s a difficult element to gauge though… do you simply scatter droppings throughout the landscape and put tracks in ground that would reasonably hold them and hope the player comes across them… or do you hold their hand a little and steer them in the right direction? Ballistics on the other hand do seem to have a decent degree of realism to them. If you are firing over a long range you do have to take into account the wind and gravity. Fortunately some of the gear that you can unlock will help you determine the wind direction and force and you can also get aids to tell you how far away the target is to help adjust for gravity. Other items you can unlock are a torch (or later, thankfully nightvision goggles), the standard animals callers, scent maskers, different scopes and similar related hunting tools (even a drone for the modern hunter who likes their tech). So the big question is… would I recommend it? Well yes and no. It is fun (I would hate to hunt in real life unless I was expressly trying to find food) but it really doesn’t play like a simulator in the full sense of the word and I suspect that is where this draws it’s most criticism. Having said that… with so many hunting games on the market it must be hard to find a name that stands out and that would draw the players in, but in our modern gaming world with expectations that can run so high… if you call your game a simulator and you don’t deliver something in which the player practically feels frostbite developing as they hunt in the chilly alps… they just won’t be happy. For me I would say if you enjoy hunting games it can be a bit of casual fun… but certainly not at full price… a deep discount is require or perhaps give it a…. miss (puts on sunglasses, adopts a smug look and walks off).