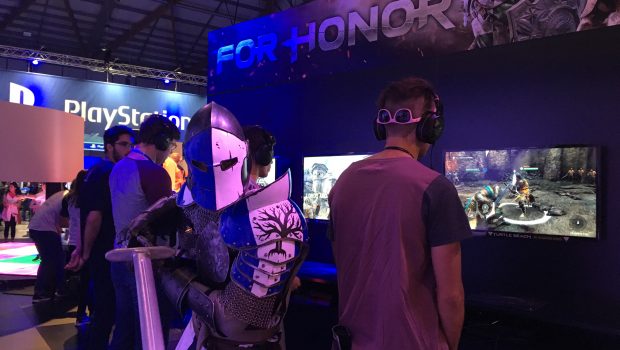 One of the sleeper hits for me was For Honor. I already knew of its existence, but hadn’t been paying much attention. Every time it drifted into my radar I noted the apparent slightly-more-serious-than-Chivalry vibe and carried on. But a single five-minute multiplayer match definitely changed my perspective and made For Honor worth noticing.

I was matched up with three strangers—one apologised before we even began, thinking we were certain to lose—and against another team of four. We had no choice in our characters for this demo: two played samurai and two played knights. The differences between these characters isn’t readily apparent from such limited playtime, but it is neat to have samurai fighting alongside knights. It creates this weird fantastical element that keeps it from feeling too gritty and serious. What immediately stuck out is that it borrows from MOBAs in the same way that Titanfall did; both teams have AI units that clash in the battlefield, creating the sense of epic conflict without having to pit legions of human players against each other.

While For Honor bills itself as hack and slash, it’s a little more intelligent than that. Having three stances (left, right, top) affects the way you both attack and defend, so switching between these is important. This is done with the right stick and is incredibly fluid; combat becomes, as it is often described, a little more dance-like where you must mirror your opponent in order to defend successfully, or become unpredictable to secure the offensive advantage. I love the way it transitions between that Hollywood-esque epic battlefield showdown and scrappy all-in brawl, too. At one point I was holding C point on my own and I defeated five successive enemies in single combat. After releasing that strategy was never going to work, the four opponents respawned and bum-rushed me. Being attacked from all sides is a terrifying proposition, because For Honor focuses the screen on the front (narrowing the field of view in-line with the kind of visibility you might expect while wearing a full-faced helmet), leaving your back and sides totally vulnerable.

For Honor is definitely a team game, though. My comrades rallied, we took back C point, and secured an overall victory—thanks largely to good coordination and savvy strategy. I can see this being utterly unenjoyable if played with uncommunicative, uncooperative, rude allies though; teamwork is the key to success, and being able to focus while engaging in one-on-one or one-on-two duels is made difficult by people yelling insults in your ear.

Sadly, there are other game modes that I wasn’t able to test—and I don’t think I fully mastered all of the basic controls—but For Honor was surprisingly captivating and I look forward to seeing more.

We ended up winning, by the way.