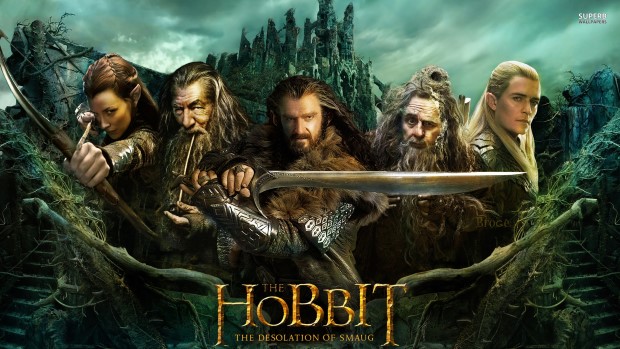 The Hobbit: The Desolation of Smaug Blu-ray Review

Returning to Middle-earth for the fifth time, The Hobbit: The Desolation of Smaug is the second entry in the Hobbit trilogy and marks a considerable improvement over An Unexpected Journey by having the freedom to dispel with establishing the characters and the main crux of the story and rather dive straight into giving filmgoers a meatier, more action packed experience. Many decried the first entry in the series as being a rather pedestrian affair, with much of the criticism being levelled at director Peter Jackson’s decision to turn the rather short source novel into an unnecessarily overlong trilogy that has no choice but to add multiple new plotlines to pad out the running time.

I personally didn’t mind An Unexpected Journey but even I can admit it’s obvious flaws and can certainly understand why Tolkien purists would take umbrage to the many deviations from the novel; in that regard, The Desolation of Smaug isn’t going to win over those who demand that the films remain as faithful to their literary source material as possible, but for those looking for an exhilarating and action-packed adventure The Desolation of Smaug will more than satisfy. The film follows the continuing journey of Bilbo Baggins (Martin Freeman) and the company of Dwarves he has decided to accompany on their quest to reclaim the Arkenstone and restore the fallen Dwarf kingdom of Erebor; pursued by a company of Orcs led by the vengeful  war chief Azog, Bilbo and the dwarves find themselves constantly on the run through often hostile environments.

Elsewhere, in Dol Goldur there is a great evil brewing as the resurrected Sauron gathers his powers and creates alliances with the Orc armies, leading Gandalf (Sir Ian Mckellan) to break away from the company and team up with Radagast the Brown (Sylvester McCoy) to investigate the veracity of the whispered rumours regarding the escape of the nine imprisoned ringwraiths and the identity of the conjurer who is responsible for the darkness that has began to befall Middle-earth. Bilbo kind of takes a backseat in his own story with this instalment, with a majority of the focus being on Thorin Oakenshield (Richard Armitage) and his all consuming desire to claim the mantle of King of the Mountain and restore the dwarf species to its former glories. Along the way this intrepid bunch of adventurers face off against giant spiders in the almost hallucinogenic Mirkwood Forest, elude capture by Elves (Including a return to the series  by Orlando Bloom as Legolas), encounter a creature known as a skin changer and a resourceful smuggler known as Bard who smuggles them into Lake-Town  and even finds one of the company potentially finding  forbidden love.

And of course, slumbering deep inside The Lonely Mountain, the great red dragon Smaug and the treasure he guards awaits those who dare to enter… And then there’s all consuming corruptive power of the ring in Bilbo’s possession and its increasing hold over its bearer. The Desolation of Smaug moves ahead at a much brisker pace than its predecessor, eschewing most of the character driven sequences that made up a majority of that film in favour of frenetic action sequences and perilous encounters; this film basically follows the same structure as set up by Jackson’s Lord of the Rings trilogy, with the first film focusing on setting up the story and dealing with exposition, the second ramping up the action considerably and the third going (Presumably) all out and throwing everything but the kitchen sink at the viewer.

The cast performs admirably all around, with the dwarfs showing more personality this time around, although many still remain little more than background characters; Kili, played by Being Human’s Aidan Turner, gets an increase in screen time in this instalment,  although the minor subplot of his love triangle with newcomer Tauriel (Evangeline Lilly) and Legolas does come off as a little superfluous. Stephen Fry is a joy for the short time he’s on screen, as is Luke Evans in the role of the roguish Bard, but by far the most commanding performance comes from Freeman’s Sherlock co-star Benedict Cumberbatch, who adds gravitas to a character who could have very easily come off as ridiculous.

The costuming and set design is up to par when compared to the lavish examples displayed in the LOTR trilogy, but the decision to use CGI for the Orcs and other visual effects occasionally let the film down, making one yearn for the more effective prosthetic work from the aforementioned trilogy. There are some missteps in terms of story structure and the climactic battle against Smaug is a bit jarring, but for the most part the film is an easy to digest and well executed fantasy film, which is all many fans can ask for. The Desolation of Smaug has a transfer that is practically reference quality, which isn’t a surprise considering the profile of the series. The 1080p visual presentation is rich in fine detail and suffers no contrast issues, with a crisp image and slid colour palette that serve to enhance the viewing experience. There’s no sign of aliasing or banding and the black levels aren’t hindered by too many incidences of crushing, although they are present on occasion. There are a few brief moments of lower quality shots due to the use of different cameras but these are fleeting and have no impact on what is an overall pleasing and technically proficient transfer that’s all the more superior for being shot in 24fps rather than the much maligned 48fps of An Unexpected Journey.

The transfer continues to excel in the audio department, with a DTS-HD Master Audio 7.1 surround track that robustly presents the stirring score whilst dialogue levels and the like are just as accomplished, playing cleanly and taking full advantage of the directionality of a surround sound system. A precise and meticulous achievement in audio mastering , this is one of the best examples I’ve had the pleasure of experiencing.

The Desolation of Smaug comes with a nice little selection of extras for fans to pore over, although one can’t help but get the feeling that the meatier supplemental features are being held back for the requisite extended edition that will release later in the year. Nonetheless, there’s no shortage of information to be gleaned from the featurettes that accompany the film, with a single featurette included on the first disc that gives a short overview of the locations in New Zealand and how the production utilised them to bring Middle-earth to life.

The second disc features an entertaining live broadcast of a Q&A with Peter Jackson, a documentary that follows the cast and crew during a single day of filming, four production diaries that focus on everything from scoring the film to the post-production process and pick up shots that were done after the initial shoot after it was decided to extend the films into a trilogy. There’s also a music video by Ed Sheeran and a selection of trailers for the film and its tie-in video games. Ever wanted to see a dwarf calisthenics video or an actor demonstrating how to pee whilst wearing a fat suit? Well, this is the disc you’ve been waiting for. Personally, I think the key to getting the most out of The Desolation of Smaug is to view it as a stand-alone piece, almost like it’s a reinterpretation of Tolkien’s work rather than a strict adaptation. Sure it has its flaws, and fundamental elements of the novel, particularly the encounter with Smaug, have been drastically altered, and not always for the better. Yet Jackson manages to pull off this more action oriented journey through Middle-earth with a steady hand, providing a thrilling and enjoyable experience that also manages to flesh out some of the more peripheral characters, albeit with the unfortunate side effect of occasionally diminishing Bilbo’s role in the film.

That being said, only the most ardent fan of the Hobbit films would claim that they’re in any way equal to the majestic achievements that were all three Lord of the Rings films. The brisk pace of the narrative, heavier focus on action and reliance on CGI is sure to rub some fans the wrong way but at the end of the day The Desolation of Smaug is an engrossing middle section of a series that has gone some way towards allaying my fears that the decision to turn the Hobbit films into a trilogy was a misguided one.