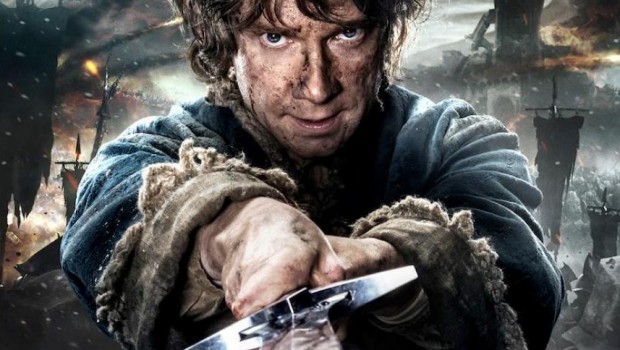 The Hobbit: Battle of the Five Armies Blu-ray review

Summary: New Zealand's best tourism marketing campaign comes to an epic conclusion with The Hobbit: Battle of the Five Armies! The 3D further emphasizes the sense of scale of Middle Earth.

It had been a while since I had seen the second Hobbit movie (this is the only one I didn’t manage to see in the cinema) and there is no recap or gentle lead in to the story here… you are thrust straight back to Lake-Town and the impending attack by Smaug. One thing I have to say from the start is that this film really feels like it needs a big screen… the bigger the better! Peter Jackson knows how to put a film together to give it a grand sense of scale and this is no exception. As the incidents at Lake-Town draw to a dramatic conclusion things get quiet for a moment as we see all the strands of the story start to come together for their final moment. The dwarves (well specifically Thorin) decide to stand and claim all that they have fought for in the Lonely Mountain, the Elves come to claim what they feel is rightly theirs as to the people of Lake-Town. Meanwhile Gandalf uncovers the darker happenings of Middle Earth and tries to warn all parties of the impending attack from Azog and more. The images are all lovely and crisp if a little dark… but they are only dark because of the nature of where the scenes take place. In true High Definition form you can make out the pores in the actors faces (much to some of their disgust no doubt). The only other thing that having such high quality visuals does is it shows up some of the CG a bit more than standard definition might have. To be fair a lot of the CG in Battle of the Five Armies does go by with minimal to no detection, mostly being obvious in the usual places (characters running and jumping and interacting with cg beasts mostly). But as with previous Jackson features… Weta Workshop do work wonders… seeing the facial expressions of Azog and some of the Trolls is quite fun and very impressive. The surround sound gets a bit of a workout too especially in a moment of reflection Thorin has in the halls of the Lonely Mountain, it reminded me of the original X-Men when Professor X gets into Logan’s head, voices suddenly pop out of no where, from the left, from the right, front and back… it really adds to the immersion in the film.

The extra features are not overly extensive, comprising of the third part in the series explaining/promoting, New Zealand as the choice for Middle Earth. Theatrical trailers and a legacy trailer and also a commentary track. The commentary track is quite interesting for those who want to know why Peter Jackson added certain “non original text” elements into the story… whilst it will no doubt do nothing to prevent some purists baying for blood… it does at least explain the thought process behind the decisions, the one that mostly comes to mind is the way in which he tackled the arrival of the Orc forces in front of the Lonely Mountains, as he says (paraphrasing here) “we’ve just had the Dwarfs show up undetected out of no where, you can’t just have another army show up undetected out of nowhere straight after…” his solution was to use creatures mentioned in Tolkien works and simply insert them into the scene in order to explain how the army could show up without being spotted. As I mentioned… it will no doubt not be a sufficient explanation/excuse for some people… but it does at least make more sense to those interested in cinematic story telling. If you have followed the cinematic telling of the Hobbit to this point, you would be foolish not to finish this chapter of Middle Earth’s rich mythology. If you haven’t seen any of the others then I would certainly recommend watching the other two films first or you might feel a bit lost, perhaps just get the trilogy box set and set aside about a day to watch through it (this installment was a little over two hours forty minutes.). Purists may still lament omissions or additions but if you like a bit of sword and sorcery this should certainly tickle your fancy.

The original copy of the film I received for review was the 2D version, I have now received the 3D and it’s quite interesting to rewatch the film and note the difference. The biggest benefit to watching in 3D is simply related to the scale of the film. Whilst a number of movies jumping on the 3D bandwagon are filled with shots within single rooms and the like, The Hobbit takes place over large cities and fields and lakes… the scale of which is even more appreciable when you can get a sense of the distance between places. The dwarven halls seem all the more empty when you can get a feel for the space between where Thorin stands and the next platform. Credit to Peter Jackson for filming this epic in 3D as it both avoids the hassle of converting the footage and it also gives a more natural feel to the 3D… some of the more subtle 3D effects are also some of the most appealing, the soft fall of snow as the people of Lake-Town try and defend the city, simply beautiful. If you have a 3D set up at home you would be foolish not to grab the 3D version of The Hobbit the battle of Five Armies, it’s a wonder to behold again and draws you even further into middle earth with that fourth wall being thinner than ever! The original review copy was also a little minimal on the extras front, the 3D copy (which is the full retail copy) has all those wonderful extras we’ve come to expect from a Peter Jackson film, taking us ever deeper into not just the Cinematic depiction of Middle Earth he has gifted us, but the people and places behind it that helped to bring it to life and to find it’s spot in our hearts.