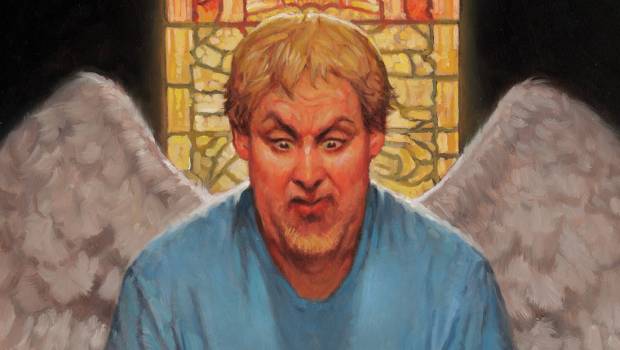 Summary: Heaven has never been so dank.

Heaven, an ethereal paradise where one can live out their blissful afterlife for eternity…or so we thought. What if Heaven was actually a shithole, filled with vending machines, complainers and crummy accommodation? This concept is explored in the hilarious dark satire, High Heaven, written by Tom Peyer, with art by Greg Scott.

The story follows lonely depressive and chronic whinger, David Weathers. He is a gifted moaner and complainer, undoubtedly able to annoy and cheese-off everyone he comes in contact with. It all comes to a climactic and dramatic head when one of his work colleges plays a cruel prank on him, resulting in David wandering into the street in a state of hopeless dismay, whereupon a piano falls directly on is head. A rather theatrical end for David. Not realising he is in fact dead and in Heaven, David continues to complain, slowly and steadily pissing everyone off around him, including St. Peter himself. After learning that he is dead, the full weight of this revelation comes crashing down on David as he quickly discovers that Heaven isn’t so much the perfect and immaculate paradise, but in fact more of a dirty old scummy shithole. He needs to find a way out…but how?

I have to say that Tom Peyer has crated something hilariously special with this story, and a bit of a legendary loser with David Weathers. The overall tone of this story is spot on, venturing forth to deliver a dark satirical narrative with a chronic complainer as the main protagonist. I’m an atheist, so the whole concept of Heaven is quite amusing to me, so to see someone reimagine this eternal paradise as a bit of a rundown nightmare made me quite literally laugh-out-loud in a maniacal way. A huge amount of my appreciation for this story begins and ends with David Weathers, the not-so gallant and dashing leading man. It is his inquisitive and complainy nature, with him questioning everything in a whingy sort of way, that I found to be quite relatable and funny. I loved seeing him moan his way through the pearly gates.  It would suck to learn that you’re dead and forced to stand in a queue, discover that you only have access to vending machine food, find out that you have to live out eternity in a dirty condo with a roomie and finally, the icing on the cake; that you no longer have genitals. Oh Lordy, how awful indeed! I’d probably complain too.

Like with AHOY Comics debut issue The Wrong Earth; High Heaven also comes with a delightful collection of goodies at the end of the main story. There is a comic short called Hashtag: Danger kill a dinosaur! also penned by Tom Peyer, with art by Chris Giarrusso and a prose story called Festive Funtimes at the New World’s Fair written by Grant Morrison with illustrations by Rick Geary. Once again, this extra content makes this issue feel more like a comic magazine rather than a single issue, giving the reader a diverse range of things to read and enjoy.

The art by Greg Scott is wonderfully detailed and expressive. I especially love Scott’s linework and inking, believing that it gives the story a very edgy and textured quality. I thought that the way Scott captured David’s death was perfect, being more abstract and symbolic in a dramatic and visually impactful way. I actually thought that this particular scene almost possessed a street art quality to it, which brings an interesting diversity to the story. I also love how average and boring Heaven looks, appearing sparse, empty and somewhat bleak. The colouring by Andy Troy is really effective in capturing the austere and drab quality of David’s life and afterlife. Cooler colours are used in a delicate and muted way, hinting at colours, almost like a stain. I also thought it was clever to see Heaven look so white and sterile.

Overall, I thought that this was a clever and entertaining story. David is an excellent protagonist who has dry and sharp banter that gave me a good ol’ laugh. The concept is fresh and original, and this combined with the lovely art makes for a highly enjoyable read. I’m keen to delve into #2 when it comes out, and recommend you grab a copy of #1 ASAP!