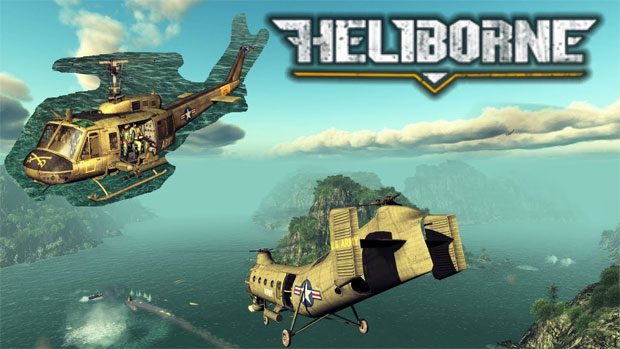 Summary: Heliborne is a great online-multiplayer experience for both helicopter enthusiasts and those of us that just want to fly around and shoot stuff.

With the shockingly astronomical success of World of Tanks a few years back, it should come as no surprise that other developers would soon follow suit with similarly designed titles in an effort to claim a piece of the auspicious multiplayer pie. Fast forward to now, and a quick look through Steam’s new releases will reveal a burgeoning subgenre of realistic, online, multiplayer-focused, vehicular-combat games dominating the charts. So if War Thunder is the king of plane combat, Cold Steel took battle ships and World of Tanks is the unstoppable Abrams of ‘tank on tank’ action, then Heliborne must be in the lead for the crown of helicopter combat. As hinted at above, Heliborne is an online-multiplayer, helicopter-combat game with a focus on realism and historical accuracy. If you’ve played any of the previously mentioned vehicular combat games, Heliborne’s design will feel very familiar. Broadly speaking, you earn tokens by playing online multiplayer matches in a variety of game modes in order to level up your pilot and unlock more choppers to fly. It’s a familiar cycle for this online-multiplayer subgenre, and one that you’ll find yourself stuck in simply because the actual gameplay is really quite fun. Piloting choppers in Heliborne feels great. All the complexities and technique that goes into flying a real helicopter has been distilled down to a control scheme that makes flying fun, simple and intuitive to learn, whilst also requiring some degree of skill to perform effectively. It’s not a simulation game, so if you’ve flown a helicopter in Battlefield or Grand Theft Auto, the basic flight controls will feel similar – just a little heavier, which is a symptom of Heliborne’s devotion to realism. The game also supports keyboard + mouse, gamepad and HOTAS setups if you’re looking for greater immersion. This focus on realism has also manifested in faithful recreations of actual helicopter designs with unique physics and historically accurate weapon loadouts. These designs are spread across a range of eras and it’s fascinating to feel the advance in helicopter technology over time. Thankfully, Heliborne’s multiplayer modes restrict the era of the vehicles to their respective historical periods, in order to ensure you’ll never come up against a modern Blackhawk in your Soviet version of something resembling Homer’s car. Speaking of multiplayer modes, one thing that separates Heliborne from games like War Thunder and World of Tanks is the unique way in which helicopters can be used on the battlefield. In the standard Capture game mode, teams earn points by completing tasks such as destroying enemies in an area, or more interestingly, by capturing objectives. Only helicopters that are able to transport troops are able to capture objectives, meaning teams will need to coordinate their vehicle line up to ensure one player is able to transport troops to capture bases, while the other players protect the troop carriers and clear defences. It’s a great dynamic that has the potential for interesting competitive play down the line. Of course the standard team-based dogfighting is also available if you’d prefer to just blow things up, which is always good fun. In terms of aesthetics, Heliborne is rather all over the place. The helicopters look great and are replicated with brilliant attention to detail. The map textures on the other hand can often look like something out of an original Xbox game. Most of the time you’re too focused on the objective at hand to notice, but it is disappointing. The game ran perfectly fine on my PC and lower-end machines should also be able to run the game with some settings tweaks. The sound design is also generally solid, with weapons sounding authentic and powerful, and cockpit alerts frequently chiming to warn of on-board fires. Heliborne is a great online-multiplayer experience for both helicopter enthusiasts and those of us that just want to fly around and shoot stuff. It won’t win any awards for its graphical prowess, but the controls work well and the different game modes are unique enough to separate Heliborne from the crowded online-multiplayer vehicular-combat subgenre. The progression feels balanced and the huge variety of helicopters available ensures you always have something new to try out. So grab your helmet, blast ‘Ride of the Valkyries’ over loudspeaker and take to the skies, pilot.