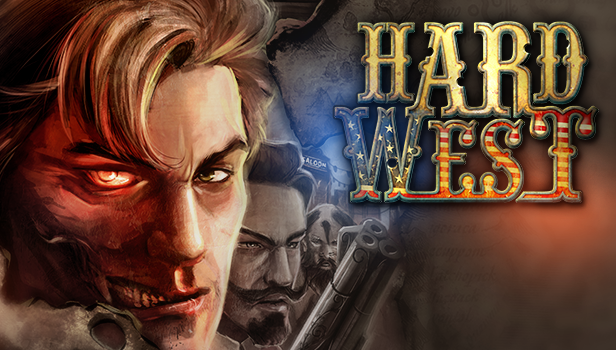 Summary: Dysentery is the least of your concerns.

I love the Western Genre… the notion of bringing order to a chaotic world, heroes and villains deciding their fates by way of a dual at noon and so on. Hard West starts out as “the Oregon Trail” and quickly descends into that deepest darkest recess of Western… the cowboy working for the devil and seeking vengeance!

If you do a quick look you will see many people comparing Hard West to UFO and that’s not a bad comparison… but it is also much more than that. You have the same general play dynamic, line of sight, cover (though you can now use some elements of scenery to enhance cover… see that table there… flip that over and take cover behind it). But Hard West throws some interesting little bonuses in the mix.

Throughout the game you will come across playing cards (wouldn’t be the wild west without a hint of poker or similar)… each card is a boost of some sort ranging from improved aim to healing abilities and so on. You can also get talismans and enhancements all of which can be selected to take into individual battles and they may well be the thing that turns the conflict in your favour. The other really interesting option shows up in the difficulty setting, you have the option to have permanent injuries. “Why would I want to do that… that would just make things too difficult” you might say… but there is a trade off… the injuries do cause you immediate disadvantage but over time they become strengths. Case in point, my character took a shot to the spine, it effected him obviously adversely when it first occurred but over time it caused his spine to stiffen which had the effect of improving his aim as he was more steady with his shots. You may at this point be thinking… ok but what about that whole devil thing you mentioned earlier… well he starts as simply the narrator, a shadowy figure who seems to be very interested in your story… as things progress though you learn he has a very personal interest in you and specifically what you can offer him… and this is where nightmare mode comes into play.

Pledging yourself to the devil you seek vengeance on those evil men around you and with Nightmare mode in play you can regenerate a certain amount of health (and luck which affects accuracy/chance to be hit) what this does is encourage you to be far more bloodthirsty (not surprising when you are working for the devil) and gives you a real sense of power. Despite the rich backdrop it provides there really aren’t as many western games out there as you would think there could be… there are of course the odd exceptions (Lucasarts Outlaws being an early favourite of mine). So it’s nice to visit the Ol’ West and do some gun slinging… I wouldn’t have thought to make it an isometric turn based game but it works. While I wait for my first person VR gunslinger inspired game to materialise (could someone work on that please)… I will pass some time taking cover behind that barn over there and trading shots with the Varmin’ snooping around the cow shed.