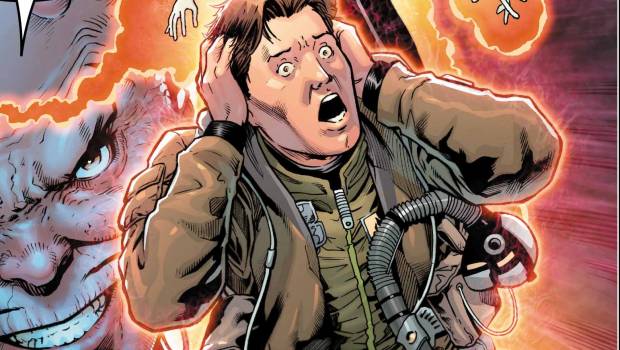 Robert Venditti will soon be leaving Hal Jordan and the Green Lantern Corps and with that he is giving us one amazing last ride with his Darkstar Rising story arc. I’ve been reviewing this arc since it started and it has been absolutely great. This issue is no different than the rest and just continues to build the momentum to what I hope is an epic ending for both the story and Venditti. Now let’s get on with this review that I will try to keep spoiler free. This story continues where it left off in the previous issue where Hector Hammond with his massive melon has taken over Hal Jordan’s mind. In this part of the story, Hal doesn’t really know who he is and is pretty much left to believe what Hammond tells him is the truth. However, as Hammond invades Hal’s mind, he can hear another voice in his head that starts conflict between Hal and Hammond. This pushes Hal to fight against the mental stranglehold, and while doing this learns of the reason he chose the planet they are currently on. This issue, as with the previous ones, has a lot going on in many different places, which brings us to the part of the story that I couldn’t wait to read. Guy Gardner in the previous issue had taken up the Darkstar Mantle and plans to dish out some Darkstar Justice on his father. However, an unlikely friend of Guy Gardner’s steps in to talk some sense into Guy. This friend is none other than Arkillo, whom Guy made friends with back when the Green and Yellow corps had an alliance. Thanks for messing up that greatness, Kyle! Anyways, Arkillo stands up to Guy to convince him this is not who he is and this isn’t truly what he wants. This leads to an amazing fight and honestly one of the best parts of the issue.  Arkillo and Guy’s friendship has honestly become one of my favorite things from Rebirth. For the 3rd story told in this issue, we turn to the useless Kyle Rayner on the planet of New Genesis. I mean honestly there isn’t even much to say here other than Kyle has been capture by the Highfather and is being help prisoner. Orion uses his position against the guards to plan their escape. That’s pretty much it… they escaped… This is probably the worst part of this story arc so far and I really hope it pays off in the end. I will not speak too much of the last part of the issue as it gives away too much and honestly, if you love this series, please go read it for yourself. This was a great issue and really builds things up to be an epic conclusion. I love what Venditti and his art team has done with this story as the two just work so well together. With a great story and amazing art this issue earns 4 stars. The end of this story arc is coming and it could end up being one of my favorites stories from Hal Jordan and the Green Lantern Corps.