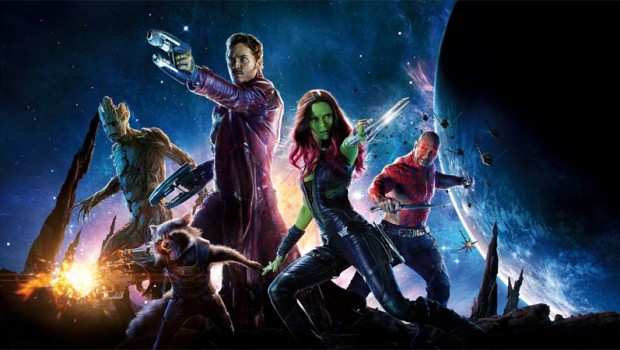 Guardians of the Galaxy Blu-ray Review

Summary: The Guardians Of The Galaxy on Blu-ray is a thoroughly entertaining space adventure with action, comedy and some very likeable characters!

I’m a sucker for blockbuster comic book movies, especially those from Marvel Studios who have a real knack for successfully bringing these comics to life. Sure, these movies are quite lapse when it comes to plot or realism but that’s what comics are about, the surreal fantasy about heroes who defy logic such as Iron Man, Thor or Captain Marvel. However unlike these relatively popular Marvel Superheroes, director James Gunn really took a chance by basing his movie on a group of unknown “superheroes” from the silver age of comics. Thankfully due to the great chemistry between the characters of Guardians of the Galaxy, this chance really paid off for both Gunn and Marvel Studios which resulted in this movie being the third most successful film to date with The Avengers and Iron Man 3 still holding the top two positions. That’s not a bad effort for C-grade characters!

Although Guardians of the Galaxy is a classic space adventure, Gunn succeeds by creating five very different yet likeable characters that include Peter Quill (Chris Pratt), Gamora (Zoe Saldana), Drax (Dave Bautista), Groot (Vin Diesel) and the very amusing Rocket (Bradley Cooper) that together make up the Guardians. Of course, the actors are the stars of these characters who really get into the headspace of these messed up ratbags that result in pure entertainment for the viewer. The story of Guardians of the Galaxy commences on Earth which sets the scene with a young Peter Quill as he watches his mother die. However to make matters worse, Quill is abducted by the Ravagers and eventually becomes an outlaw by the name of “Starlord”. Starlord is basically a petty thief and when he is given the job of stealing a powerful Orb, his life is soon thrown into turmoil when he comes across Ronan the Accuser (Lee Pace) that with this artefact, believes he can overthrow Thanos (Josh Brolin), one of the most powerful entities of the galaxy. As a result, Starlord forms a very uneasy alliance with Gamora, Drax, Groot and Rocket in an attempt to thwart Ronan from destroying the planet of Xandar and prevent the orb that is made up of one of the legendary Infinity Stones from destroying all organic life by its wielder.

Sure, the story sounds like your standard space adventure but the dialogue and music is the key to the successful format of the Guardians of the Galaxy. The film boasts a variety of classic songs such as Cherry Bomb, Hooked on a Feeling and I’m Not in Love which really adds to the retro feel of the story. However the link to the story is that Starlord was given this music by his mother that was dubbed the “Awesome Mix”. Then you have the witty banter between all the characters as each Guardian is basically in it for themselves. Starlord hopes to become rich, Gamora wants to steal the orb for her adopted father Thanos but realises she was double crossed, Drax wants revenge on Ronan for killing his family, Rocket is a genetically engineered raccoon that with his friend Groot, a tree-like organism are also in it for the money but along the way, they realise that together they are a force to be reckoned with as they attempt to save the galaxy from Ronan the Accuser. More importantly, the actors seem to be having the time of their lives which really shows from their on-screen performance and relationships, whether it’s the potential “romance” between Starlord and Gamora or best friends Rocket and Groot, the actors definitely create some very likeable characters. All in all, Guardians of the Galaxy is a well-made and entertaining popcorn film that boasts action, drama and a touch of romance which further explores the Marvel universe. To compliment this entertaining story, Guardians of the Galaxy looks amazing on Blu-ray, especially the flawless incorporation of computer visual effects with live action. Given that, this film is almost reference quality, especially when the amazing audio track is added to this Blu-ray release that creates a true blockbuster. Special Features are equally as entertaining that goes into the making of this story, interviews with the stars and a great audio commentary track by director James Gunn about the making of the film and the potential sequel. The gag reel is also quite amusing and really adds to the atmosphere of this entertaining release.

Guardians Of The Galaxy not only pays homage to the classic space adventures of the 80’s but it successfully links to the Marvel superhero universe to something bigger and creates an additional layer of complexity to this universe with some extraordinary and wonderful characters. Yes, the dialogue is clichéd and plots are over the top but it’s all about escapism and director James Gun definitely achieves in creating the ultimate space adventure.