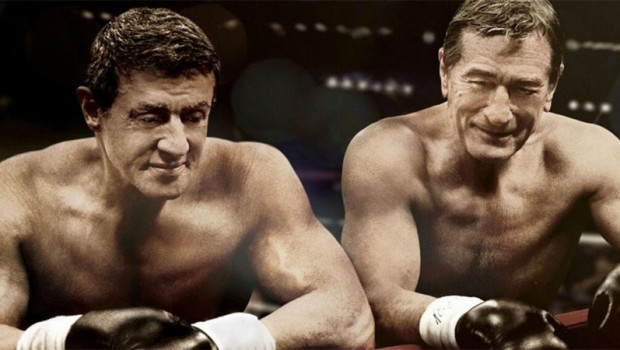 Summary: The Grudge Match is Stallone and De Niro at their best which successfully recreates the world of boxing and more!

Grudge Match starring Robert De Niro (Billy “The Kid” McDonnen) and Sylvester Stallone (Henry “Razor” Sharp) is truly the fight of the century and when these two geezers get together for the ultimate fight, the fireworks really explode. The story behind Grudge Match is that two retired boxing rivals are called together by promoter Dante Slate (Kevin Hart) in order to settle an age old question of which boxer is the best. Of course, the drama revolves around whether they should return to the ring and if they can put their differences behind them. This remains to be seen. The most amusing aspect of the Grudge match is seeing both De Niro and Stallone get back into the boxing ring and director Peter Segal definitely makes plenty of references to both Raging Bull and the Rocky series. Although there’s quite a bit of humour involved in the story, the dynamics, characterisation and dialogue between these two actors is brilliant with Kevin Hart being the mediator between the two. The story also plays a lot on their age, especially when they are referring to the physical activity of their previous sport, boxing. Of course a lot of the fights is done via movie magic and computer effects which although looks a little odd, it’s actually quite realistic.

It’s great that director Peter Segal also spends time exploring the rivalry between Razor and the Kid and even though they have some great differences between them, they do share similar drives and passion. Stallone is definitely the highlight of the Grudge Match who successfully portrays a sense vulnerability and flawed humanity. I also enjoyed the relationship between Stallone and his on screen wife Kim Basinger that even after all these years, there is still a sense of love. Then you have De Niro, has he ever made a bad movie? Not really and I loved his back story, especially about his son (Jon Bernthal) and his extended family. With all this drama and comedy going on, the movie finishes on a high, especially with the final grudge match that will definitely go down in movie history as one of the best boxing fights in a film. The video quality of Grudge Match is very impressive, especially the amazing CGI used to recreate some of the fights. Colours are vibrant, blacks are deep with no artefacting whatsoever. Audio booms thanks to its DTS-HD Master Audio track that once again boasts great levels, clear dialogue and a pumping soundtrack. The great aspect about the special features were the 2 alternative endings and how they created the realistic special effects for the film. I also loved the information about some of the real-world boxing legends.

The Grudge Match is a very well written film that I feel too many critics have been too harsh with. It’s a well written story with some amazing performances, especially from De Niro and Stallone. Grudge Match ticks all the right boxes to create a very compelling and enjoyable film that I thoroughly recommended!