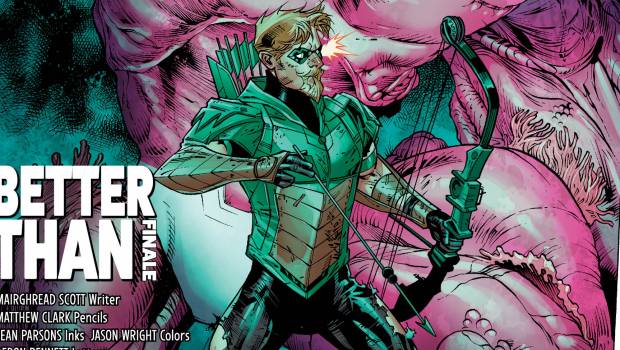 Summary: Green Arrow must chase Parasite down into the sewers to stop him.

When the Justice League asked Oliver Queen to watch over Joshua Allen better known as the Parasite, he thought it would nothing but a simple babysitting gig. Well as they typical do for Green Arrow, things get a little more complicated than that when the Parasite bust down into the sewers below Stryker’s Island. In this week’s issue DC Comics and Mairghread Scott give us the finale to the Better Than story arc which pushes our hero to his limits.

This issue starts out with Green Arrow chasing down Parasite through the sewers as he devises a plan to take him out in the best possible way. Of course as the rest of this arc, things turn south quick for Green Arrow as Parasite comes at him for a head on fight. The battle goes back and forth for some time but Green Arrow gets a small window where he has the upper hand. It is in this moment that Arrow senses a little piece of Joshua actual still in there, and Arrow tries to convince him the best solution is to come back with him. Parasite refuses, giving Arrow reasons on why he doesn’t want to go back and the hell that they put him through on Stryker’s Island. Arrow actually feels bad for Parasite and wants to bring him back around to help. There might have been a moment where Arrow is getting through to him but it is cut short and Parasite unleashes an attack that leaves Arrows hands and arms badly injured. It is after this when the ‘King of the Douche Bags’ aka The Warden comes in and really just gets in the way honestly. I mean of course the little weasel gets caught and Arrow has to save the day, you know which he does often.

Things in the story wrap up with Parasite back in custody with Arrow requesting to see how the inmate is being treated. The cell Parasite is in is not to Green Arrow’s pleasing but I have to agree with the little truth bombs the Warden hits him with next. The Warden tells Arrows that all these heroes going out and saving the day, they capture their enemies and bring them to jail, but what happens next? Most of these prisons are not properly equipped to deal with the villains the heroes bring in. What are the prisons to do with a limited budget? Yeah Arrow may say that we have to treat the prisoners like men or they become monsters but I don’t see the Queen Industries offering to help with the containment of these villains. As much as I didn’t like the Warden he had a point. This writing in this issue was great because it really made Oliver question some things and at the same time tackled some issues often left untouched. This story with this amazing art team made for some beautiful pages that was just fun to read. I’m giving this issue 4 stars and would suggest anyone interested in this issue to go back and read the previous ones to get the full story.