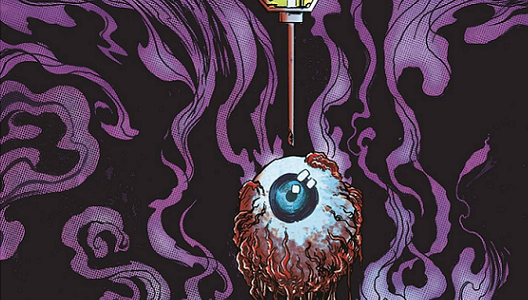 Summary: The fresher the kill, the bigger the high!

The horror continues for Anthony and Maribel, as they have quickly discovered that Burwood cemetery holds a dark and terrible secret. Both struggle to survive in a hell where the line between what is real and what is a hallucination is blurred. Will they get out alive? Things are looking pretty grim for Anthony and Maribel, who are both locked in a psychotropic hell. Maribel lies unconscious on the floor, in a pool of goop and sinews from a cadaver, whilst Anthony is still fleeing, terrified through the cemetery. Officer Elena Veloz arrives at the gates of the Burwood cemetery, after responding to Maribel’s distress call. Her presence wakes the sleeping Mrs. Malort, who was getting down to some creepy business with one of her sons…eww. Seeming distracted and speaking in riddles, Mrs. Malort eventually directs Elena to the grounds, where her trusted son, aptly names Shovel, escorts her. After finding a smashed mirror, Elena become highly suspicious, at which point Shovel tries to take her down. Elena is fast and doesn’t go down without a fight, but unfortunately for her, Shovel isn’t working alone.

Meanwhile, in the catacombs underneath the cemetery, we see a terrified, drug-induced Anthony running for his life. He is scared, confused and struggling with the disturbing hallucinations that are assaulting him. The path he takes leads him to a community of people, living underneath the cemetery in the catacombs. These people can best be described as “corpse junkies”, from their sick addiction of injecting themselves with human remains. With his mind addled and struggling to comprehend what is real and what is a hallucination, Anthony is quite literally experiencing a living hell that is both highly disturbing and quite unbelievable. Well, isn’t this a bloody nightmare! Just when you thought things couldn’t get any worse, we see the full effects that this horrible flesh-infused drug has on Anthony. Not only are the hallucinations distressing and awful, but the whole idea of where this drug comes from is just horrendous. This leads me into the whole concept M.L. Miller has spun about this highly-addictive drug made from human remains. I rather like how Miller weaves the lore surrounding this drug, revealing its long and dark past with some of history’s most influential people. It’s clever and gives the narrative a sense of history, as we see snippets of these addictions unfold over time.

Back to the main story, there is a lot that happens in this issue, with it all moving at a fast-pace. My heart goes out to Anthony and the harrowing ordeal he is experiencing in the catacombs. I’m quite intrigued by the community of mind-addled flesh junkies living in the catacombs. They appear to live in this place so that they may unearth the remains of the recently deceased, using the corpses flesh to make the vile decoction that they are addicted to…lovely! I’m curious to learn more about these guys and this strange corpse community they have formed.

I’m also fascinated by the Malort family, especially Mrs. Malort and her unhinged ramblings. She prattles on about her family, life and death, which to me suggests a dark past that she is trying to forget. I’m also curious about their motivations, and why they want to inject others with this drug? I can’t quite tell if this family takes the drug as well, or if they just like to harvest bodies, so that they may make the drug to administer to other people. The art by James Michael Whynot is wonderfully dark and gritty. His style perfectly matches the tone of the narrative, taking us on a nightmarish ride. I like the sense of movement that we see in this issue, finding that it captures a sense of action and fluidity that works really well on the page. The hallucinations remind me of something we might see from an episode of Creepshow, with grotesque monstrosities, depicted in a somewhat pulpy aesthetic. The neon-like colouring by Dee Cunniffe is vivid and eye-catching, and I really like how it heightens the overall psychedelic ambiance of the story. It all comes together to create a sinister visual narrative that is both menacing and frightening to look at.

Overall, I found this to be an exciting and fast-paced issue that explore some interesting plot developments. Things are looking pretty grim for Anthony, as he slips into a deep and troubling psychosis. I’m looking forward to the next issue, and stepping into this tale of horror once again.