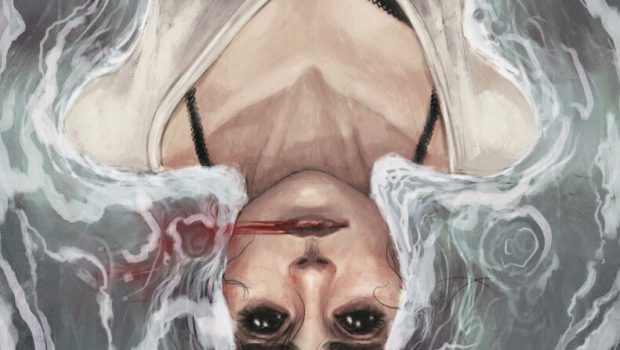 Summary: Overall, this new series has the potential to be the next sleeper hit from Image Comics...it will grab the reader's attention from the start.

The Hollywood scene, full of talented actors who are either spectacular with their acting abilities, and/or are a sight for sore eyes. But looks aren’t forever, as age takes a toll on many of the older actors of the yesteryears. The phrase, “out with the old, in with the new” is a great example of this, as we see less of the older actors, and we see new celebrities entering the Hollywood scene, even if their acting abilities are subpar. Come September, Image Comics will proudly present us with their latest title, “Glitterbomb,” written by Jim Zub, artwork by Djibril Morissette-Phan, colored by K. Michael Russell, and lettered by Marshall Dillon. This story is about Farrah Durante, and as the description of this series implies, she’s “a middle-aged actress hunting for her next gig in an industry where youth trumps experience. Her frustrations become an emotional lure for something horrifying out beyond the water…something ready to exact revenge on the shallow celebrity-obsessed culture that’s led her astray. GLITTERBOMB tears into the heart of Hollywood in a dramatic horror story about fame and failure. The entertainment industry feeds on our insecurities, desires, and fears. You can’t toy with those kinds of primal emotions without them biting back…” From this description alone, this has the making of a great, new series. From the first scene of this book, readers will have a sense of what this story will be about, and they’ll be intrigued with the starlet of this series, Farrah Durante. The following segment of the story is written so well, readers will feel the emotions that Farrah feels during her conversation with a younger female actor. In the closing act, readers will see Farrah’s son, Marty, and the babysitter, Kaydon, and the relationship they have. But that’s not all, the scene prior to Farrah arriving home has to be seen to fully understand what this series will be about. Overall, this new series has the potential to be the next sleeper hit from Image Comics. The story by Zub is intense, and it will grab the reader’s attention right from the start. We feel Farrah’s emotions, like we’re there by her side, it’s rare when the author has the ability to do this. The artwork is fitting for this story, Morissette-Phan sets the tone for every act within this book. The colors by Russell compliment this book from cover to cover, nicely done by the creative team. I rate Glitterbomb #1 a 4.9 out of 5 stars, this is a book that should be on everyone’s pull list, easily one of the highly recommended books for the week of its release. Glitterbomb #1 will be available on September 7, 2016.