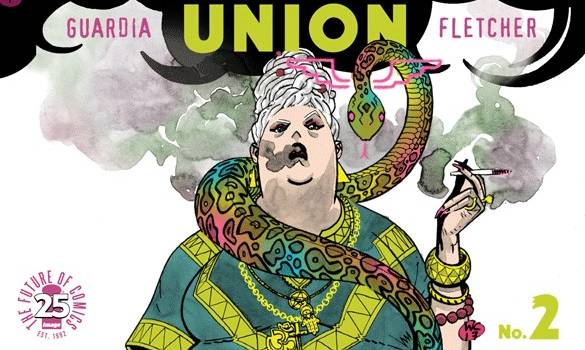 Cole is on his way to find the witch Morphea, hoping to unravel the mystery behind the unfolding apocalypse and how it is connected to his estranged daughter, Morgan.

We begin this issue, like the last one, on Earth a long time ago. We are witnessing some sort of origin story of dark celestial gods, who are brought into this plane of existence via some kind of unholy spawning tree. We then jump to the present day, where we see Cole and two of his fellow Gravediggers trudging their way through a swamp as they seek the witch, Morphea. They come across a lone caravan, and as they approach it they are taken by surprise by the woman herself, who is armed with a shotgun and is pointing it directly at them. She invites them inside, where Cole shows her the mysterious pendant that he found on a taking zombie. Morphea draws parallels with the designs on the pendant, to the drawings that Cole’s daughter, Morgan used to draw. From here she reveals information about the Black Temple, a dark cult that worships demonic forces and is funded by some of the richest people in the world. She warns that if Morgan is with the Black Temple, that the dark voices would have taken over her. We are then introduced to Morgan, a.k.a. the Prophet of the Black Temple. She has been chosen by the Temple to lead them into the apocalypse, and to rule alongside the dark lords. This is a revealing and slower-paced issue of The Gravediggers Union. We discover that the apocalypse is directly tied this powerful and mysterious cult, that has me incredibly intrigued. We also learn more about Cole’s family, mainly focusing on his daughter Morgan. She is an interesting and complex character, and her introduction has raised a lot of questions. How did she become involved with the Black Temple? Why has she been chosen? And, what powers does she possess that could awaken the dark gods? I do believe that she is somewhat of an unwilling prophet, or at least unsure with her new role. I’m curious to see more of Morgan and discover if she really is the dark prophet they claim her to be, and whether she’ll fulfill her role.

Artist, Toby Cypress weaves a dark and compelling visual narrative, that is both detailed and expressive. I enjoy how Cypress is able to capture the intense emotions through the engaging expressions we see on these characters. Cypress has a truly unique and distinct style of art that is full of interesting textural effects and character designs. I was particularly fond of the witch Morphea, finding her appearance to be reflective of a powerful, yet downtrodden witch. I liked seeing her sitting in her caravan, exuding a sense of dangerous power, surrounded by magic paraphernalia. I also find that there is an interesting simplicity to Cypress’ art, with nothing feeling overworked or exhausted on the page. Once again, the colouring makes this world have a magic and ethereal quality. It’s very unusual and I find it to be visually striking. Overall, I found this to be a revealing and informative issue. We discovered a lot about the impending apocalypse, the Black Temple and Morgan’s role in all of this. A lot of lore is being explored here, which is important when laying the foundations of the story. I’m curious to see how things will unfold and how the Gravediggers Union will try to stop the rise of the Black Temple.