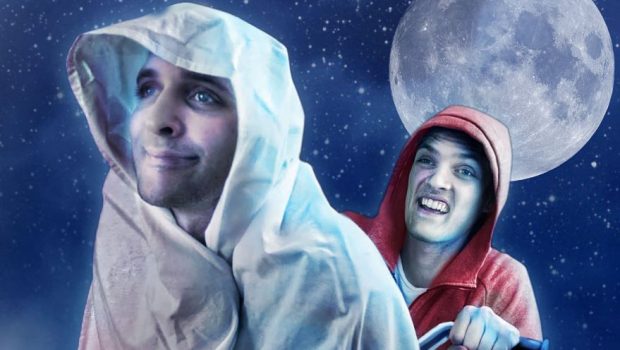 We catch-up with Eden and Josh from Game Boys on the eve of their Melbourne International Comedy Festival 2019 show!

Okay… let’s get this out of the way first, who is the better gamer Eden or Josh?

We actually prefer co-op games these days where it’s not about who’s ‘better’. This is mainly to avoid Josh bursting into tears as was often the case over competitive games of NBA Jam as kids.

Second, you guys have the coolest promo poster for the Melbourne International Comedy Festival, how do you guys come up with your comedy?

Each year when we sit down to write a new show we generally go out for a few drinks and just think out loud about different themes or settings. Our last four shows have been based around video games so this year was really great fun to take everything we’ve learnt from those shows and take it in a new direction. The best thing about writing with your brother is that the whole process is just sharing old stories and trying to make each other laugh.

It’s always easier to write about something you love. After looking at video games for the last few years we decided to mix it up and try and tackle our love of movies. We started with thinking about all the processes of making a movie and wrote down everything we could think of that could be funny. We wanted the show to be much more than just ‘famous movie scenes done on stage’ and I think we’ve really achieved that with our depth and variety of sketches in the show this year. I feel like I’ve know Eden my whole life. It was about 33 years ago when Eden was 2 and I had just popped out of the womb. We’ve been great friends and brothers ever since.

Tell us about your new show Game Boys Cinematic Universe?

As we mentioned above it’s our take on the cinema and movie industry and everything around it. We go from auditions and film studios right through to Hollywood blockbusters and red carpet faux pas. The performance itself is our own unique style of sketch and storytelling with an emphasis on technology. We always like to push the envelope with our tech and this year is no exception. As performers we interact with an enormous amount of video content. People often comment after seeing one of our shows that it feels like there’s a third performer on stage.

Game Boys Cinematic Universe is once again a very fun interactive show where everyone leaves with a smile on their face.

Obviously, you’re channeling your inner Marvel here, any DC inside you?

I think for the most part my DC comes out in my gaming. I adore the Arkham series of Batman games and don’t think there’s been too many other contenders that have given me that same feeling of being the superhero you’re playing as.

Any DC? Of course. Just look at The Dark Knight. It’s the greatest super hero film of all time. Most challenging aspect about creating the show?

Definitely getting to that stage where you forget if something is funny. When you work on a script for months and months between just two people you really lose perspective. You have to have faith that a joke you wrote 3 months ago is still funny even when you are no longer laughing at it.

Finally getting it out there and sharing it with people. When you work on something for months and spend hours and hours of your spare time and energy creating a thing it’s such a great feeling to be finally able to show other people. Chatting with people after the shows is one of our favourite things to do just to be able to share our process with people.

What can Melbourne attendees expect?

As with any Game Boys show there’s a big focus on tech and using it in surprising ways. Our shows are always fun and engaging as well as being filled with references and quotes. We like to layer most of our scenes with little jokes for those super fans.

Besides your show, what else are you looking forward to MICF 2019?

Very keen to check out Josh Ladgrove/Neal Portenza’s new show and also excited for Josh Glanc in Glance You For Having Me and Andy Matthews & Alasdair Tremblay-Birchall in Magma. And for the big internationals we’re looking forward to Daniel Kitson and James Acaster.

“Hold onto your butts!” with a picture of Samuel L. Jackson riding a T-Rex holding a lightsaber and fighting off Nazis.

Blasting off at 88mph to a galaxy far far away, hold onto your butts for an adventure 65 million years in the making.

Try your luck as a studio executive and greenlight the next Norbit!

Wet-your-pants in excitement at the live-action Stunt Show!

Come face to face with a terrifying T-Rex!

And keep your eyes peeled for any visiting Hollywood producers – you might just get discovered! Or harassed.

This is the 5th original Game Boys show to première at the Melbourne International Comedy Festival, a follow up to last year’s Best Comedy (Melbourne Fringe) nominated Wide World of Esports, and their 2017 MICF nomination for Best Independent Production (Golden Gibbo).