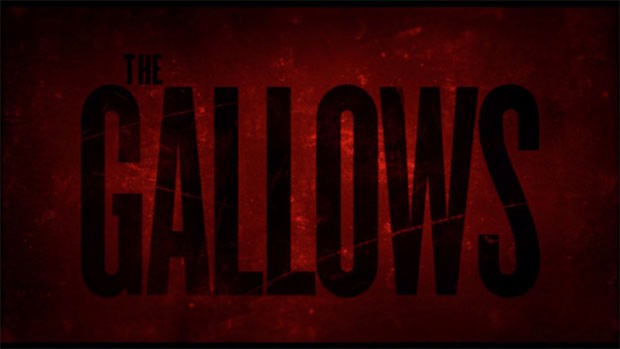 Summary: The Gallows is a formulaic effort which doesn't realise the promise of the premise.

The Gallows is a deeply disappointing movie. Another in a very long and now very tiresome line of found footage horror movies, The Gallows doesn’t do nearly enough justice to the underlying idea of the story, opting for tired stereotypes and manic pacing in place of a slow buildup of tension the material demands.

Written, produced and directed by Travis Cluff and Chris Lofing on the sort of budget that would bring shame to the word ‘micro’, The Gallows tells the tale of an ill-fated school production of the same name. Twenty years ago, a cast member in the original version of the play died on stage in an accident, setting in motion events that play out in this movie. In the modern day, Reese Houser (Reese Mishler – all the characters in the movie have the same first name as the actors playing them) is a jock whose crush on budding actress Pfeiffer (Pfeiffer Brown) leads him to a starring role in The Gallows. His friend Ryan (Ryan Shoos) follows his friend around, video recording his stilted acting efforts. Ryan’s girlfriend Cassidy(Cassidy Gifford) is roped into Ryan’s frankly stupid idea to save his friend the embarrassment of appearing in the play, by sneaking into the auditorium the night before opening night and destroying the set. However, the events of twenty years ago cast a lingering shadow, and as the quartet quickly discover, the restless dead will have their revenge.

The pity about this movie is that with more care, money and time, it could’ve been so much better. The Gallows is like the first draft of a horror story that sketches out the bare plot and characters but then the writer forgot to come back and flesh everything out. The characters are the worst sort of empty stereotypes – jock, bitch, nerd and awkward love interest. Events proceed at a cracking pace, but they lack any sort of context or meaning.

The use of found footage (surely so far past its use by date by now that it’s stinking up the fridge) is understandable given the very limited budget, but fatally cripples the movie – it’s as if the creators lacked enough belief in their concept to really push harder for a larger budget which would’ve allowed more tension and atmosphere.

No one sets out to make a bad movie. By and large, while fatally flawed in its realisation, The Gallows is reasonable film if you’ve some time up your sleeve. That said, it is very much a missed opportunity. While beggars can’t be choosers, one can easily imagine a version of The Gallows that truly terrifies and doesn’t rely on jump scares and annoying characters. Instead, we get 81 minutes of running, screaming, shaky camera action, and an overriding sense the found footage sub-genre has finally played out. I say that more in hope than expectation – if there’s a chance a movie made on less than $100,000 can return multiple millions, expect studio executives to be clamouring for more.

A note that while the blu ray image presents as crisp and clear, given the intentional limitations of the recording media, oftentimes the dialogue is hard to follow, so make use of those subtitles, folks! Astonishingly, and pleasingly, there’s a plethora of extras contained on this disc. The movie itself doesn’t make the disc an essential purchase, but the presence of all these extras means there’s more than enough here to hold the interest of the viewer.

Surviving the Noose: interview with the producers about how the movie’s inception, and its creation from humble beginnings all the way to being picked up by Warner Bros. It’s clear that Cluff and Lofing are very proud of their movie.

Charlie: Every School Has Spirit. Examines the iconography of the Hangman and the very effective opening scene to the movie. There’s also discussion about some of the spooky stuff that happened on set, unsurprising given the all night shooting schedule in an underground location.

Deleted scenes – a mix of alternate endings and deleted items. As always, it’s interesting to see what the directors regarded as being unessential to the final version, and there is some very unessential items here. There is one key character moment involving Reese which never made the final cut – a shame as it does add a great deal of depth to his character and while it may’ve unbalanced the final intent of the movie, it would’ve helped make his character more appealing. Also of interest are the alternate endings – the most effective is the two students who, inspired by the events of the movie, go for a looksee under the auditorium with a predictably, but entertainingly spooky ending.

Gag Reel – unsurprisingly, given the young age of the cast and crew, pranks and pratfalls aplenty occurred.

Trailers- three trailers are highlighted here. The concept trailer – a proof of concept to shop around to potential distributors. Original version – culled from the original version. And a Theatrical trailer that screened in the cinemas.