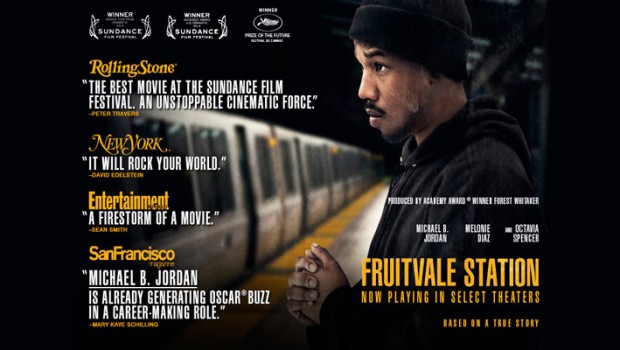 Summary: Fruitvale Station’s paramount concern is presenting a relatively accurate recreation of true events and that sensibility leads to a remarkably affecting viewing experience that’ll stay with you long after the credits roll.

All too often we’re exposed to a constant barrage of news stories to the point where it is easy to become desensitised and forget the human face that lies behind each news story. Recently we had the shooting of Trayvon Martin by George Zimmerman, an act that brought to the fore the negative ramifications of racial profiling and served to illustrate how one misguided decision made in the heat of the moment can end in tragedy.

Occurring almost parallel to the Zimmerman case was the wide release of a little independent film titled Fruitvale Station that thematically matched the sentiment of the wider public as it portrayed a similar, if not even more heinous act: The Police shooting of 22 year old African American man Oscar Grant whilst he was being detained at the titular station, face down and partially cuffed. It takes a film such as Fruitvale Station to remind us of that human element to the sensationalist news stories that clog the media, showing us the partially fictionalised depiction of Oscar’s final day.

Opening with cell phone footage showing the actual events leading up until right before the shooting, first time director Ryan Coogler’s film introduces us to Oscar Grant (Superbly portrayed by Chronicle’s Michael B. Jordan), a young man with a slightly shady past who’s attempting to get his life back on track. Fruitvale Station presents Grant as a flawed by sympathetic character, with one of the opening scenes showing him engaged in an argument with his partner regarding his infidelity and discussing drug dealing immediately being juxtaposed with one showing his loving interactions with his daughter and a phone conversation with his mother (Octavia Spencer). The film’s structure basically follows Grant as he goes about his daily business, experiencing moments of levity, mortality, existential struggles and a myriad of friends and foes.

Despite his sordid past, with the New Year looming Grant decides that now is as good a time as ever to try to initiate some change in his life, attempting to reclaim his position at a local store that, when it doesn’t work out in his favour, deftly shows the duality of his character as he becomes aggressively hostile towards his boss; Grant is far from a saint, but he is motivated by an honourable desire to legitimately provide for his young family. After a lengthy period of exploring the character and his lifestyle, the film gets around to that fateful New Years Day of 2009 where, due to an altercation on the BART train, Oscar and his friends find themselves being held by police at Fruitvale Station in an acrimonious situation that would eventually lead to Oscar’s death as he lay face down on the train platform in front of dozens of terrified revellers, replete with their cell phones at the ready.

The film doesn’t detail the aftermath of Grant’s death, where simmering racial tensions overflowed and lead to protests, riots and cries for reform as a stunned nation looked upon the horrific tragedy, conveniently caught on camera and broadcast by every major media outlet at the time, which is probably a good thing as it retains the emotional core of the story by simply beginning and ending with Oscar Grant’s last day. It was the immediacy of actually being able to witness such a transgression that really made people sit up and take notice; the unprecedented use of force, ostensibly due solely to the colour of the participants, and the racial epithets that were being used by officers before the incident resulted in residents vilifying the police department for their abuse of power.

Some may level accusations of the film presenting an idealised version of Grant and in certain respects one would have to concede – There are moments where it can feel slightly like the scenes in question exist only to emotionally manipulate rather than further the story or present an accurate portrayal, most notably a scene where Grant pours a bag of Marijuana into the ocean and another where he nurses a Pit Bull that has been hit by a car. Coogler has, to his credit, openly admitted that these scenes were embellished and were added to add more symbolism to the plot, such as the death of the Pit Bull representing the callous and uncaring way in which society views many young, black males, stereotyped as being volatile and dangerous. At the end of the day, Oscar Grant wasn’t a saint, nor was he a demon… Like most of us, he was just a regular guy, flaws and all.

There’s also an ominous foreshadowing of the impending tragedy that feels a little contrived, with the portentous signs of the night not ending well coming off as a little heavy handed in places, but aside from that minor complaint, even when stripped of political and racial context,  Fruitvale Station still succeeds, proving to be a solid, emotionally harrowing and affecting exercise in highlighting just how easily things can go awry. Fruitvale Station’s picture quality is quite a bit grittier than what is usually seen in the crisp, digitally cleaned up releases that have become the norm; having been shot in 16mm, there’s an abundance of grain, which actually plays in the films favour and serves to accentuate the stark and austere themes of the film. The finer points like detail and colour consistency are, as to be expected, not as evident as they would be on a bigger budget release but they’re more than serviceable here; there is a small amount of crushing in darker scenes, plus some noticeable scratches and marks on the film print itself, but for the most part Fruitvale Station’s transfer is quite solid and the aged aesthetic is definitely a positive in this case.

The soundtrack is presented via a 5.1 DTS-HD Master Audio mix that is, again, serviceable but nothing all that mind blowing. The main area in which I noticed the audio fell short was in regards to directionality; although the dynamic mix is adequate, the audio comes from all speakers at once rather than being relegated to different speakers, giving the overall soundtrack a flat quality that lacks direction. The dialogue and incidental environmental noises are captured quite well and delivered cleanly for the most part, and sound levels are mastered quite proficiently.

Fruitvale Station comes with two featurettes, one focusing on the production of the film and another a Q and A by the cast and crew filmed with a couple of stationary cameras. The Q and A is interesting enough but the unmoving cameras can grate, especially as it runs at nearly half an hour; regardless the feature is informative and offers insight into the production process and Coogler’s intentions. The second featurette was a bit of a letdown in the respect that one hoped it would shed more light on the life of the real Oscar Grant, but instead briefly touches upon his life, the parallels with the Trayvon Martin case and racial discrimination before settling into more comfortable promotional concerns. Producer Forrest Whitaker appears prominently in both supplemental featurettes, offering his perspective and hopes regarding the film’s reception. Shining a spotlight on a story which many may not be aware of, Ryan Coogler’s film is a solid debut that’s bolstered by a strong central performance by Michael B. Jordan, who honestly has never been better. The characters are easy to empathise with despite their shortcomings and the story is universal enough to transcend racial overtones and make Fruitvale Station relatable to a wide audience.

The film is authentic in its execution and emotionally powerful, although this sensation can be lessened by some pretty blatant narrative trickery and manipulative scenes. The film doesn’t attempt to add a new perspective on the societal issues of prejudice that underlie the story, nor does it try to awkwardly shoehorn in a preachy message; admirably Fruitvale Station’s paramount concern is presenting a relatively accurate recreation of events and that sensibility leads to a remarkably affecting viewing experience that’ll stay with you long after the credits roll.