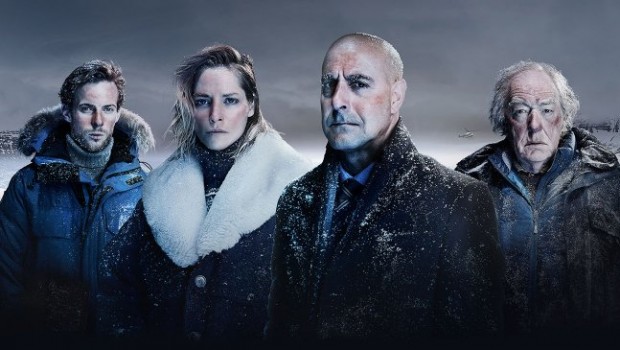 Summary: Fortitude is addictive television that will keep you up late into the night

A thirteen part series set in the remote outpost of Fortitude, located on Svarlbard in the Arctic, Fortitude is the television hit of 2015 you’ve likely never heard about.

Which is a problem best remedied by purchasing this release.  Set in the frozen reaches of the Arctic, Fortitude is a compelling drama that touches on a number of different dramas – police procedural, mystery and horror – all playing them to masterly effect.

The discovery by two children of the frozen remains of…something, touches off a sequence of events that will upend the cozy atmosphere of Fortitude.  That discovery leads to the murder of one of the leading residents of Fortitude, which leads to the arrival of DCI Morton (Stanley Tucci) from the London Met.  However, there is more to his arrival that the investigation of this murder. The beauty of Fortitude is that like its progenitor, Twin Peaks, the town and its people have a history that exists prior to the opening titles.  As the series unwinds, so too does the secret history of each of the main actors in the series.  A mixed cast of British, Danish and American acting talent brings a great deal of life and drama to the proceedings.

An additional aspect of the series is the forbidding landscape, beautifully shot at ground level and in the air.  Mountains and ice, glaciers and tumbling cloud formations, as well as a startling blue sky when those clouds clear, make the human tragedy in Fortitude seem petty and remote.  Against the grand, impersonal sweep of nature, humanity is fragile and small, the machinations of those at the heart of the mystery somehow pathetic against the grand sweep of nature.

That said, it is the performances that really mark Fortitude out from similar productions.  Stanley Tucci is marvellous as the brilliant policeman brought to Fortitude to investigate an even earlier death.  Around him swirl the permanent residents of Fortitude, all of whom have something to hide.  Foremost of them are Michael Gambon as dying photographer Henry Tyson, and Richard Dormer as Sheriff Dan Anderssen, the chief of the Fortitude police force.  These three men are compelling to watch, particularly Gambon, whose depiction of a man railing against the dying of the light, all the while wrestling with a terrible secret, is stunning and compelling in equal measure.

The other aspect of the production that shines is the script.  Creator and co-writer Simon Donald marshals a writing team that blends different genre tropes to marvellous effect.  What starts as a murder investigation quickly blossoms into full on horror as the effects of the unearthed…something begins to take a debilitating effect on all who come into contact with it.  While good actors can sometimes overcome bad scripts, in the case of Fortitude, a great set of scripts bring out the very best in the actors. To go into detail about what happens during the course of the series would be to spoil all the nasty surprises and narrative gymnastics.  What can be said is that along with the stunning visuals, haunting imagery, and great performances, Fortitude is merciless in its examination of the people living in and around the settlement.  Life amidst the snow and ice is hard – everyone with brains carries a rifle around to protect from polar bear attack, for instance.  The mine the town has based its fortunes on has begun to peter out, and the Governor, (able played by The Killing alum Sofie Grabol) has a desperate plan in place jeopardised by the finding of that terrible…something.  Relationships seem constantly on the verge of fraying and collapsing amidst the dark and cold.  Villagers dance madly to the heavy metal played all night at the town bar.  Something dark and terrible happened in the village hotel, something a number of key participants have kept hidden from everyone else.  Madness lurks in the blood, and the extreme conditions can drive others to fulfil their deepest, darkest urges.

As we move into the coldest part of the year, Fortitude is the perfect serial to put on while you  hunker under the blankets while the wind and rain howl outside.  Feel the cold as it creeps through your limbs, shudder at the howl of the polar bear lurking in the shadows and marvel at a television series that completely escaped the attention of the viewing world.  Fortunately, Fortitude will be back in a second series, but until that happens, enjoy this remarkable television show. Overall:  an unflinching examination of the evil that men do, even for the very best reasons, in an environment inimical to man, Fortitude is addictive television that will keep you up late into the night.  You might promise yourself you’ll go to bed after this episode, but your reviewer can almost guarantee you’ll stay for the next episode, then the next, and the one after that…  5/5

Visuals:  beautiful.  Crisp, with icy blues and sparkling whites in the landscape around Fortitude.  A good portion of the series is filmed at night, or out on the glaciers, and it is this visual landscape that gives the show extra character that adds to its compelling beauty.  Like its storytelling, the visuals are dark and brooding.  5/5

Audio:  from the opening titles all the way through the audio of the series is haunting.  On your reviewers set up, the dialogue came through crisp and clean, which, given how talky the series can be, doesn’t leave you struggling to understand the ebb and flow of the storytelling. 4/5

Filming in Iceland:  As beautiful as it is dangerous , the character of the landscape is as important to Fortitude as the actual characters in the series.  A real camaraderie is evident as filming took place in this remote location in Iceland.  3/5

On the Glacier: the immensity of the landscape is best exemplified by this brief snippet examining shooting on the glacier.  2/5

From Script to Screen:  creator and co-writer Simon Donald talks about the inspiration for him in creating Fortitude.  When someone as reserved and as serious about his craft as Christopher Eccleston is comes out and praises the script, you know that Donald and his team struck narrative gold. 3/5