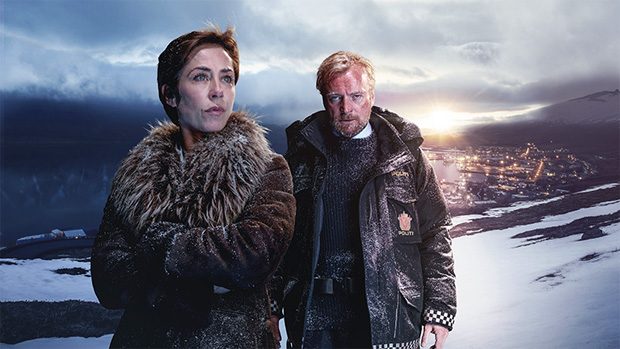 Summary: The Blood Aurora rides high over Fortitude, still struggling with the after effects of season one. From out of a snowstorm, comes a new evil, an evil that began seventy years ago...

After the harrowing and bizarre events of season one, the discovery of a headless corpse on the outskirts of the town of Fortitude signals a new horror the community must deal with. And when more decapitated bodies turn up, things get really strange.

Season one of Fortitude was characterised by a willingness to mash up genres (Scandi-noir and horror, for one) and packed with beautifully shot episodes, filled with wonderfully brooding performances that matched the isolation and harsh beauty of the landscape, Fortitude season one came from nowhere, an icy comet flashing across the sky. It seemed as if the story it set out to tell was neatly tied up at the end of the last episode. And yet a new season has just been screened, and is now available in all its glory on blu-ray. Underneath it all, looming larger than the murder of Christopher Eccelstone’s character as the instigating event, was the idea of nature running awry as climate change melted the glaciers. How does season two fare? After opening with a vignette set in 1942 which involves Nazis, and ending man screaming in horror (always a good start) the series begins proper in Fortitude. The community is still dealing with the aftermath of the wasp swarm, unearthed from the defrosted remains of a herd of mammoths excavated from beneath a melting glacier. Indeed, the series looks at the effects of climate change on the community, but also the effects of extreme isolation, darkness and cold on that community. Fortitude in some ways is like Twin Peaks – hard working people on the outside, but strange, twisted individuals on the inside, warped by distance and isolation. It’s a fascinating examination of a community almost cut off from the rest of society, doing its best to thrive in a world that increasingly ignores it.

The absence of Stanley Tucci and Michael Gambon are a clear negative. Both brought were magnetic on screen, and in their absence, the rest of the cast has to work extra hard to maintain the same levels of interest. Dennis Quaid as fisherman Michael Lennox, is the Hollywood name of choice. He provides the moral core of this series, but sometimes lacks the gravitas Tucci and especially Gambon brought to the first series. The survivors of the events in season one do their best to move on with their lives. Governor Hildur (Sofie Grabol) faces losing her job as the bureaucrats on Oslo plot against. Her marriage to Sergeant Eric Odegard (Bjorn Haraldsson) is on less than firm ground. Sheriff Anderssen (Richard Dormer) is found wandering the icy wastes, almost dead from alcohol poisoning. His erstwhile love interest, Elena (Veronica Echegui) is in a coma, under the less than tender ministrations of Dr Adebimpe (Jude Akuwudike) who may be more interested in Elena as an experiment, and not a patient.

Like all good noir, Fortitude takes its time to examine its characters, put them under the microscope, and make their lives a living hell. The acting is uniformly well done, and the location, which is beautifully shot, is brooding, dangerous and full of mystery. The mashup of murder mystery and horror works wonderfully well. Unlike in a city, the people of Fortitude are left to their own devices, wondering which of them will be the next victim, or more likely, the next to crack under the unending strain of cold and darkness. Season one seemingly appeared out of nowhere, a dark brooding examination of the frailties of humanity against a dangerous landscape. Season two meets heavy expectations, and with the addition of the World War Two element, exceeds them.