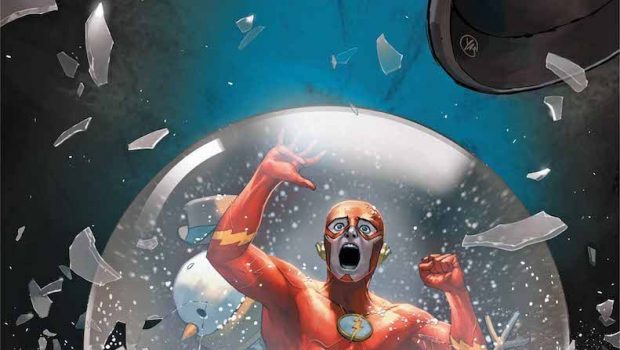 Summary: Barry Allen is back I for one, finally feel like this book is gaining some type of momentum.

Well, after numerous years (and I’m talking about more than just the New 52, Rebirth, and Flashpoint) we officially have Barry Allen back. Yes, he returned in 2008’s Final Crisis, but he was different, a shell of the man he used to be. Even when he was written competently, he was missing a spark (even when written by Flash super-fan Geoff Johns.) But this is silver age Barry Allen, one who is all smiles, no secrets, and while HE doesn’t call it that, he gives out some Flash facts. We haven’t seen Barry this happy in a LONG time.

Of course, now that he’s happy, nobody believes it. Kid Flash and (I can’t remember her name, so I’ll call her Flash Girl) are still quite cold to him. Kid Flash has his own reasons (Barry hiding EVERYTHING all the time from him) and Flash Girl because Barry abandoned them at a very inopportune time. He promises that there will be no more secrets and after much prodding, the two finally give. They follow Barry to the now reconstructed Flash museum, where they find a painting of the Flash Family. In a nod to the TV show, the painting sits on a wall that hides a secret lab Barry has named the speed lab. There resides Commander Cold and Steadfast, who help Barry relate the information that the Speed Force is dying. Kid and Girl Flash are still hesitant to trust Barry, but just as he seems to have talked them around, time slows to a crawl. One thing I love about this scene is the fact that Barry is the only one not affected. The other Flashes are losing their speed, as is Barry, but it becomes apparent that he’s still the fastest man alive. The reason why time has pretty much stopped is because our old friend The Black Flash has returned! The very best moment of this issue though, comes when Barry realizes he has no time to think, just time to act, and HE PUNCHES DEATH IN THE FACE! That is one hell of a resounding statement!

Black Flash mutters some words about “forces dying” and then kills Steadfast (or at least that’s what it looks like). So that is possibly a quite brief character run.

Barry Allen is back I for one, finally feel like this book is gaining some type of momentum.