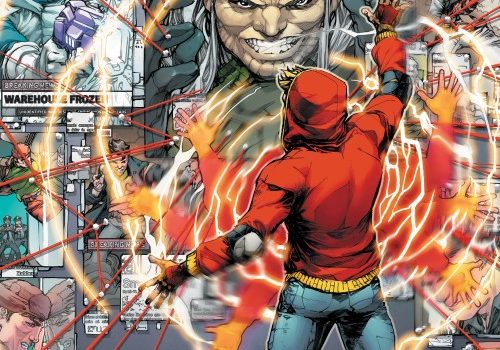 Summary: The Flash #72 had a nice cliffhanger, but I’m finally ready for this journey through memories to end and the forces to figure themselves out.

Since the start of the New 52, there have been 3 books that have never left my pull list: Justice League, Batman, and The Flash. That’s 8 years of teams, Dark Knights, and Scarlet Speedsters. But that record is in great danger of ending because the Flash is stuck in a rut and I can’t for life of me figure out how DC manages to take their fastest character (literally) and bring him to a crawl.

The story of Flash: Year One is not an issue. It’s not the fact that he’s fighting the turtle that that’s the problem. It’s not even the apparent constant edict “we have to keep Barry and Iris together but not really”. It’s the fact that that’s all this book has been doing for a helluva lot of issues.

Before I continue this rant, I’ll briefly mention the issue. It was fine. Barry is slowly getting used to his powers and saving people and in a really nice moment, throws what is apparently his first punch. There is also a nice little moment where Iris gets tired of Barry always being late and takes matters into her own hands.

Back to my rant. The idea of each force getting their own little storyline is fine, but now that has been going on since issue 50 (if I’m not mistaken.) Barry is simply not progressing (yes, I know it’s comics and even if he does progress, a reboot will kick in and he’ll start all over). For years Barry Allen was a shining example of making good choices and even when he made bad ones, he tried his best to fix them. All Barry keeps doing is pushing Iris and Wallace (new Wally) away, apologizing for it, and then doing it again.  Add to the fact that now we are having a 5- issue flashback just slows the story down more. Now, I know Barry has to remember something important and that some guy in a cloak made him go on this little journey, but we need some closure to all of this and soon.