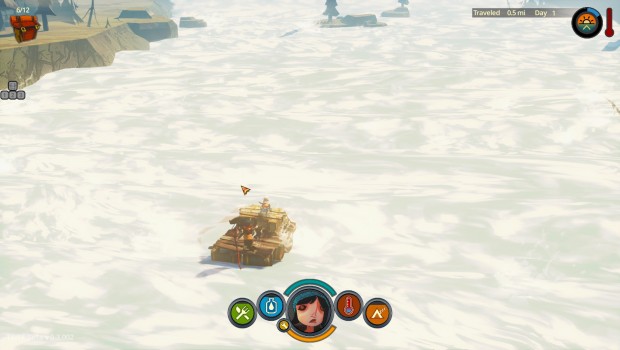 Summary: The Flame in the Flood is beautiful but dangerous: watch out for wild boars being jerks.

There is a moment, very early on, where young protagonist Scout first steps onto the rickety, makeshift raft—new canine companion Aesop in tow—and casts off from relative safety in search of hope. The camera draws back and frames the great, flowing river. And sure, okay: everything looks stunning, and the view perfectly captures the beauty and fragility of life in this disaster-ravaged world. We mustn’t forget to mention how the water manages to look almost serene and comforting, that lifeline allowing Scout and Aesop to travel towards salvation, but then also retain its sense of foreboding and treachery, able to plunge them both into despair at a moment’s notice. Those are the things you notice, fine. But then the acoustic guitar picks up. It has been there since the beginning, the music, but much more subtle, reserved. Mood-setting, but unobtrusive. But once the raft has cast off, that first electrifying twang sends a shiver throughout my whole body. ‘This is it!’ the guitar says—not with words, but still with a language I can understand. There’s a sense of enthusiasm as the journey starts. Scout and Aesop float downstream, gently at first, carried along as much by the current as by the music. But it still retains that slight melancholic tinge, in the same way that a lot of country music is upbeat but somehow leaves you feeling like there’s a depressing edge lurking just out of sight.

This river theme is the true hero of The Flame in the Flood and ties everything together. It changes as Scout and Aesop sail further downstream, mapping itself to the emotional progression as much as the literal, physical progression. After the initial burst of nervous bravado wears off, the music disappears—you’re left with only the tranquil sound of water rushing around you. The journey has begun and this brief respite is for reflection. Later, the guitar gives way to a harmonica and vocals. Night falls, and the trees—which seem more gnarled and vicious in the dark—become interspersed with hungry, beastly eyes. It begins to rain, as both the harmonica and male vocalist wail like tragedy-laden wind. This will not be an easy, relaxing jaunt down river; there are very real dangers—starvation, hypothermia, wolves, infection—to contend with. But still, the music maintains an air of defiance or, perhaps more accurately, reverence: the great river, somewhat personified or deity-like now, might be cruel and harsh at times, but it also provides access to resources and a means of transit.

And so it does: travelling down river allows Scout and Aesop to find more locations to scavenge the resources they need to survive. Staying put simply isn’t an option, but it creates an interesting dilemma: push to sail as far down the river as fast as possible in the hope of finding sanctuary sooner, or disembark at as many locations as possible to forage for food and resources, take cover from the rain, and rest on a makeshift bed in relative safety? The Flame in the Flood certainly captures that survivalist element. Even relying on worms for food and rainwater to quench your thirst, sitting still won’t save you, especially if the world’s gone to hell and there isn’t anybody looking for you. But there’s not guarantee you can find everything you need, and you can’t take everything with you. So you improvise. You adapt. You try, desperately, valiantly, to survive. What lies at the end of the river? Who knows; not me, certainly. Drowning, infected wounds, and hyper-aggressive boars saw to that. There might not even be an end; maybe the first quest—find a better signal for your radio—is an impossible task. Maybe The Flame in the Flood is the aquatic equivalent to Cormac McCarthy’s The Road: hope is the sole force compelling people to survive. If this is the case, then I cannot help but love The Flame in the Flood more: it is a truly depressing world in which it is still possible to find joy, to find hope.

Maybe nothing lies at the end of the river. Maybe it is woodlands after abandoned church after clearing with a broken bus, endlessly offering slight resupplies until something catches up with poor Scout. But, even so, we—you, me, Scout—have to keep trying. It’s the only real option we have left to us. That, and listening to a phenomenal soundtrack.