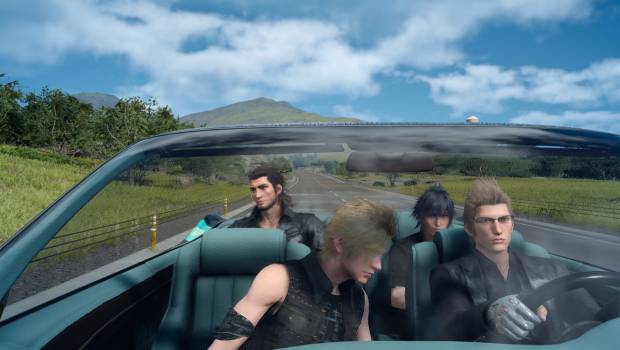 Summary: An honest, captivating ride-along with four best friends who just so happen to save the world through the power of friendship.

When I was younger, I would celebrate each birthday with my three best friends. We spent the weekend playing videogames or exploring or just generally having fun. It was, of course, a much simpler time for us, but it was also just as important. Final Fantasy XV captures the essence of those experiences—and then projects it into a future: four best friends—not pre-teens, but young adults—embark on a road-trip, seeking diversion and adventure.

Final Fantasy XV has an extinction-level threat to the world. It has a megalomaniacal villain, a gallant but doomed king, a beautiful princess. It has monsters and magic and hidden tombs behind waterfalls. But none of that is important. Final Fantasy XV is about four young men, about platonic intimacy—physical and emotional—and closeness. It is a videogame bildungsroman: a coming-of-age story about a boy too petulant and self-centred to eat his greens becoming a man—a king—willing to sacrifice himself for the betterment of the world, and the friends who help him to grow and mature. Much of my time with Final Fantasy XV is spent watching team-dad Ignis drive the ostentatious Regalia around the world. Gladiolus—hypermasculinity oozing from him like sweat dripping down his uncovered abdominal muscles—sits in the rear, reading. The waifish Prompto snaps mementos with his camera. Post-emo pretty boy Noctis flagrantly violates vehicle safety regulations. Prompto, clearly influenced by his friend’s blatant disregard for safety, turns around to converse. Noctis passes a thermos forward; Ignis consumes his favourite brand of coffee, earned through his position as primary driver at least thrice over. Rain clouds roll overhead; the hardtop of the Regalia folds out, protecting the passengers from the rain—and, at long last, from their own poor vehicle safety practices. Final Fantasy XV shirks many of the expected conventions by using the road-trip as a narrative vehicle. False climaxes litter the videogame, threatening to bring the journey to an end and enforce structure and routine—which, inevitably, unfortunately, does eventually arrive. I have no problem with the overarching goals and time limits imprinted onto the journey—the nuptials of Noctis and Lunafreya, the fall of Insomnia, and gaining the blessings of the Six all catalyse interactions between Noctis and his friends. But these traditional story beats also feel unnecessary when compared to the arcs of the characters. Prompto finding the courage to finally shed his sensation of being an outsider while trying to explain to Noctis why being friends with royalty isn’t easy—no aggressive Empire, divine beings, or any other pretext for conflict is needed to propel that narrative to its satisfying resolution. Four friends procrastinating the rest of their lives in lieu of more time together, camped out under the stars, sounds like a perfectly fine plan to me.

That kind of thing won’t suit everybody. But then Final Fantasy XV, as it is, won’t suit everybody. A friend remarked, as I watched Ignis drive the crew to their next diversion, that it ‘looked boring’. Final Fantasy XV simplifies systems to encourage accessibility and emphasise the right parts: driving can be automated, because long, slow car rides are part of the experience; combat is a largely one-button affair to allow for spectacular combination attacks between the guys and ensure this secondary detail does not complicate or overly distract from the priority. But for me, Final Fantasy XV isn’t boring, even when I’ve climbed the Rock of Ravatogh for the fourth time or caught my thirtieth fish or had to stop at a servo to refuel. It is at its most exciting when I watch men—who might otherwise be trapped by notions of toxic masculinity—make themselves emotionally vulnerable to each other, share a delicious meal by firelight, or exchange words of kindness and support. Final Fantasy XV knows this; it is why the player is rewarded with Game Mechanic Enhancements™ like experience points for taking long trips by car or chocobo, or by being earnest with friends, foes, and acquaintances alike.