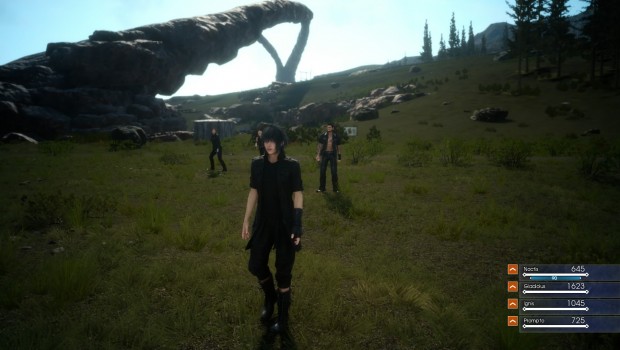 Final Fantasy XV was first announced in 2006 as Final Fantasy Versus XIII, part of the Fabula Nova Crystallis collection. Nine years ago, Final Fantasy XII was still a fresh commodity and I was a depressed 14-year-old who found himself unsurprisingly drawn to the pensive-looking, sword-wielding dark-haired dude gracing the promotional images for this bizarre new pseudo-spin off title.

The journey to this point—for both Final Fantasy XV and myself—has been one fraught with obstacles and communication breakdowns. For a long time, Final Fantasy Versus XIII disappeared from the public space. Everybody was talking about it, but Square Enix refused to comment. Was it vapour-ware? How far were we from release? Final Fantasy XIII was released for international audiences in late 2010. Its unexpected sequel released in 2012. And the third in 2014. Two-year development cycles—excusing the initial four-year turnaround—and yet few hints about Versus XIII. When Square Enix re-announced that Final Fantasy Versus XIII was not dead, that it would be rebranded as Final Fantasy XV, and please be excited, I was sceptical. Square Enix had, in a multitude of ways, been a disappointment and the lack of communication served only to worsen the betrayal. Just say you’re waiting for next gen. Just say there have been some delays. Just be upfront, and we would all stand behind you. But by the time these announcements finally came, I was utterly disillusioned with the franchise and its parent company.

Cue Episode Duscae. My first indication that it even existed was a photo taken by a friend with a mobile phone and uploaded to Facebook. It showed Noctis in his awkward three-quarter pants and almost-gumboots staring at an impressive rocky arch in the distance. My friend continued to post photos of dubious quality while I let this knowledge congeal. Final Fantasy XV was, in a way, finally here—am I interested? And then the code came and I couldn’t supress that hint of excitement. Suddenly I was 14-years-old again and Final Fantasy was my favourite videogame series by far and my schoolwork is merely an exercise in trying to include as many references to these videogames as possible.

Final Fantasy XV Episode Duscae begins with an obnoxious alarm tone and a group of groggy heroes. The camera sweeps around as Gladiolus, Ignis, and Prompto waken inside an incredibly spacious tent. But Noctis struggles. He rolls over, away from the alarm tone. He sits up… and then lies back down. He’s been sleeping a very long time—nine years—and he’s not sure if he’s ready to face the world. Eventually, he does get up and stumble after his friends. We are blinded as he exits the tent, bright morning sun blaring down. But as his eyes adjust, we are greeted with a beautiful panorama. I am not a champion of photorealism in videogames—a complementary art style is more important to me—but Final Fantasy XV is absolutely gorgeous. The natural and fantastical are seamlessly blended. It feels perfectly normal to stroll down a highway, or hang out by the caravan at the chocobo ranch. The gas station has an attendant wearing a dorky uniform. Stop a car on the road and peek in and you will find a high-res driver model. The attention to detail is impressive, but doesn’t feel glorified; this world just exists. Yes, it’s beautiful, but so is our world—all you have to do is look.

Episode Duscae is quick to hand the player control (though the initial quest set-up and mini-tutorial could stand to be briefer) which is unusual compared to recent titles. Final Fantasy Type-0 HD, with which the Episode Duscae demo is bundled, has fourteen minutes of cutscenes before the player does anything. But Square Enix doesn’t have an incomprehensible premise to establish here: four guys need to repair their car so they can get to a place called Cauthess. Simple. Unobtrusive. I fear that the full release will ruin this, but Episode Duscae’s controlled delivery of plot has me hopeful. The real-time action combat is a large departure from previous main series entries. Final Fantasy XII tried the seamless transition, but combat still felt slow and methodical. Final Fantasy XIII had a more frantic approach to combat, but it took part on a separate battle plan and offered the player no control of movement. Final Fantasy XV seems to have found the perfect blend. Noctis can use warp-strike to quickly initiate combat and move around the battlefield. Dodging is handled via a single button, but successful dodges use MP, which means that physically moving away from enemies and taking cover is necessary. Combat feels more tactile, responsive, and dynamic; a quick overlay showing experience earned is all the intrusion and Noctis is still fully controllable whenever this happens.

Episode Duscae has already convinced me—undone almost a decade of concerns—but there is one last thing I was particularly thrilled by: character interaction. While talking to NPCs is still generally static, the other party members move about in the background, making existence within Final Fantasy XV seem more organic. Noctis and friends talk and joke and generally act like real human beings as they wander about and fight. And the dialogue sounds believable. It’s not stodgy, overly formal, or deliberately trying to evoke ye olde English. They talk like real people, and cutscenes are particularly enjoyable because of the added non-verbal cues; the opening scene immediately establishes the sort of relationship all four characters share solely through touches on the shoulder, and so on. As a demo, it’s impossible to foresee exactly what Final Fantasy XV will be like. Maybe Episode Duscae is the brief Gran Pulse in Final Fantasy XIII’s incredibly linear and convoluted experience. Maybe the actual opening cinematic will be a fifteen minute ordeal about tangentially relevant details that the player has absolutely no incentive to know or care about yet. But if the final product ends up even halfway close to how enjoyable those few hours of Episode Duscae are, then we have a Final Fantasy title to truly get out of bed for. Don’t let me down, Square Enix.