Empress #5 continues on with the desperate and chaotic story of escape and survival that we have been following since the very beginning. Throughout this journey, the volume has been gradually increasing and we are now at the point where it’s an almighty crescendo! Emporia, Captain Havelock and her children have been on a non-stop race through space, trying to desperately escape the wrath of King Morax. I’m stressed, they’re stressed, we’re all stressed! We come into this issue directly where the previous one finished. Emporia has been separated from her children after they were all taken prisoner by a rag-tag group of space scavengers. At the end of the previous issue, Emporia, Havelock and Tor commandeered the ship from their captors and they are now desperate to start searching for the children. There is just one problem…they are stranded on a remote planet with a fanatical cult and are about to be hurtled into a boiling pit of doom! Indiana Jones and The Temple of Doom comes to mind. Emporia’s children are about to be auctioned off as potential slaves, however as we soon discover, their captors have made the mistake of locking the children in a garbage tip, which Emporia’s daughter, Aine, refers to as a workshop. Never underestimate a brilliant mind that is both resourceful and inventive. The pace is fast, things get hectic and we are once again left with an incredible nail-biting cliff hanger! There is a deep sense of panic and desperation in this issue, as our escapees fight for their freedom and safety. Our fugitives have had non-stop action and mayhem since escaping from King Morax, yet fatigue and weakness have yet to plague them, I guess that’s because they haven’t had the chance to allow it to. If they stop, they die! This story so far has been one long chase sequence and Mark Millar has done an excellent job at keeping things interesting and engaging. Not once have I been bored or found it tedious to read, instead I find it dramatic, thrilling and a lot of fun. Millar has also done an exceptional job with the character development and it really feels like with each issue that we discover more about them. Exchanges between Emporia and her children has been minimal and fleeting, however those moments are personal and heart-felt, just how you’d expect a protective mother to be. This all creates some very poignant moments, which ultimately makes these characters more relatable, which in turn makes you care about them and their plight. This also contrasts with the brutal King Morax. He has only been seen occasionally throughout the story so far, however each time we do encounter him, his cruelty and brutality increases and we quickly learn that this is a formidable character that will do anything to achieve his goal of capturing Emporia and his children. Without a care as to who he executes in the process. Stuart Immonen’s art is excellent. I seriously can’t fault it one bit. During the action scenes and fight sequences, he captures a real sense of the fluidity of movement and this coupled with the overlaying of his panels all comes together to create some interesting and complex visual scenes. I also really enjoy Immonen’s creative flare when it comes to alien races, their planets and technology. The spacecraft’s are complex and interesting and the scenes on the alien planet of Nakamoor are visually epic and filled with a level of detail that makes you want to pull back an take it all in. He’s quickly becoming one of my favourite artists working in the industry today. Ive Svorcina’s colouring once again heightens the overall mood and tone of each scene. I find the colour palette to be quite beautiful and effective at capturing that cinematic quality that we’ve come to expect from space-operas. It all creates a real sense of an other-worldly atmosphere, which I find to be very effective with assisting the storytelling. So far I’m thoroughly enjoying Empress and this weird and wonderful chase through space that Millar and Immonen have created for us. This issue delivers more intense nail-biting moments and swashbuckling heroics, all framed in an epic space opera backdrop. I’m looking forward to the next issue and the conclusion of the first story arc and hopefully getting an answer to the one question I have. Will our escapees evade death and danger one final time and be able to find their safe sanctuary? 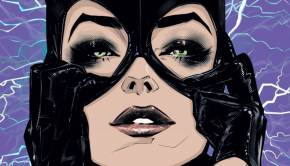