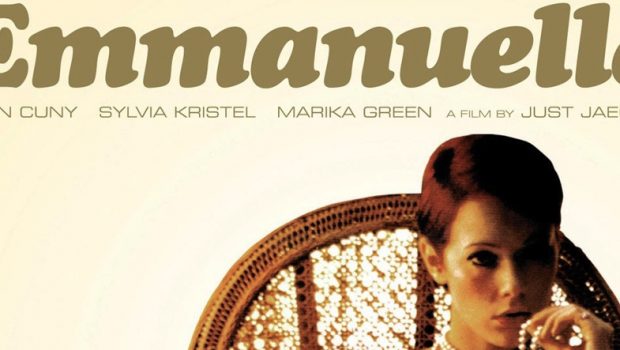 I had a fairly liberal upbringing, my parents were very open to talking about pretty much any topic. It’s not too surprising perhaps that the title Emmanuelle was familiar to me… though I had never watched it, so when the opportunity came about I thought it would be a good chance to find out what this (in)famous film was all about.

The general premise is that Emmanuelle is recently married to Jean an older man who’s job as a diplomat takes him away from home quite often. The relationship is not a traditional marriage however, Jean believes in a sexually open relationship and actively encourages Emmanuelle to explore pleasure. In a number of ways this could be seen as very progressive, a film that focuses on a woman and her own sexual desires and exploration… to an extent it is… but it is not without flaws and especially in the current #metoo climate, it’s easy to see some pretty big issues with the story. To be honest there’s not a lot I can do to “spoil” the story here… much like the “hardcore” version of these sorts of films… the story is not exactly a deep philosophical exploration… it’s more one set up after another to facilitate scenes of sexual activity. With that in mind… the main issue I have with the film is the notion that it is all about Emmanuelle’s sexual desires and “awakening”. There are elements that do fit that notion… but there are also portions of the film that involve non consensual sex (this is true for both Emmanuelle 1 and 2). I am aware that there can be a sexual fantasy around rape… but the key difference is that in that fantasy though control is given over to the other person(s) there is still intrinsically consent. Emmanuelle 1 and 2 depict rape in a way that does not allow for the notion that it is merely a fantasy scenario and that raises a lot of issues. Even if you take the notion of rape out of the film, there is still the issue of male control over female sexual pleasure. This isn’t such an issue for Emmanuelle 2 but is unquestionable in the original film in which Emmanuelle does exactly as Jean insists, she goes off to seek her own pleasure… when Jean finds she is not around and he has no idea what is going on… he shows his jealousy and sets about exhibiting his control. But if these issues don’t bother you then you are left with an interesting time capsule of sorts for movie making and sexual attitudes of the time. The first movie is far more rough around the edges than the second. Clearly the success of the first film allowed for a budget that brought in better cinematography and overall polish. It also seems as though the second film found where the line was for allowable material in a film and tried to push those boundaries further… having said that, the first film does show a new way of smoking that may avoid mouth cancer… but might put another body part at risk. The video transfer is pretty decent considering the age of the film, it’s not something that you would mistake for a modern film at all… but it holds up reasonably well. Emmanuelle 2 fairs far better than the original, which is no doubt thanks to a bigger budget and more attention being paid to the production.

If you are after some erotica that both men and women can enjoy… I would have to think there are probably better options. I can understand how this made a name for itself at the time, but there are too many questionable aspects to the film (grinning while being told someone’s Rape story and then later referring to it as a “boring rape story” just doesn’t sit well with me). If you are after nudity and a degree of sexual freedom then perhaps this will be up your alley… but again I can’t help but think there are better examples that are perhaps a bit more endearing.

Consumer Advice – Restricted to 18 and over