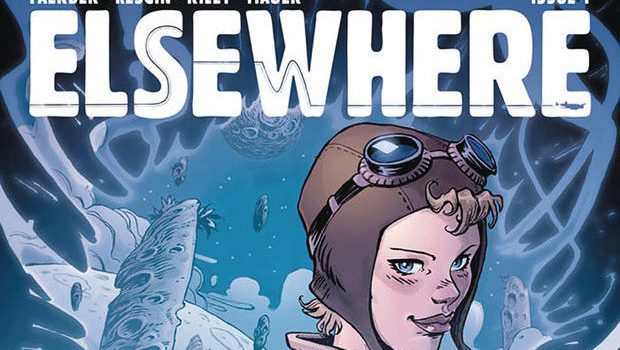 A stunning and whimsical fantasy

Have you ever wondered what happened to all those celebrities who just up and vanish? What about the explorers and adventurers who disappear off the face of the Earth like, say, Amelia Earhart? Did they really vanish? Were they abducted by Aliens? Did they meet an untimely demise? Or did they fake their deaths so that they could live an anonymous life in suburbia away from the hullablloo their celebrity and achievements garnered them. These questions have fed TV specials, newspaper articles, and books for well over a century. Now Copperhead writer Jay Faerber has joined with artist Sumeyye Kesgin to give us the answers in a fun and beautiful new series, Elsewhere. So, if an other-worldly adventure with a famous heroine sounds like your flight of fantasy then read on, intrepid adventurer.

Elsewhere is a new series that explores an alternate world where missing celebrities turn up, only not on this planet. The story begins with two strange characters,  Cort and Tavel, as they escape from a prison in Korvath. They are not your run of the mill prisoners and they are certainly not human. In the midst of their prison break, they stumble upon a stranded woman dangling from a tree by her parachute strings. They are more surprised by her unique appearance than she is by their distinctive alieness. But then, she is Amelia Earhart and so of course she takes it in her heroic stride. Thus, begins one unusual fantasy. For those that don’t know, Amelia Earhart was a female aerial pioneer and adventurer. Her list of accomplishments makes the rest of us mere mortals seem boring AF. She was the first woman to fly solo across the Atlantic. She flew across America numerous times, and set many other flying records. She loved flying and even raced competitively. In 1937 she attempted to circumnavigate the world solo. She would have been the first woman to do this and she would take the longest route to date along the equator. She left on May 20 1937, and averaged between 250 and 2550 nautical miles a day all the way through to July 2. She flew from Darwin, Australia on the 29th of June and arrived safely in New Guinea. Her longest leg was to be from New Guinea to Howland Island. It was 2556 NM. She left New Guinea, but never arrived at her destination.

Earhart reported difficulty with her radio and navigation equipment in her last transmission. Her body was never found and her disappearance led to a host of theories. Some argued that she was captured by the Japanese; others that she was stranded on a desert island; and some speculated that she changed her identity having failed to complete her attempt. Recently an image has surfaced suggesting she may have survived. Her story is amazing. And she was a hero in her own right. Faerber and Kesgin do justice to her legacy in the first issue of Elsewhere. Elsewhere is an engaging story so far. The narrative is peculiar and fun. It is evocative of fantasies like Stephen Donaldson’s The Chronicles of Thomas Covenant, Lewis Caroll’s Alice stories, and CS Lewis’ Narnia series. It works well in tone and feel. The first issue is all about world building, character development, and a touch of background. Rather than rushing headfirst into copious action Kesgin and Faerber take the time to establish the land of Korvath. It is a realm that has its own flora, fauna, and physics on top of political turmoil. This makes a change from series which seem to feel flat by cramming too much in a debut. There is a sense of free spirited fun being developed in Elsewhere that made it a joy to read.

Elsewhere is a comic of striking hues and great drawings. Kesgin balances pretty landscapes with heroic characters in great balance of colours. She is a talented artist, and her panels are a pleasure to view. Korvath is a very pretty world, replete with alien flora, strange steeds, and gravity defying landscapes. The fantasy world she develops is burnished with alien tech that brings an element of the ominous to its wistful tone. She’s done a great job of bringing Amelia, in her trademark flight suit, to life. Faerber and Kesgin humanise her well, she’s not just a hero: she’s a rounded complex person. There’s a particularly touching moment involving her new mode of transport that hits the perfect note. Together Kesgin and Faerber have crafted a great world with an engaging lead. This is a fun tale and full of surprises and humour. It’s awesome to see a trailblazer like Earhart live on. I enjoyed reading this on my own as much as I did again with my daughters, who both loved it! I can’t wait to see where this story ends up, because it’s certainly off to a flying start.