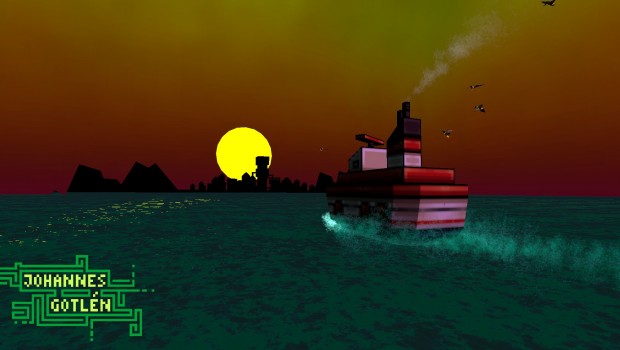 Summary: else Heart.Break() is weird adventure in a strange, techno-centric world that hasn't yet lost its human fondness for romance or the bizarre.

else Heart.Break() is weird. The PS2-era styled game—absolutely gorgeous, despite the characters all having kaleidoscopic eyes—is about a young guy called Sebastian leaving home and embarking on his metaphoric journey to adulthood and self-determination. After taking a shady job selling soda from a suspicious guy on the other end of the phone, Sebastian jumps on a ferry and ends up in the bizarre island-city of Dorisburg.

In a lot of ways, Dorisburg does feel alive: people are constantly moving, heading to their jobs, going out to parties, interacting with each other. You’ll start to recognise some of them, and they’ll recognise you. ‘I told you, I don’t want any soda!’ some may shout at you, after you pester them for the twentieth time to buy a can of soda that you know tastes like garbage. But there are times where it becomes more obvious that these ‘people’ are constructs. The very first section, at home having dinner with his parents, Sebastian can steal all the food off the table and pocket the house phone with nary a whisper of complaint. The characters are human-like, but not human. But that is, of course, part of the surrealist charm. Right from the get-go, it’s clear that something isn’t quite right. It creeps in from the edges at first: your hotel door leads to a bathroom, and when you exit, you exit from an entirely different door. Strange people in suits wander about the town. People gossip about ‘the ministry’. Before long, you’re in the thick of it—assuming you even decide to wade in.

else Heart.Break() causes this strange, paradoxical feeling in me: all I want to do is relax, have coffee at a trendy café, head to a party with friends, maybe hack a couple lamps, and Dorisburg seems to cater for that; but, at the same time, I feel this inescapable time pressure, like I haven’t sold enough soda and I haven’t slept in four days because of coffee and there are still too many things to do before the inevitability of death. It’s… unsettling. Part of that pressure stems from else Heart.Break()’s focus on programming. Working with code takes centre stage early on; for inexperienced players, it will feel like an enormous obstacle. That the game offers ten dense written guides on various programming principles makes the challenge seem no smaller. Thankfully, a handful of NPCs serve as tutors and teach smaller, specific elements (with practical components!), which makes things seem a lot less daunting. The biggest challenge, however, is learning that particular kind of problem-solving logic, which can’t be picked up in a few minutes. My initial struggles with the programming in else Heart.Break() served only to remind me of my struggles with programming in life, particularly as I grapple with my videogame-related doctoral project. The game fuels my concerns about there never being enough time, even if the actual deadlines are distant and I can work at a relaxed pace. I don’t know whether or not the programming mechanic works. It’s a popular trend, with games like Hacknet and Hack ‘n’ Slash giving players varying degrees of insight into code. And tinkering with everyday objects in else Heart.Break() is definitely enjoyable—nothing quite like creating a coffee that make you more attractive and take three steps to the right every time you drink it. But the learning curve seems far too steep for a novice, even if the skills you need to figure out most puzzles aren’t that complicated. Regardless, I like it. Even if it doesn’t work as a legitimate learning tool, else Heart.Break() gives an intriguing first glance into the world of code.

At the end of the day, I view else Heart.Break() a lot like life: I don’t know what to do, I don’t really get it, but I’m definitely having fun figuring it out along the way. For all its over-abundance of technology, else Heart.Break() is still a very human experience.